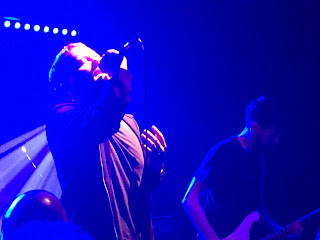 The second night of The Slow Readers Club two-show Independent Venue Week activities took them to our favourite independent venue in the world, The Trades Club at Hebden Bridge for a hot, emotional and sweaty night, the intimacy of which we might not see again. Support came again from a very well-received set from Bolton's James Holt.

With some of the crowd making the short journey into the Pennines from last night's show in Bury, James Holt doesn't need to worry about the crowd's unfamiliarity with him although there is noticeably more chatter tonight than the night before. He, and those down the front who are engrossed in his songs, care little though as he regales them with stories of the songs again, but with a different slant on them that show he's not just learnt between song chat to recite. It's something that translates to the music too, his meticulous attention to detail in the songs results, and it is usually isn't the case, in songs that tug and pull and let go of the heartstrings and emotions. Come Out To Play is a wistful look at a childhood lost in books and no fun, whilst opener Alone Again hints at melancholy without dropping us down into darkness. His quirky shirts and his ability to laugh at himself in that context have really endeared him to the Readers crowd over the two nights. 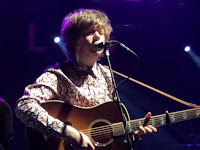 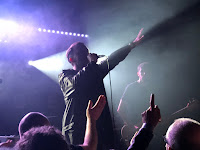 Coming on to the strains of Madonna's Into The Groove, it's clear that tonight's audience is a little more rowdy as it's a Friday. There's the now familiar calling card of READERS that stops them from continuing into the next song at points such is the intensity that it gets hollered back and a whole host of shouts that only the band's growing community will understand ("Love you Jim" and "RATS" being two) and Aaron tells us we're going to get a more conventional set than last night's Cavalcade run-through. From the minute the first strains of Fool For Your Philosophy strike up till the dying embers of cheers after the communal exorcism of I Saw A Ghost, the Trades floor is in danger of collapse under the weight of bouncing bodies. This feels like the last party before going supernova as it's seeming increasingly likely is to be their fate this year when album three drops.

Some of these songs might not get heard again for a while as the set changes to incorporate the new tracks, of which we only hear the recent single Lunatic and the new band "we quite like it" and crowd favourite You Opened Up My Heart tonight. So whilst we might be bidding farewell to the likes of Days Like This Will Break Your Heart, Don't Mind and Know The Day Will Come from the set for some time, they're given a rousing send off. The sound, as ever in the Trades, is top-notch and the light show, often so central to the visual aspect of the band, has been adapted for the situation perfectly. 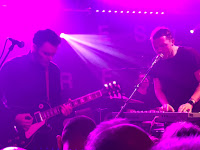 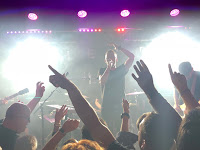 Whilst his band mates create the huge sound that the Readers have now mastered, Aaron has taken to the role of engaging front man in a manner that more celebrated fellow Mancunians should take note of. He probably clasps the hand of everyone in the first five rows at some point of the evening as he leans forward over us, avoiding being dragged into us by the skin of his teeth, laughs off getting the song order wrong "I'm a slow reader" and calls for taking more off once he ditches his now trademark raincoat and telling us that he's glad we know the words as he loses the mic cord during one of Forever In Your Debt's soaring choruses. Jim pounds the stage so hard in his trademark marching style that you fear for the boards, whilst Kurt as ever looks effortlessly cool and Dave makes providing the beat that underpins so much of these uplifting anthems with a precision that allows everything else to flow look like child's play.

The sight of two hundred arms raised mimicking the clock action during Start Again and that incessant chanting must be such a vindication for the band after years of struggling to get past one man and his dog clapping at their shows. One look around the room at everyone knowing the words to every single song sends a shiver up the spine of this observer, so you can only start to imagine how it feels for the four of them. The songs from their debut, now over six years old, feel like they're fresh out of the songwriting process - Feet On Fire, Sirens and One More Minute could easily have been consigned to the huge heap of lost Manchester classic tunes, but here and now they feel like they're made for academies and arenas. The aforementioned Days Like This Will Break Your Heart, Don't Mind and Secrets, only played for the second time here, show a different side to the band as well and the crowd response appropriately during the quieter moments.

Tonight feels like a celebration, the party that brings together those who were there at the start, nearly a decade ago, with those that have joined along the way and those new to the cause into one small beautiful room in Hebden Bridge, home of much magic of its own. We might not see them in a venue this intimate where you can see the whites of their eyes so clearly and reach out and touch them, but this is going to stick in the memory as much as any other show, past or in their glorious future.

The Slow Readers Club played Fool For Your Philosophy, Sirens, Start Again, Plant The Seed, Days Like This Will Break Your Heart, Don't Mind, Feet On Fire, One More Minute, Grace Of God, Secrets, Block Out The Sun, Lunatic, You Opened Up My Heart, Know The Day Will Come, Cavalcade, Forever In Your Debt and I Saw A Ghost.