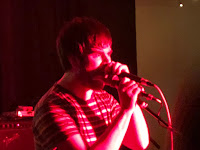 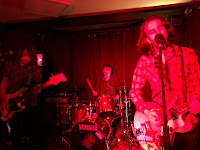 Episode thirty one of the Astral Elevator psyche night brought together two local bands with a growing following to the basement of Manchester's Peer Hat to play two very contrasting sets, but ones that remained true to the underground night's ethos of trying to do things differently.

Opening proceedings are Hey Bulldog and there's a substantial crowd in already for a band that's making its name for itself with some stunning live performances with attention to levels of detail in their performance that have traditional music fans purring with delight. At times the need for a song is almost irrelevant as it's their craft that draws people into their web, but they've got those songs too. Their magic though is in the way Rob, Matt and Ben lock into an intuitive groove and run with it, each knowing exactly what the other will do next instinctively. Down the front you witness people losing themselves in the same manner.

To label them psyche would be lazy as there's so many influences at play in their songs, particularly in the live environment. There's hints of blues, classic and glam rock, and whilst we use the word song, they're more like journeys as they're not constructed in the traditional verse / chorus / verse / chorus / middle eight / chorus structure that bands of lesser aptitude might employ. Songs like If They Could See and Find The Sun, which are joined at the hip, are a journey that they take us on.

No Future Part 2 reminds us of early Inspiral Carpets, although others talk about New Order, but it's testament to the fact that Hey Bulldog aren't afraid to mix it up, Rob ditching his guitar for a rather minimal looking keyboard set-up and in its seven minute journey it never once outstays its welcome. Next single Al Lupo is a different beast all together, its hurrying rhythm is an invitation to jump in and lose yourself in the song until it concludes in a wall of looped vocals. They finish with two early singles - Under My Spell and Divide And Conquer - which allows each of them, Ben's drums one moment, Matt's bass the next and then a solo from Rob to take the lead that the other two follow.

That they can pull off so many different approaches to their songs might hinder them in the long-term as they're impossible to put in a convenient box for public consumption, but in these intimate surroundings all eyes and ears are fixed on what they're doing. 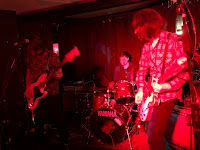 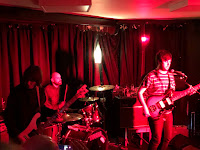 Déjà Vega are something of a phenomenon. Their recorded output today is fairly limited as label issues have meant their debut album is currently sat gathering dust somewhere on a shelf, but of tonight's six song set, two tracks, bang in the middle, are completely new and the ten-minute version of The Test that completes the set has Jack in amongst the crowd, improvising words, yelled with a ferocity that could blow away the first few rows if they weren't lost in their own world of throwing themselves around and into each other.

The opening three tracks come from the as-yet-untitled album - Telephone Voice, Mr Powder and Eyes Of Steel - already have the packed crowd bounding around. Déjà Vega's weapons are basic and blunt ones, a guitar, a bass, a drum kit and a set of magical pedals that twist and turn everything inside out with a blood-curling intensity that could scare off the weak-willed. It's helped by a fabulous sound set-up that prevents everything muddying together. The shards of bass, the incessant pounding beat of the drums are accentuated, allowing Jack's voice to drive through the sonic chaos that they're causing in these three songs. At points it looks like Jack's been possessed by some musical spirit that's taken control of his body and made him impervious to everything else but the song. Quite how they'll have replicated it on wax is anyone's guess.

As is de rigeur for bands emerging from Manchester, they've got their own chant, a call and response of the two words of their name, a sign of the love that's grown for the band in the past couple of years. Each and every show they play is different, not for them the same six songs played in the same order for twelve months. The new songs show their versatility, the first one, so new it doesn't have a song, is a little more restrained, eschewing the brutality of what's gone before for something that has, for want of a better word, a groove running through it accompanied by a falsetto voice in parts of it. The second one, Sleep, scurries around frantically, looking for a point to stand still which it never does in its two minute journey.

The Test though is something else. It's a song that never ever gets played close to the same twice, extended into a jam that no one knows the next move until it's made. The song's main riff sends half the venue into a sweating heaving mass of one and when it hits the first of its many breakdowns, it veers off at a tangent, Jack leading the way screaming an incomprehensible torrent of words with an anger in his eyes that could terrify were we not lost in the spontaneous chaos that he, Mike and Tom create. As it finally crashes to a close ten minutes in, the response is overwhelming.

We head out to another gig before headliners Juju, feeling a little sorry for them having to follow that.