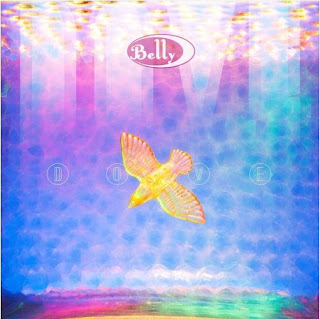 Dove is the reformed Belly's first album since 1995's King. Self-released via a Pledge campaign that was set up following a successful reunion tour in mid 2016, the album draws from their two 1990s albums Star and King enough to make it very obviously a Belly album, but they've also given it a modern shine and with no pressure for commercial success and the band clearly having more fun than they ever did in the past as a result, it's the perfect comeback, greater than the sum of its parts and the expectations placed on it.

Mine opens up the album and sets out the stall from the start, all luxurious vocal harmonies ushering in Tanya’s unmistakable voice. Immediately it feels like you’ve been transferred back to the days of Star and King, but modern day Belly is a united unit, avoiding the line-up changes of the first album band and the tension that success brought to album two. It mixes perfectly the heavier sound of King with the dream-like qualities of Star. It’s a marker laid down and there’s much more to come.

Shiny One was the first single to be revealed, a triumphant euphoric announcement of their return and a starement of glorious intent as it whirls around with Tanya’s vocals coming at you from every conceivable angle, layered at points, duelling at others.

Human Child continues in similar vein, the chorus proclaiming “I’m not here to save you, I’m just trying to get you outside” sung half seriously half with a wicked glint in the eye in contrast to the verse where Tanya chides “let’s stop mourning, stop your sobbing.” The production is so crisp and clear that it allows the song’s emotion to shine through, particularly in Tanya’s voice, and it’s a common theme that runs through the album.

Faceless starts in a whirlwind of guitars and drums with Tanya poking through the epicentre. It’s a journey song, moving through sections where they vary both pace and style, but returning to the love / hate chorus “when I paint this day, I’m going to bathe you in light, I’m going to paint you on fire”, the layering of the vocals feeling like those flames enveloping the listener.

Suffer The Fools takes the pace down a little, but not at the cost of quality, the song reflects on the breakdown of a relationship into friendship - “I’ll still come by, I’ll bring that terrible wine that you love, I’ll bring the book I’ve been trying to get you to read” - before meandering wistfully to its conclusion, like someone lost in their own thoughts.

Girl is a positive song about female empowerment, the chorus "She brings it, she brings it, the day, the sun, the light, she brings it all and the time has come for her song to be sung and she sings it" is wrapped up in an equally uplifting tune, than then soars off in the middle eight, become coming back to the chorus.

It sets the tone for the second half of the album, which is a little more playful and has more pop moments than the first half. Army Of Clay declares "turn it up, turn it down, leave your stake in the kill. It calls you up, it calls you out, no escaping it kid when you feel the truth break over you" with more than a hint of mischief in the vocal. It also gives the album its title from a line "you send a dove and an army of clay."

The second single Stars Align makes use of a superhero reference, something not uncommon in Tanya's lyrics. It's got a great guitar solo to accompany the understated positive message of the words "I could tell you it's all gonna be alright, I could say we're going to be fine someday and it might not be a lie" complementing the upbeat nature of the music perfectly. The one thing Dove does consistently is leave you with a grin on your face, as you enjoy the record as much as the band clearly did coming back together to create it.

Things are slowed down a little for Quicksand. Belly are past masters at this, ensuring that their albums have always had a diversity of style and sound. There's a longing feel to the music, which Tanya translates into her vocals, as she searches "is there a rock high enough to climb over the tides that come?" Artifact is more upbeat with an almost country feel to the song and that in turn is evident in the positive vibe of the lyrics encouraging everyone to live their life to the full while they can - "Might as well go down with our dukes up either way the devil’s gonna find us."


The album finishes with Heartstrings, a simple slowed down track that states "heartstrings come rigged with hinges and springs, both horns and wings." It builds up a slow momentum that creates a slightly menacing feel despite its fragility. Similar is the bonus track Starryeyed that has been added to the end of the album without ever feeling like an after-thought or an unwanted appendage. as Tanya's angelic voice muses "starry-eyed we stole the night, and you raised the dead, we ran the tide, you raised hell then we slept."

The magical thing about Dove is the way it feels like everything fits together perfectly, that the recording process is the result of four people wanting to make beautiful music together. For all the excitement at the announcement a couple of years ago of the reformation, we never imagined that this would be the result - a combination of the best elements of their first two albums brought right up to date and delivered with a warmth and empathy and love that will melt the most cynical of hearts.