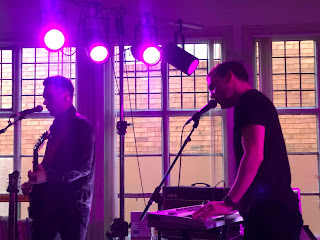 As part of The Charlatans' North By Northwich Festival, The Slow Readers Club headlined the town's library. In slightly surreal surroundings with bookcases moved out of the way to create a stage and a powerful sound system to accommodate a set that covered all three of their albums to date in front of a partisan hardcore of the band's fan base that had travelled from far and wide for this unique experience.

It's like a sauna in the library's reception area by the time the band take the stage. With sunlight beaming through the windows and a serious light set-up despite the modest size of the room, that only got hotter as the set progresses as a hundred or so Readers bounced around. There's a slight technical glitch at the start as Aaron's mic doesn't work and there's a bit of inter-band banter than Dave wins by telling them that "the drums always work." 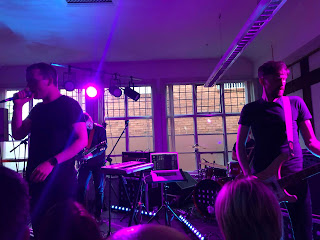 Tony Walsh, the poet, tweeted about this show that it was "a soon-to-be stadium headliner performance in a library" and that's exactly what this felt like. Even without many of the usual visual aids to performance that you'd get in a traditional venue, this feels that special, possibly the last time we'll see the aptly named The Slow Readers Club play to an audience this small. There's a real family feel to this, with kids down the front at the side, protected from the bouncing bodies just feet away that bellow out every single word to these songs. Like some sort of religious gathering you don't just like The Slow Readers Club, you love them and that's no more evident than when the band are almost drowned out by the riff on On The TV or the choruses to old school favourites like Block Out The Sun, Forever In Your Debt and I Saw A Ghost that have belatedly found convert after convert to the cause. The band are incredibly relaxed too, for once being able to see the whites of the eyes of those in front of them, but feeding off it and playing even better for that connection. 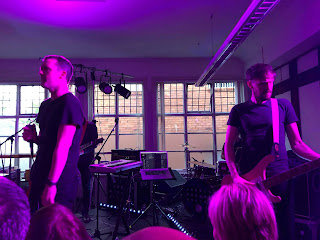 The new songs though are a band at the peak of their powers, but still looking upwards. Lunatic opens up proceedings and from then on they're on a roll. Supernatural feels even more emotionally powerful because you can see every expression on Aaron's face as he sings it, like the days when they played to audiences smaller than this in the tiny venues of Manchester's Northern Quarter.  Never Said I Was The Only One feels as heartfelt and aching as it's ever done with light streaming in through the window, almost obscuring our view of them without squinting whilst You Opened Up My Heart is glorious, euphoric and demonstrates exactly why The Slow Readers Club have done exactly that to so many of the people in front of them, from different backgrounds, ways of life and jobs. They've been brought together by the unifying passion of music and a band that makes genuine connections with their audience both through song and through their engaging personalities. Whilst they might not reach the stadiums that Tony alluded to, there's no sign of their rise slowing any time soon and this was a moment to treasure as we might not witness something so intimate again for a long while.

The Slow Readers Club played Lunatic, Supernatural, Start Again, Fool For Your Philosophy, Lives Never Known, You Opened Up My Heart, Never Said I Was The Only One, On The TV, Sirens, Feet On Fire, Block Out The Sun, Plant The Seed, Cavalcade, I Saw A Ghost and Forever In Your Debt.