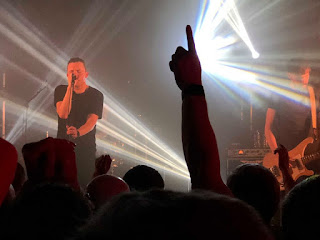 With the announcement that Build A Tower had entered the album charts at number eighteen, a phenomenal success for not just The Slow Readers Club, but their growing army of loyal followers and every band that is playing the local circuit of their hometown starved of the attention of radio and media that has belief in what they're doing. A party atmosphere ensued in a hot, sweaty and packed to the rafters Welly Club in Hull.  Support came from SKIES.

There's a lot of love in The Slow Readers Club's fan base for SKIES and it's not hard to tell why. Alie and Jericho are here to give you a good time, even if you're not expecting it. Their songs are hugely infectious, energetic and make you want to throw yourself around to them, even if your body says no. Guitars, drums and synths create a royal racket over which Alie sings about life and love - the magnificent set opener Afterwards, Green and Pills are songs about those subjects, wrapped in these force of nature beats and choruses that threaten to sweep you away like an unstoppable tsunami. 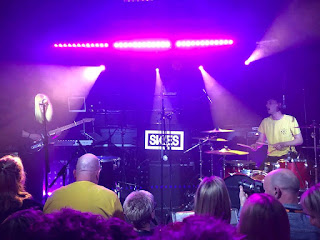 They cover 21 Pilots' Car Radio, smothering it in their own personalities and making it sound like their own creation, whilst early singles Hold On and Drone feel like they've developed live in keeping pace with SKIES' evolution as a band. It's almost impossible not to love them, as attested to by the response they get from the crowd at the end of their half hour set.

"Eighteen, eighteen" is the deafening if not very original chant that greets The Slow Readers Club as they come onto stage to the refrain of Donna Summer's I Feel Love. It's a fitting song as there is so much love in the room tonight, from the raised front section of the crowd to those squinting through the closed-off bar area at the back of a venue rammed to within an inch of its capacity. From the minute the opening bars of Lunatic kick in, those front rows are a heaving mass of arms, voices raised to the point the band are almost drowned out at points and most importantly a sense of community. There might be four people up there on stage, but this feels like a family celebration, the cumulation of a journey, but also the setting off point for the next one. For a band with virtually no national radio or media coverage to hit the album top twenty is an exceptional achievement - bands with major label support, a PR army behind them and in your face promotion have failed to do this in recent times, making what has happened here even more extraordinary.

The set is, as you'd expect, a celebration of Build A Tower. It's phenomenal that these songs already feel like they've lived with the hordes of people bellowing back every word despite only being out in the world for a week. Save for a rather odd heckler shouting "play something we know" after the events of the last ten days, who clearly irritates Aaron who responds with restrained grace even the second time, the likes of Supernatural, Lives Never Known, Not Afraid Of The Dark and Through The Shadows are greeted like old favourites, songs that mean anything and everything as the love flows from stage to pit and is sent back amplified like one of those old wave experiments you did in science at school. 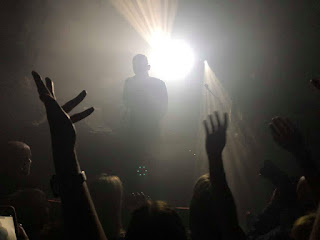 The old songs though still refuse to be cowed by the swaggering success of their younger brethren. Sirens is a monstrous towering anthem, far removed from its fledgling days on the debut album, as are Feet On Fire and a shimmering Block Out The Sun. The songs from Cavalcade - the title track, I Saw A Ghost, Plant The Seed, Start Again and Fool For Your Philosophy - probably wonder what they did wrong not to achieve what their siblings have, but cast aside any such rivalry and rise to the occasion. The band are on a roll, driven along by adrenaline and the sheer weight of the adoration being thrown their way and the eighty minute set could easily be extended by another twenty or thirty given the songs that aren't in this selection of songs.

Then there's On The TV, which Aaron tells us is about our impending demise. If it is going to be the anthem for the end of the world then in the small corner of the world where the population wear variants of word searches emblazoned like a badge of honour across their chests, then the final denouement will be a glorious one. That riff, a week old remember, is chanted over the intro, the chorus and into the second verse, which almost throws them as they're trying to play the song. They come back to it as they start the encore, a minute's instrumental refrain as the backing track to the audience who've taken it and made it their own as they wait for the band's return.

Then there's Distant Memory, the stage lit and then in darkness as the song builds like a lion ready to pounce on its prey, and then bursting into a sonic whirlwind over which Aaron fights for space. It shows that they're not just here to deliver huge singalong anthems, of which they have a plethora, but to explore the boundaries of their sound and break them down. It's stunning.

You Opened Up My Heart, for so long the song that everyone had at the heart of the Build A Tower campaign with that introductory riff and the "believe enough to lose control, where there's love, there's always hope" line that should be indoctrinated into children at an early age, has had its feathers ruffled by the rest of its pack, but in its place in the encore it's a perfect summation of exactly why The Slow Readers Club have opened up so many hearts.  Forever In Your Debt, replete with Jim's new funky bass line intro, brings things to a close before the front rows collapse with exhaustion or lose their voices.

The band then hang around to sign, talk and hug their fanbase, this emotional connection one of the reasons why there's such an unprecedented relationship between the band and their supporters. At one moment there's a young lad attending his first gig, pushed to the front by his Dad, who's welcomed into the fold, made to feel safe, who starts clapping politely then slowly losing himself in the music like those around him. It's a magical moment.

As the crowd move from chanting “eighteen” to reprising On The Tv’s riff again, it’s time to reflect the enormity of what these four men have achieved. Jim makes one of his legendary speeches and the man’s passion, steely belief and resolve is clear. He thanks the fans and makes special mention to Justin, the fifth member of the band who’s been at their side throughout this magical journey. And magic is exactly what this is - a triumph against the odds, against the machine and the increasingly disposal culture of our times

The Slow Readers Club played Lunatic, Supernatural, Sirens, Lives Never Known, Plant The Seed, Never Said I Was The Only One, Through The Shadows, Start Again, On The TV, Not Afraid Of The Dark, Feet On Fire, Block Out The Sun, Distant Memory, I Saw A Ghost, Fool For Your Philosophy, Cavalcade, You Opened Up My Heart and Forever In Your Debt.