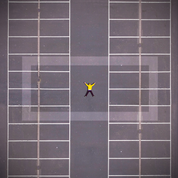 SKIES release their third EP X on Friday following recent support dates with The Slow Readers Club. For fans of the band already, the four tracks will both sound familiar but over the course of the EP they experiment with new variants on their uplifting sound and boundless energy.

The EP opens with Dusk and sees Alie dealing with a familiar subject - relationship issues - and that uncertainty in how to form them and get them right, declaring "we're all so damn guarded, I'm like a castle with a dragon and a drawbridge, I won't let you in, I haven't seen the sun in an age" - the song's title talking of time spend in an unlit place. The music is however very contradictory, a soaring glorious riff kicks it off before electronic trickery dances in the background of the verses and then help lifts the build into the choruses, creating a perfect juxtaposition between the dark of the lyrics and the light of the music. It's why SKIES have made such a positive connection with the fans of the likes of The Slow Readers Club they've supported, because it's a very similar balance albeit with a very different musical style.

Pills was previewed on their recent UK tour contains all the ingredients you'd expect from a SKIES song, a big extravagant chorus that explodes out of a verse that builds towards that moment, pummeling drums and electronics that will make you involuntarily start to tap your feet to it. It deals in the inability to tell someone what you think - "I can't get it out, though there's about a week's worth of words to say."

X contains the same lyrical themes, "I am full of blood and I'm trying not to spill it" and "I have a jet black heart and I don't know what I'm doing here", sung in a manner that expresses the vulnerability behind the words very clearly emphasising their impact on the listener. For a band whose live show can be explosive and full of energy, X shows a very different side to their game.

The final track Can't You Save Me clocks in at two minutes eleven seconds and is a little more restrained in its approach, although its almost gospel-like chorus vocals are SKIES pushing their envelope further and experimenting with different inputs into their chemical reaction. It's a song whose title says everything you need to know about the lyrical content - dealing with the problem many of us can relate to of "overthinking everything" and "let's pretend everything's alright."

X is the work of a band still developing their sound, channeling the furious energy of their live performances, bundling it into a powerful aural message that people will be both be able to relate to and let themselves go to. Like all the very best music, it makes a connection, is cathartic in the way it tells people that they're not the only ones feeling those dark feelings and everything will be alright if you face your demons head on.

The X EP is out on Friday.