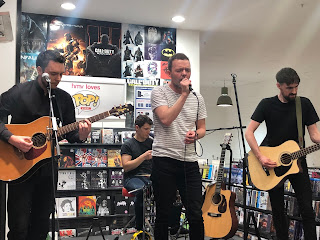 The Slow Readers Club continued their campaign in support of their Build A Tower album, announced earlier as being number twelve in the midweek charts, with a hastily-arranged full band acoustic performance in the HMV store in Manchester Arndale. In front of a crowd of all ages, they played five songs - a mix of three from Build A Tower and two from their previous album Cavalcade.

There's a family atmosphere amongst the assembled crowd, with children who couldn't ordinarily attend a Slow Readers Club gig stood at the front and their parents mixed amongst the diehard members of the READERS community who'd rearranged work and home commitments to get to the show. With David on drums, a novelty for a band acoustic performance as it was the first time we'd seen all four play together in this format, they deliver a set that strips down and rebuilds five of their best-loved songs before taking time to sign and pose for photos.

Immediately it's noticeable how good the sound is in HMV. You wouldn't expect this from an in-store in such an awkwardly constructed store, but they've worked hard to make these type of shows a good experience and the band have brought their producer Phil Bulleyment with them to help out to (on his birthday Aaron tells us, although we're spared having to serenade him with this fact). And, although they were still working out songs in the soundcheck, the way The Slow Readers Club are able to deconstruct these songs and reassemble them without losing the impact of the originals is testament to the inherent quality of their songwriting.

They start with Lunatic and the pummelling bass and drums of the original are replaced by something more subtle. When Kurtis joins in on backing vocals tonight you can hear him, unlike the recent set at 20 Stories where he was turned way down, and it adds extra lift and emphasis. By not belting out the songs as usual, the real depth of expression in Aaron's voice comes right to the fore. They follow it with I Saw A Ghost, a staple of their acoustic performances previously, but given new life by Dave's presence with a skeleton kit. 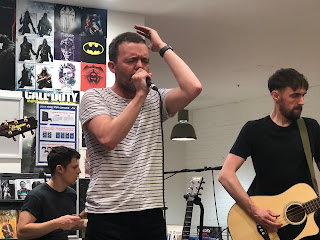 Aaron then has problems with his guitar, which they shrug off by simply unplugging the offending lead and playing without amplification. The song with the biggest transformation to this format is Supernatural, the first time we've heard this acoustically. As with the others, the translation of the song gives it a new lease of life and an intimacy which emphasises the words still further.

You Opened Up My Heart doesn't lose any of its anthemic qualities, particularly the "believe enough to lose control, where there's love there's always hope" line where a look around the room sees pretty much everyone mouthing along to what has almost become the band's motto since they first played it late last year.

They finish with Forever In Your Debt which starts with Jim's acoustic bass sounding like he's about to burst into a Queen song (a good thing in this instance). It's one of those songs that always hits the listener however you hear it and tonight's no exception.

Once they're done and dusted, they then take time out to sign anything and everything and pose for photos, which the staff at HMV handle brilliantly by not being fussy or restrictive which allows the kids in the crowd to get close to the band their parents have been playing them. The impending chart success clearly hasn't changed their outlook and diluted the importance they place on connection with their dedicated and growing fan base despite all the other pressures that success whilst still working day jobs inevitably brings with it.