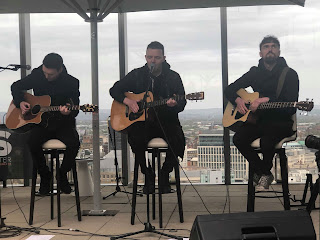 As Manchester's intent to build a skyscraper a hundred stories high hasn't yet come to fruition, 20 Stories, one of the newest and most talked about new bars and restaurants, seemed like a fitting place for local radio champions XS Manchester to invite The Slow Readers Club to play an intimate acoustic set with views overlooking the city to celebrate the impending release of their album Build A Tower.

With Manchester standing behind them through the glass walls of this open roof-top bar, it feels like a perfect setting for a band that only a few years ago would be playing the less salubrious haunts of the Northern Quarter, often to about the same number of people who'd won these competitions. Now local radio, and a growing amount of national stations, are all over them and City Life, who ignored the growing clamour around the band until it got so loud they couldn't when they were voted Breakthrough Act of 2017 by a landslide, are here to live stream the set to their readers (sic).

The bar's full of the Spinningfields' types that like the sound of their own voices and who have money to burn and those curious to see what the hype around the bar is (and the views across the city are every bit as stunning as everyone will tell you), but the team there do a great job of trying to ensure the area nearest to where the band perform is as sheltered from the bar chatter as they can and that those who ordinarily wouldn't go near such places are treated as if they were regulars - something that can't be said for all bars with such lofty ambitions in this area.

It needs to be hushed though as the set-up the band have to play with is way too quiet. At points Aaron's having to hold back with his voice otherwise he'd drown everything else out, whilst Kurt's backing vocals, key to the harmonies on some of the songs they play are only just about audible. It all makes for a challenging situation, but one that the band take head on and still delight the gathered competition winners and station staff and invited guests. 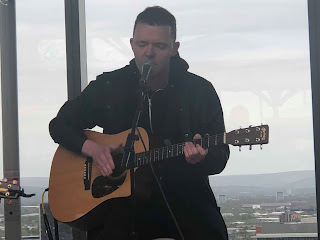 The seven-song set is like a mini-Greatest hits set in stripped down form. There's the three singles or focus tracks released from Build A Tower to date. Lunatic and You Opened Up My Heart might be high-octane foot-stompers on record and at traditional live shows, but stripped down here, they unpeel layers of the songs to reveal the powerful core at the centre of them. You Opened Up My Heart, in particular, as they sing the "believe enough to lose control, where there's love there's always hope" acapella, is beautifully simple in its execution, confirming that the reason the Slow Readers Club have made such a connection is, for all the stomping tunes they possess, the ability to connect at the deepest, most personal level with their songs. The intimate surroundings don't stop Jim's feet twitching though as he stomps on the stool that he's sat down on.

They open with Cavalcade, the title track of their previous album, and follow it with Block Out The Sun. Aaron jokes that "it's an old one so we know how to play it acoustically", before adding "and it's quite good too." It's a modest statement, but the song then underlines that whilst Lunatic and You Opened Up My Heart have brought them to new, bigger audiences, everything that's won over new admirers have always been there, just hidden from sight of so many. Before starting I Saw A Ghost, Aaron turns round to survey the view of the city behind him and tells us that the first time they played it acoustically was at Central Library, then turns to Jim and says that he wasn't there for that, but that it's better now. They finish with another foot-stomping Forever In Your Debt, a slightly funky sound to it, as Aaron taps the body of the guitar and Jim continues to improvise a drum beat on the bar of his stool.

And so concludes an interesting performance. The lack of amplification made it a very strange one, but the band have fought much greater adversity than that on their path so far. The beauty of the songs shines through in the way they're adapted to suit this environment without losing their emotional connection and you hear every little bit of Aaron's voice in moments like this. It'll certainly be a very different atmosphere in the Cathedral tonight.

Build A Tower is out on now on CD, cassette, cherry red vinyl and a limited edition marigold and black vinyl exclusive to their website. On the same day they also release a CD and vinyl version of their six song set recorded with Joe Duddell and a classical ensemble at Festival No 6 last September.