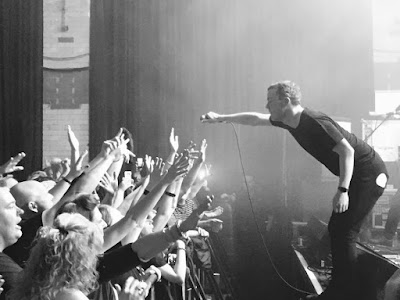 The Slow Readers Club bandwagon rolled into Newcastle on Thursday night on their Build A Tower tour. A triumphant show saw them win over an initially cautious audience by the sheer power of their performance and discover their festival-slaying, radio-conquering moment in the process. Support came from Southampton's Wild Front.

It's a long way from Southampton to Newcastle, so we're surprised (and delighted) that Wild Front were chosen to step in for the absence of Bang Bang Romeo through illness. Apparently it's the fifth time they've been in Newcastle since they supported James at Time Square last summer and they get a great response from the Newcastle crowd to tracks like Kill Me, Rico and Physics. Their songs are well-constructed and delivered with a heartfelt emotion and passion that makes it difficult for even the coldest of hearts not to warm to them. Their forthcoming single Simmer Down is the undoubted highlight though. Bearing all the trademarks of what's gone before, but on steroids, it's a song that reaches out and draws you in involuntarily, Jack's voice soaring as the chorus kicks in. If that's the direction their new material is heading, that and live performances like this will have us seeing a lot more of them in the future. 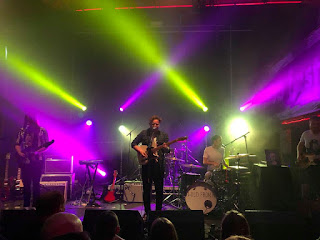 By the time The Slow Readers Club come on stage, the venue has filled up considerably. Last time they were in town they sold out Think Tank. Tonight there's probably double the size of crowd and, although it's not a sell out, it's testament to the fact that the word of mouth is growing about them across the country, about to hit the album charts without a day time radio playlisting. None of this detracts from the red-hot atmosphere that's been built up by a selection of eighties electro-anthems that explodes gloriously the minute the band kick into Lunatic.

Although they must be shattered with all the album release week activity, working day jobs still and the gruelling travelling, for ninety minutes you wouldn't know any of this. There's an energy from those very first bars that pulls in the audience and doesn't let them out of their grip until they're done at the end of Forever In Your Debt. Unlike so many bands playing a lot of new material, the songs from Build A Tower already feel like old favourites, everyone around us seems to know every word to every single one of them, providing Aaron with a backing chorus throughout. It feels like the audience are feeding off the band and then the band suck that back in and grow bigger and bolder as the set progresses.

They laugh off some technical problems at the start of Never Said I Was The Only One, and almost magically the problem seems to disappear like any doubts whether the band could make this step up. The Riverside's clear crisp sound and a genuinely stunning light show add even more power and impact to the anthem after anthem that the band have in their canon now, whether it be the pumping pulsating Lives Never Known and Plant The Seed or the more controlled directed yet no less impactful emotionally charged Through The Shadows. Start Again "has arm movements" says Aaron introducing the song as several hundred people mimic the ticking clock actions of the chorus. 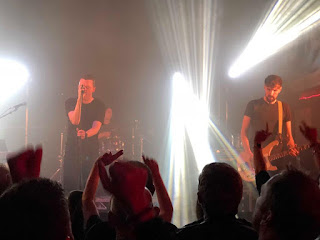 Then the moment that might redefine the next phase of their rise happens. On The TV from the new album is clearly a single in waiting from the moment its banging electronic beat kicks in, but as the song reaches its conclusion, the audience take it on and chant it back to them forcing the band to come back in and improvise the ending of the song again. The encore break later sees them reprise the chant as they wait for the band to come back. Perhaps this will be the one that sees them on daytime playlists, but it felt like one of those moments at a gig that you get very few times when something spontaneous and brilliant happens.

The band are clearly blown away and the atmosphere has changed tone of complete celebration now, older songs like Feet On Fire and Block Out The Sun feel like they're fighting to the death to retain their place in the setlist around the new pretenders to their throne of crowd favourites, whilst Distant Memory sees them lose us in a cacophony of Jim, Kurt and David's making whilst Aaron fights his way through the middle of it. I Saw A Ghost completes the main set and sees everyone in the room arms aloft hollering back at them like some form of communal exorcism.

The crowd are baying for more and Aaron tries to temper the atmosphere by saying they're going to play a slower one, and Cavalcade might be that, but it doesn't in any way dampen the enthusiasm of an audience that's got the adrenaline surging through them. You Opened Up My Heart feels more powerful every time they play it, a magnificent soaring anthem with a design for life in the breakdown - "believe enough to lose control, where there's love there's always hope" feels like an anthem for the times, before they finish with Forever In Your Debt, a song that if released now in these more receptive times for the band could have been the one. But there's about ten songs that fit that bill.

The Slow Readers Club played Lunatic, Supernatural, Sirens, Lives Never Known, Plant The Seed, Never Said I Was The Only One, Through The Shadows, Start Again, On The TV, Not Afraid Of The Dark, Feet On Fire, Block Out The Sun, Distant Memory, I Saw A Ghost, Cavalcade, You Opened Up My Heart and Forever In Your Debt.