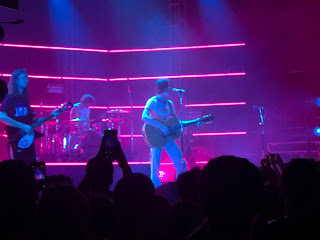 Blossoms are back on the road celebrating the chart success of their second album Cool Like Out. A sold-out Bank Holiday Monday crowd braved the sauna-like conditions within the O2 Academy to witness a mix of tracks from the new album and their number one self-titled debut in an atmosphere that never dipped below fever pitch for the hour and a quarter they were on stage.

They start with recent single There's A Reason Why (I Never Returned Your Calls), perhaps a surprising choice but one that immediately had the crowd bouncing. Like the best of Blossoms' songs it walks a line between pop and rock, gloriously optimistic musically, an unmistakable riff running through it, and lyrically talking to the young kids who are hanging on every word Tom sings at them tonight. Round the edges of the venue the older ones amongst us nod sagely at how Blossoms have managed to deliver something with so many reference points, but it is unequivocally something of their own which touches a nerve with so many people.

That party atmosphere continues throughout the set, which is almost non-stop until the encore break as they segue one song into the next, starting with Unfaithful into Cool Like You's lead single I Can't Stand It. It's clear that the new songs have found their way into the hearts and minds of Blossoms' fan base already, such is the response and the volume of singing along. Live, the songs have a naturally harder edge to them than the record, less synths, more guitars and bass and Myles and Charlie's backing vocals help to lift the songs too. This is more noticeable later in the set with I Just Imagined You and the slower Between The Eyes as well as Texia from the debut album, which is shorn of the big electronic intro that it had when the first record was being toured.

They don't say a great deal other than Tom's usual requests to cheer each of the other members of the band at some point in the set, but then their songs do their talking for them. Blow and Cut Me And I'll Bleed still have those rougher edges that characterised their earlier singles, whilst Blown Rose and Getaway are just simple, beautifully and evocatively executed songs dripping in romanticism that goes back and recalls many of the great bands of the sixties, but with a thoroughly modern edge to them. It's why they've managed to attract and retain audiences with a more diverse age range than many of their contemporaries. Love Talk, Cool Like You's closing adieu, is similar in vein, a rich expression of the trials and tribulations and complexities of young love couched in a song that you'll find impossible to shift from its leech-like position in your subconscious. Lying Again and the boundless synth bundle of joy that is I Just Imagined You are dispensed with similar intent and results. 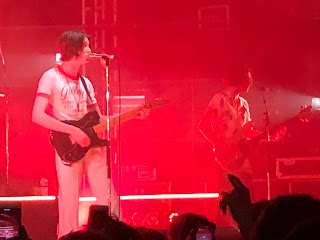 Blossoms' show is unpretentious, there's no huge stage set, other than bands of lights that perfectly match the crystal clear sound they achieve in a venue not always known for such pleasures. Save for a few Josh Dewhurst solos, which shine because they show how good a guitarist he is without showing off, they allow the songs themselves to do their bidding for them. My Favourite Room sees the rest of the band depart and Tom deliver the song acoustic, with the help of fifteen hundred or so backing vocalists before leaving us with snippets of You're Gorgeous and Half The World Away.

The encore is all first album. At Most A Kiss is pumped up at the start, as if on steroids, Getaway, as previously mentioned, is so emotionally intense because it doesn't try to be anything other than a perfect pop song and Charlemagne is the inevitable conclusion. As the hordes go mental for one last time, it's impossible to dispute its importance to the band and their fans, but on reflection of the seventeen songs that have preceded it, Blossoms have moved on. Their detractors might have raised their voices, but they've missed the point completely. This isn't a band trying to be cool indie kids, they've broadened their horizons to aim for something timeless and effortless and their star seems to show no sign of receding any time soon judging by the reaction of the Leeds crowd.

Blossoms played There's A Reason Why (I Never Returned Your Calls), Unfaithful, I Can't Stand It, Blow, Honey Sweet, Cool Like You, I Just Imagined You, Blown Rose, Cut Me And I'll Bleed, Texia, Between The Eyes, How Long Will This Last?, Lying Again, Love Talk, My Favourite Room, At Most A Kiss, Getaway and Charlemagne.