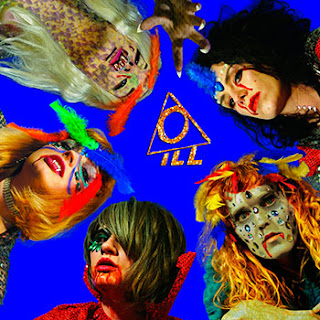 ILL’s debut album has been a long time coming. The volatile boundary-challenging band have made their name in Manchester and beyond with their voracious mix of styles and approaches to their art and a series of often chaotic on the brink of breakdown live shows. We Are Ill somehow manages to distil this melting pot into an album that demands your full attention, often baffling, spliced with moments of off-the-wall genius that you’d blink and miss as the next curveball smacks in you right between the eyes.

It's an album that you have to immerse yourself in, failure to fasten your seatbelt for the ride won’t work as you’ll get thrown off by the time they reach the first chorus of the opening track Ill Song. Half the time it feels like they’re singing the first thing that comes into their head, but there’s a brilliant method to their madness, the way Whitney and Harri’s vocals are one moment a perfect call and response, the next sounding like they’re singing completely different songs, declaring “no one needs you when you’re ill, no one calls you when you’re well, take your pills” on the aforementioned Ill Song, whilst exploring the concept of sexual harassment in aeronautics in Space Dick with lines about self-fellation on the Mia space station amongst a series of one-liners you’d have to listen to the song a hundred times to fully get them all.

Musically it’s impossible not to be drawn in by ILL if this isn’t all too much for you. They’ve got some many ideas going on in these songs, often at the same time, yet still it rarely feels incoherent or lacking in focus. Stuck In A Loop has a playful riff running through it that you’ll struggle to shift from your head, especially as the song finishes with them singing “round and round and round” on repeat. Bears feels like some sort of respite, its six-minutes are more restrained than elsewhere on the album, until you realise the punchline is that they’re going to feed you to their bears if you give them the opportunity. Bus Shelter is the story of living on the streets, invisible to the passers by, but wondering where they’re going to, listing a whole range of Manchester suburbs, before moving their target to ineffective and uncaring politicians and the racist renaissance and ending with them declaring over and over and over each other that the world is coming to an end. It’s one of the more obtuse and oblique pieces of social and political commentary we’ve heard, but against the odds it’s also one of the most observant and hard-hitting.

I Am The Meat has their tongues tucked back into their cheeks but with a poisoned dart ready to spit out into the eyeballs of their antagonist. “Skinny-bodied fucker, I am the meat, give me all your gravy, I am the meat, this is just for starters, I am the meat” takes aim, we think, at the zero size culture that society champions. Without what you’d call a tune, rather an imposing, dark series of beats sets the tone. Slithering Lizards, all ten minutes of it, is next, and it’d be dismissive to call it a song, it’s almost a concept album in its own right, a journey through a disparate set of ideas, starting off menacingly declaring “hey sisters they’re coming for you, you better lock your doors…. You’re not safe anymore, they’re coming for you” until three minutes in when it transforms into a rampant scurrying high-speed ride for four minutes before again shedding another skin and heading off to its franatic conclusion.

Power is dark, claustrophobic and menacing grooves, the sort that have you on tenterhooks expecting an onslaught but unsure as to where it’s going to come at you from, declaring “what am I supposed to do, with all this power” whilst the album’s closer, and revisiting of early single, Hysteria, is much more buoyant and upbeat in its outward view, yet still has that unsettling edge to it, as they muse the pressure on young women to conform to societal expectations and subjugate their own ambition rather than live their own lives “why don’t you get married, play at happy families?, you’re just a birthing machine.”

We Are Ill is a genuine triumph; it somehow takes the energy of their live shows, extracts but doesn’t dissipate or dilute it yet still retains the taut tension, the thrill of the moment and the uncertainty of exactly what they’re going to do next. It’s not a record for a casual listen or inclusion on one of your playlists and you’ll be going back and discovering new things about it for years such is the depth and diversity of the songs. You might not understand exactly what they’re telling you at times, or misunderstand completely, but We Are Ill will keep you transfixed and on the edge of your seat if you’re brave enough to dive in.

Their Manchester album launch is on June 16 at Deaf Institute.  They also play Manchester Soup Kitchen (May 21), Leicester Soundhouse (31) and Newcastle Head Of Steam (June 1).

Email ThisBlogThis!Share to TwitterShare to FacebookShare to Pinterest
Labels: ILL