The Slow Readers Club - Live At Festival No.6 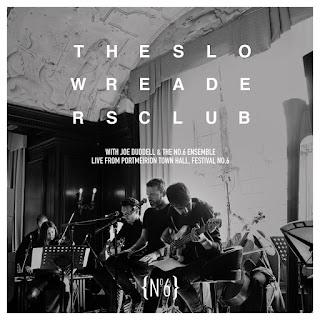 To accompany their third album Build A Tower, The Slow Readers Club are also releasing their performance with the Festival No.6 classical ensemble at last year's festival consisting of six songs chosen from their first two albums and arranged by Joe Duddell. With some rarely played tracks making an appearance and some old favourites given a radical makeover, it's a stunning companion piece to the album itself.

The selection of songs, like Joe's collaborations with James and Elbow, came from the celebrated composer so the tracklisting of the album swerves some of the best known Slow Readers songs in favour of some that don't often make their way into the set, including debut album tracks Follow Me Down and Frozen and, in the case of Secrets off Cavalcade, had never been played at all.

The show in the intimate Town Hall saw Aaron, Kurtis and Jim perform a seated set with the ensemble that features violin, viola, cello, harp, bass clarinet, horn and vibraphone in front of an audience that queued for hours to get into these one-off performances that have become a highlight of the festival across in the picturesque setting of Portmeirion.

The arrangements across the six songs, aided by the band's producer Phil Bulleyment's telepathic understanding of what makes the band tick in the mix, transform them from the big anthemic stomps that have made The Slow Readers Club a band on the brink of a major breakthrough into something much more dramatic, drenched in strings that create a palpable tension throughout against which Aaron pits his voice, crystal clear to emphasize every word he sings.

Starting with Cavalcade, a very understated intro, stripped back from the recorded and live versions, dances in the background as Aaron takes centre stage in the first verse whilst in the second the strings wrap themselves around the expressive nature of Aaron's voice that could otherwise get lost against a wall of noise that they create live. Block Out The Sun is a prime example of this, a song that is one of their most rabble rousing crowd favourites is distilled into something reverberating in pathos and a tender fragility that is communicated in both the intricate detail the ensemble bring to it and the depth of emotion that you can hear in every note Aaron sings.

Frozen opens with a stop-start section that continues through the first verse, moments of razor sharp instrumentation melting into gorgeous longing strings and then back again, as the song slowly builds to the chorus and then throughout the rest of the song. It feels like it's been reinvented, reinvigorated, but without losing the intensity of the original. Follow Me Down, a crowd favourite that was shuffled off stage as Cavalcade came out and its songs replaced it in the set, has the guitars and keyboards replaced by the ensemble and they make the hairs stand up on the back of the neck. For the first few seconds of the first listen, you can't tell what song they're about to play until Aaron starts to sing. Of all the songs on this record, it's the one that really shows off how strong his voice has become, whether it's the insistent way he sings "the silence must be broken, don't want to end up like your old man in silence with words left unspoken" or where he demonstrates just how he can change the tone to meet the song's needs.

Secrets is probably the song of the six that's closest to its recorded version, delicate in the build, accentuated here by the vibraphone in the verse until the strings come in and lift the song further. It's a beautifully simple song, but the attention to detail, how every note feels that it's there for a purpose is testament to how these sort of collaborations can produce stunning results that give the listener a new insight into a song and which are testament to the fundamental quality of the song itself.  Know The Day Will Come concludes the set, as it did most shows of the Cavalcade era, and again the song both remains true to its original concept, but is wearing a completely new skin, strings replacing the pulsating bass, subtlety replacing the sheer power of the live version of the song, yet it still builds to a glorious conclusion as Aaron's harmonies are lifted up on a wave of strings.

What was a one-off performance, in keeping with the spirit of Festival No.6 has become an affirmation of the basic songwriting capability of The Slow Readers Club, the sign of great songwriters is the ability for the songs to be taken and reinvented without losing any of the intent of the song or the impact it has on the listener. With Joe Duddell in charge of arrangements, he manages to both remain true to the original, but also delve under the skin and create something that makes the listener reevaluate and love these versions as much as the original. Alongside their Live At The Library release, it's an essential companion to the three studio albums.

Read our first review of Build A Tower here.