You Want Fox - Reverse The Curse 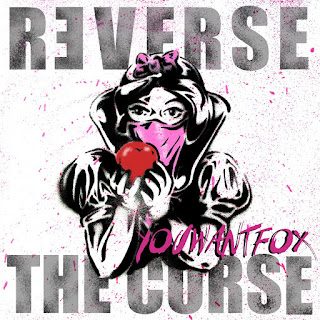 Reverse The Curse is the second album from Nottingham's You Want Fox. Filled with tales of love, deception and the subsequent emotions, it's a triumph of the band's independent spirit and their ability to fashion songs from bass and drums that both pack a punch and tender the wounds.

You Want Fox are Natalie on bass and vocals and Colette on drums and vocals. Formed back in 2015, the Nottingham-based duo released their debut album You Can't Sit With Us in 2016 and then followed it with a single Liar Liar last year as they wrote and recorded this self-released album.

Reverse The Curse clocks in at just thirty-two minutes for the eleven songs that make it up. That says volumes about You Want Fox's approach - they're here to give you a short sharp wake-up shock. The modest means that any duo have at their disposal shapes the record too, but these songs are all the better for not having had the kitchen sink thrown at them. Most of the album - starting with opening track Tooth For A Tooth operate at a hundred miles an hour and throw darts at the subject matter - "I'm seething at the thought of you, a simple solution is use my passion of hate and launch it right at you."

This is successful throughout as they don't just take a formula and repeat it though. They vary pace cleverly and to great effect. Flying Solo is a highlight, jumping around all over the place, but never losing focus, one minute all gorgeous harmonies, the next a thunderous rumble of drums. Last year's single Liar Liar has a brilliantly tongue-in-cheek riff running through it and the "liar liar" call is delivered with butter melting in the mouth with darts being thrown at the song's protagonist.

Dirty Little Damsel has a filthy guitar opening that contrasts with the sugar-sweet vocals that hide the darkness in the lyrics - "these chains tighten around me so I can hardly breathe, you hold me down, but I don't want to leave cos I'm going under"- which give this, and much of the rest of the album an unsettling feel that keeps the listener's attention. The battle between dark and light continues on Fright Night, our favourite on the album, where "the monsters are hiding, they're underneath my bed, the demons are lurking, they're deep inside my head" is sung as if they're reciting a nursery rhyme rather than deconstructing some dark thoughts.

Black Heart couches the heartache of a relationship dissipating and the emotional turmoil that comes with it in similar wrapping, whilst Round And Round kicks in with a knockout punch in the verses which contrasts with the chorus where Natalie and Colette's voices come together, something that also runs through the album giving these songs greater impact. Begin The Beginnings has a cutting riff running through its core, a harder edge to the vocals although they're actually delivering an encouraging rather than an angry message - "I'll walk across the line, take my hand you will be fine" - this chicanery of the music / lyric contrasts again being completely successful.

Vixen is a more straight-forward rock song but no less impactful, a tale of a woman ensnaring a man - "she was there in wait, vixen in red nails, you took the bait" - as is Changes, the most recent single and album closer. The song propels itself under its own momentum, harmonies in the back of the mix lifting it up through the numerous sections in the two minutes it exists in the world.

Reverse The Curse is a real triumph of the independent spirit of You Want Fox. They take no shit if you mess with them, but they're equally willing to put a consoling arm round you should it be required. The songs are cleverly structured to make maximum use of the drums and bass that they have at their disposal and the fact that both of them are capable of playing lead or backing vocals across the album.

Reverse The Curse is available from their online shop.

Email ThisBlogThis!Share to TwitterShare to FacebookShare to Pinterest
Labels: You Want Fox