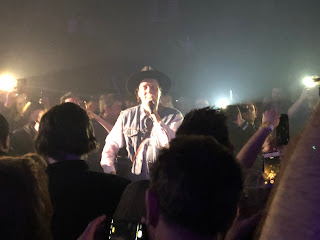 Arcade Fire brought their Infinite Content tour back to Manchester for an "in the round" performance in the cavernous Manchester Arena. Mixing songs from last year's Everything Now with highlights going all the way back to their debut self-titled EP, they thrilled the crowd with an interactive set, full of the invention and anthemic power that has made them one of the biggest bands in the world.

The stage is at first set up like a boxing ring and as the screens above the stage spring into life, they're filled by boxing references about Arcade Fire's achievements as they enter the arena and make their way through the crowd high-fiving those lucky to be close enough to them as the familiar strains of the instrumental intro to Everything Now fill the arena.

The single that launched the album of the same name would in a bout seal victory in the first round. Easily their most immediate and accessible track to date, although the other set bookmark Wake Up might argue its own case, it sets their stall out on a set that touches most of the crowd-pleasing favourites you'd expect. For a band with so many facets to what they do, so many talented multi-instrumentalists and a desire to mix things up to keep themselves entertained as well as their audience, it's perhaps a surprise they've got to the size they have. But as the glorious hedonistic chorus kicks in and fifteen thousand hands are raised in unison, it all becomes clear. They go back to their debut album to seal the deal two songs in as Rebellion (Lies)'s call and response has the audience exactly where they want them. 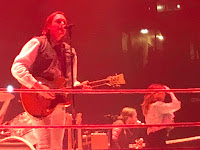 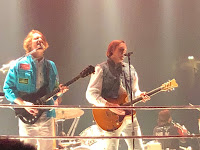 They intersperse older songs with the new cleverly throughout, the shimmering glory of the Regine-led Electric Blue and Put Your Money On Me feel particularly potent alongside their Neon Bible highlight No Cars Go and Suburban War. Whilst debut EP track Vampire/Forest Fire might have a few scratching their heads as to its origin, it simply confirms the depth of quality in the band's back catalogue and their desire to not simply turn up and play the same set every night.

They've also learnt the art of playing these size of arenas. It's difficult to come here and make the place feel intimate, but first Regine and then Win both spend time out amongst us, trusting their audience not to spoil things by acting the idiot and respecting them reaching out to make the connection. Win ends up in the seats at one point after starting the encore of We Don't Deserve Love out with us under one of the enormous glitter balls that are used to great effect throughout on the disco-tinged numbers from The Suburbs album in particular that make up a large part of the set's middle section. 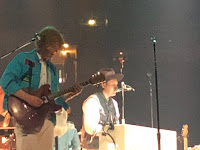 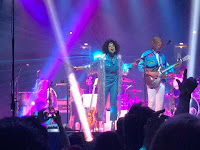 The band move around the stage throughout the set so that everyone gets in the eye line of each band member regularly. Whilst Win and Regine obviously get the biggest focus of attention, that's not to downplay the visual and musical input of the other five key members - Richard, Sarah, Will, Tim and Jeremy - which ensure that if you as much as blink you miss something. Whilst the connection with the audience is key to the night, the intuitive nature of the communication between them is absolutely critical to this not falling flat on its face. There's so much going on when they play the likes of Creature Comfort and the main set finish of Neighborhood #3 (Power Out) that this is a genuine collective rather than a mere band. 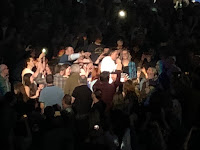 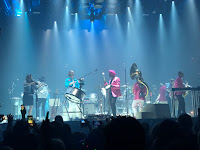 That sense is given even more gravitas by the appearance of the support band Preservation Hall Jazz Band for the last two songs of the evening. As on the album, they revisit Everything Now, but in much more restrained form, before a wild and chaotic Wake Up that continues as the band leave the stage until they reach the sanctum of the dressing room, the crowd singing it as they dissipate out into the cold and wet Manchester night.

"We might not be back for a while" Win tells us with a hint of sadness in his voice. Having been party to the derby the day before (something he says he won't comment on) and DJ'ed at the Deaf Institute, they have a clear affection for Manchester, particularly as this is the second gig here on this round of shows after last year's Castlefield show. That love flows fluidly from stage to crowd, up the massed banks of seats, and back to the stage. On this sort of form Arcade Fire are one of the most vital live bands around, able to make this size venue feel like a club show in a way that most bands simply don't have the know-how or personality to achieve.