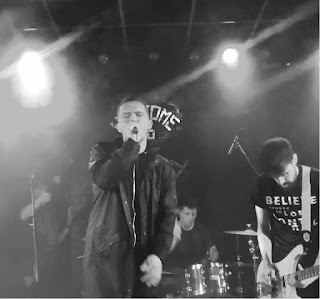 Ahead of the release of Build A Tower on Friday, The Slow Readers Club kicked off a UK tour this week, including a sold-out date in the main room of Leeds' famous Brudenell Social Club. Jason Wynne braved the trains across the Pennines to report back on a set that included nine of the album's ten songs, heard by many for the first time.

Tonight is the third night of The Slow Readers Club's latest tour to celebrate the imminent release of their new album - Build A Tower. On the outskirts of Leeds at Brudenell Social Club there's an air of anticipation with the realisation that there are going to be a lot of new Readers songs getting played tonight that nobody has yet heard. The meteoric rise that will surely accompany the band once the album gets released means the "sold out" signs are on the door. This is the hottest ticket in town tonight.

The atmosphere is electric and there's so much love in the room between the band and audience that you could be forgiven for thinking that you're back in the late 80s/early 90s waiting for Messrs Brown, Squire, Mounfield and Wren to take to the stage.

The band walk on to rapturous applause and they don't mess about as they kick straight into Lunatic. There's no holding back and the first song and single off the new album gets Brudenell Social Club rocking as a mass of bodies bounce off each other in all directions. The crowd take over the song "Build a tower, Hundred storeys high" and you can sense already it's going to be one of those special nights. "Once again I'm drawn toward oblivion, The end already written though we've just begun". A perfect start.

Next up is the funky Supernatural getting it's first airing to those that didn't make it to the Cardiff and Southampton gigs. Not surprisingly the catchy bass and dance influence are a firm favourite with the crowd. "So I pour my heart out" sings Aaron and that's exactly what he's doing on this fantastic new song.

After digesting the new tune the fans have no time to ponder or reflect on it as the unmistakable intro to debut single Sirens ensures a mini riot down the front. "Tear out my eyes, take away the madness. All I can see is misery and sadness" exclaims Aaron although he's probably seeing a lot of happy people before his very eyes hanging on his every word. 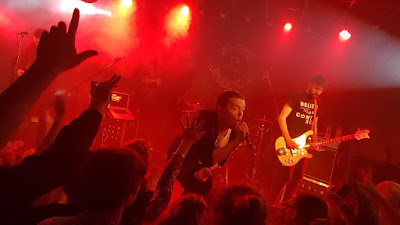 Next up we're treated to another newbie and sure to be live favourite, in Lives Never Known. It's got the lot, Synths, heavy guitar, powerhouse drumming and great lyrics - "Now you've chosen a path, all those lives never known"...it's angsty and dark but uplifting too.

The READERS chants are in full cry now as a sign of approval for the new songs that have been played so far yet the band then decide to revert back to old and play crowd favourite Plant The Seed just to remind us all of their ever impressive back catalogue. Not that we need reminding of course.

After a frenetic start the band slow it down a touch firstly with Never Said I Was The Only One and then Through The Shadows. Two killer songs from the new album that the band have been playing quite a bit over the last six months. On Never Said I Was The Only One Aaron plays keys and beautifully delivers with that fantastic voice of his. The crowd sing the chorus in unison and it takes your breath away hearing hundreds of people surrounding you singing back every word - "I can hear the choir singing" says Aaron with a wry smile before quipping that we have to be serious for the next song - Through The Shadows. The haunting intro "Sorrow, fills up your heart" gets the hairs on the back of peoples necks raised in an instant. This nice little slow passage of music gives us all time to catch our breath before we have to start again with arms around each other jumping as one in celebration of Manchester's best band right now.

Start Again is precisely the song that lifts us from our reflective state of mind. It's almost like a sing-off between crowd and Aaron as they battle to sing the loudest and the best. It's no contest though as the stomper wins it hands down backed up by his band of brothers. "Time will come to take its toll" is deafening and you'd probably be able to hear it right down the road in the city centre such is the energy between band and crowd.

Before anyone can catch their breath a new song is unleashed on us - and what a song! On The TV is the best song I think I've heard from them. A Foals-like intro and that piercing pitch-perfect Starkie vocal. Despite only hearing this song for the first time last night the crowd grasp the chorus in no time and sing back to Aaron "On the TV, the world is on fire, we've all gone insane"

Not resting on their laurels they play another new one - Not Afraid Of The Dark. There's no denying that The Slow Readers Club have picked up a great knack of creating earworms and this is another.
Feet On Fire is next up. A firm favourite off the first album and surely never to be replaced in their setlist although they'll be having problems soon picking which songs they may have to drop to accommodate the new album and future albums. For now Feet On Fire explodes into life and it's the turn of the audience to stomp their way through the next four or so minutes.

It's at times like this that you realise how many tunes this band have. Block Out The Sun is delivered beautifully. As I survey the room I can see people with arms raised, singing every word with just the same passion as Aaron. The rest of the band look on in awe and it's yet another spine-tingling moment to witness.

Could this get any better? Yes. Distant Memory is yet another new song that has the adoring faithful hanging on every word. It seems to be a reflective song which, after it's slow opening telling us to "Write a new story", ascends with the repetitive "Distant memory...distant memory" getting into your head before descending into chaos as the bass, drums and guitar spiral out of control making a quite beautiful racket.

I Saw A Ghost closes the main set and it sees the congregation let loose as it's mayhem down the front with Aaron almost ending up in the crowd as over-exuberance reaches its peak on the night. Every single person in the room singing along to every word and living for the moment like it's their last night on earth. 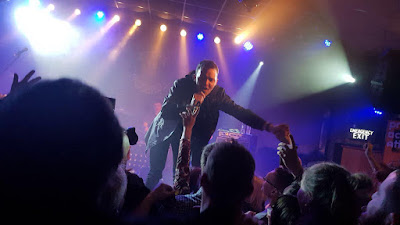 As the band depart it's time for us the fans to give something back and it comes in the form of an incessant READERS chant not too dissimilar to the Viking war chant of the Iceland fans in Euro 2016. The chant is still going strong when the band return for their three song encore. Aaron asks if there are any new fans and the response suggests that there are. A great sign of their ever increasing popularity.

The raucous crowd are treated to Cavalcade - the title track from their now not last album - and it delivers on all fronts like any live favourite should. The thunderous drumming, dancey bassline and killer guitar hooks that have accompanied the whole gig continue and there's a sense that the band know they really have nailed this show.

The opening to You Opened Up My Heart causes the biggest cheer of the night. This is the song that has catapulted them into a bigger time but how far we will only know once the album hits the shelves on May 4th. "Believe enough to lose control, where there's love there's always hope" cries Aaron and you believe him when he sings it.  "In my mind I'm seventeen" exactly what we were all thinking when we were riding this wave of emotion last night and not wanting it to end.

Fittingly they end with Forever in Your Debt. Aaron claims "you are my inspiration, future and my past". It's a two way thing as band and crowd feel the same way about each other. Fans and band have come on a long journey throughout the years and the music has brought fans from all walks of life together in unison as a family and it's great to see.

The band end the night by chatting to everyone and posing for photographs - just another little extra to let people know they couldn't have got to where they are without the support of people although it did get me thinking - how long before they move up to the next level? This tour has started with so much positivity and I really do hope they can kick on now and get even more success. They deserve it.

Build A Tower is out on Friday on CD, cassette, cherry red vinyl and a limited edition marigold and black vinyl exclusive to their website. On the same day they also release a CD and vinyl version of their six song set recorded with Joe Duddell and a classical ensemble at Festival No 6 last September.