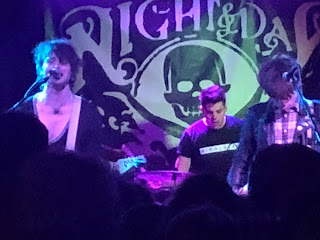 One of the nation's most unpredictable and underappreciated bands Trampolene returned to the Night And Day for the Manchester leg of their tour. A hot and sweaty crowd were treated to a mix of tracks from their debut album Swansea To Hornsey, a couple of covers and some impromptu old favourites.

Last time Trampolene were in town, they were down the road at the Arena, something Jack alludes to when describing how much Liam Gallagher, who they supported just before Christmas, loved his big fake fur coat. It's so hot that it's dispensed with after a couple of songs as is much of Jack's shirt. which "cost two quid from a charity shop, Tommy Hilfinger, that's how much I care about fashion", as we progress through the show.

They come on stage to one of Jack's poems Artwork Of Youth, which recalls the defining events and people in Jack's growing up, with the punchline that "I was the first to get out." Escapism is a common theme in a lot of what Trampolene do, getting away from the day to day drudgery with another poem Ketamine, which is shouted back at Jack almost as loud as he's telling it us, and Alcohol Kiss, where getting drunk and getting off with someone is a means of shutting things out. As the latter stops, and everyone thinks it's done, Jack waits and then starts an acoustic part that builds again.

They are beset with technical problems. Wayne snaps a bass string before they've even got the first chorus of opening track It's Not Rock N Roll. Thinking quickly Jack starts up an unplanned cover of Oasis's Bring It On Down. When a second string goes later they end up entertaining us with a raucous Twist And Shout as well as a rendition of Happy Birthday for an audience member's birthday, laughing off the improbability of it happening twice in the same set. 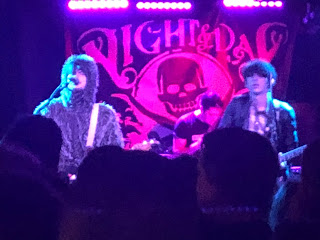 Most of the favourites from the album are included here. Imagine Something Yesterday, Dreams So Rich Lives So Poor and The Gangway are highlights, as is an emotionally charged Beautiful Pain, which shows a different side to what Trampolene do that the rest of the set doesn't reveal. Recent single Hard Times For Dreamers is delivered with an anger at the system that puts people down, Jack offering his forthright and basic opinions of the Tories at a number of junctures in the evening's events.

One minute Jack's on the stacks in front of the speakers, the next he's striking a rock and roll pose and then he's amongst us. It's impossible to take your hands off the front man, but you have to commend Wayne and Rob for the way this would all fall apart with Jack's unpredictability forming so much of what. They add in early single Bourgeoisie Girl on his suggestion and they don't stick to the setlist that's down by their feet.

The crowd love them though, it's the outsider belligerent spirit that forms the bond between band and audience, no more evident than when Poundland is ad-libbed with lines shouted from members of the crowd or when Jack crowd surfs after handing his guitar to someone at the front whilst he does on Storm Heaven, their final song, which is dedicated to Jack's grandfather and which ends with the three of them facing each other in a triangle letting loose.

Trampolene have been around now for what seems like an age, they're continuing to provide a rebellious alternative to the mainstream, you never can quite tell what's going to happen next, because they don't know themselves. Unorganised chaos never does ensue though as they've got a clear head when it comes to ensuring that they walk the line between control and lack of it. Their crowd is growing gradually, a slow burn despite the explosive nature of their live set.

Their tour takes in Blackpool Bootleg Social (April 27), Sheffield The Harley (28) and London Scala (May 9).