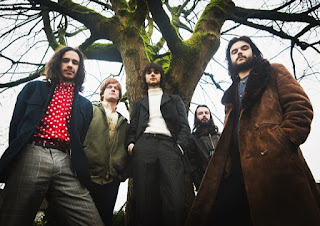 Back in September 2017, I was sitting in newly opened vinyl café, Honey Beat, in Altrincham, chatting to my friend Allan about music. He was excitedly recounting anecdotes of his new discovery: Cheshire based five-piece, The Big Peach. I didn’t think too much of it at the time, but fast forward to April 2018 and I saw Allan, once again, enthusiastically posting about this band on social media in the run-up to one of our favourite annual festivals: When in Manchester.

Whilst mulling over which bands I would like to interview and see, Allan’s infectious passion for Big Peach led me to follow his lead and watch them perform live. I was blown away by them. Not just for the music, but for the sheer buoyancy of the atmosphere and liveliness created by the crowd. It was very quickly evident that Allan’s eagerness for this band was very much warranted and I couldn’t wait to interview them with him after the gig. And we did.

As we squeezed into an upstairs room in The Castle, we started discussing their musical influences which are evidently rooted in the 60s. All at once, names were being fired at me from every band member, with artists such as The Byrds, The Beatles, The Rolling Stones, The Doors, Dr Feelgood, Crosby Stills and Nash, as well as Neil Young and The Kinks. The list was vast, but of those, certain ones had a greater impact on the band than others: “The Kinks are a big influence of ours” Henry explained, “Even our suits are The Kinks, we try to go for a Ray Davies look” he furthered. However, there’s more to it than just Rock and Roll, seemingly the band are also inspired by Motown.

What interested me about this band, was this clear 60s sound and style attracting a young audience. You could be forgiven for thinking that with this retro look, and nod to a musical genre that was popular over fifty years ago, that the demographic of people at their gigs would be of an older generation, and yet this isn’t the case: “I think history repeats itself” offered Henry, “Guitars come back, then they die out, then they come back- like with Britpop for example”. “We’re not really bothered whether it’s popular or not” said George, “I think a lot of people realise that we’ve got a modern twist on quite an old theme and a lot of our influences come from modern music too, such as Bad Liquor Pond and we when listen to stuff like that, as well as Brian Jonestown Massacre, it allows us to have a bit of a spin on a 60s theme”, he explained further. As Harry added: “When I’m writing a song, I’ll have been listening to The Kinks that day, so that will be there”, but Allan - affectionately known by the band as their ‘Brian Epstein’ - pointed out “The lyrics are very modern”. And that is exactly it: A modern edge with a 60s vibe, which makes for a very fresh and exciting sound.

Of this new sound which they have created, I was keen to find out if they were part of a wider scene of other bands with a similar sentiment. “I think we are the only ones who sound like us” Harry had to say. Henry added: “We get told that there’s no-one that sounds like us”. “When you look at the line-up for When In Manchester today, it’s been really strong, but there’s no-one that sounds like us”, George told me. When they heard themselves on the radio this was apparent too, as Harry explained “In a way we want people to sound like us so we can fit into a scene, but at the same time we know we’re different”. And this isn’t a deliberate thing: “We don’t try to sound different” Henry said.

As I delved into the band’s history, it was immediately apparent that here was a band with strong friendship bonds, and in fact among them, Harry and George are brothers. George explained in further detail “Harry, Henry and I have been writing for about five years now” and Harry told me “We could write songs before we could play guitar properly, then we started doing an open mic night in a local pub and met the others” And they all agreed that being friends with each other was hugely important. “We’re not just a band that have been thrown together” (Harry) “We’re mates before the music” And with that, comes a mutual respect of the various roles that each band member plays.

As I was conducting the interview, listening to the way they interacted it was clear that they all appreciated the various parts they all played in the band, each member’s strengths and individuality. Whether they realise it or not, I think they empower each other to be themselves, and I love this band for that. As George said: “We didn’t finish the songs, until we met the {full} band. We’ve written the songs as a five” And Harry furthered: “Our Rain Song was written on an acoustic guitar, and it wasn’t that long. But since we’ve had a band we have a two-minute intro which sounds like a melodic flute, and that’s the best thing about the song”. We don’t regiment it” Henry explained, of the song-writing process. “We’re a family and everyone’s equal” he went on to say.

Collectively, they have only been together as The Big Peach for a year. Pretty impressive when you consider they have an album out, played to a room jam-packed full of people at The Castle and have had decent radio play of their songs. Their music is available on all major streaming services as well as iTunes and CD.

I for one, left When In Manchester on a high seeing this band close the evening, and it left me wanting to see them perform again, such was the magnetism of their performance. You can catch them at The Peer Hat alongside their friends The Goa Express on May 21st as part of the Astral Elevator club night, as well as Blackthorn Festival over the weekend of 20th-22nd July. Watch this space: this is very special band who I truly believe deserve all the success in the world.