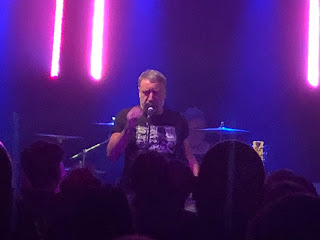 Ahead of their US tour playing the combined Substance albums of both Joy Division and New Order, the latest in the series of retrospective look back concerts from Peter Hook And The Light, led by the unmistakable one of founding fathers of both bands. Two hundred or so packed into the music room of the Trades Club at Hebden Bridge to celebrate some of the most iconic sounds of a generation.

It's clear right from the start, before even a note is played, that we're in the presence of some of the most hardcore followers here. As he gets ready to open with he's already joking with three of the audience and later in the set he touchingly dedicates a song to the father of one of the fans who died the night before. Whilst his former band are off doing projects with synthesizer orchestras, Hooky is out on the road in venues like this giving value for money with a massive thirty-one song set taking songs that would otherwise never be heard live again to a still active and sizable audience, the scale of which is demonstrated by the length of their upcoming US tour and their ability to sell out the likes of The Albert Hall in Manchester.

This isn't just a greatest hits run through the two volumes of Substance though. The New Order version is preceded by three songs, including Cries And Whispers and Lonesome Tonight from the second disc of the album as well as the Peel Session track Too Late which opens proceedings. The three rarer songs that open up proceedings don't dampen the audience's spirits as they know what's to come and playing the album in order after that means there's no surprises as to what's coming next.

There isn't intended to be any element of surprise though with this type of show, the audience know what they're going to get and Hooky and his band seek to deliver it. And that they do. Of course the bigger hits are the ones that get the best reception and get the room bouncing, testing The Trades' floor to its very limits, but the likes of Temptation, Blue Monday, Bizarre Love Triangle and True Faith are delivered with a harder edge that the more synth-heavy versions New Order have played since Hooky's departure (even without the orchestra). Whilst Hooky is obviously centre stage and it's impossible to mistake those bass lines for anyone else, it's very much a collaborative effort and one that's appreciated by the crowd, who it's abundantly clear are here for the music and not interested in the politics which are kept out of the night's proceedings.

The nature of the Substance albums, ie a collection of singles, means there's little pause for breath as there often are in these shows. Confusion, Subculture and Shellshock reverberate round the room as the crowd, most of whom are old enough to have seen these songs at the time of original release. Like us, Hooky looks like he's having a whole load of fun living these songs without the sword of Damocles hanging over him. After fifteen songs, they adjourn for a short break to catch their breath back before returning for part two. 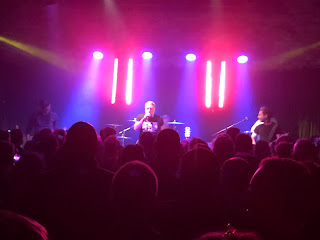 The second set opens with Turn The Heater On, a cover of Keith Hudson's reggae classic, that New Order covered for a Peel Session and which Hooky describes as one of Ian Curtis's favourite songs. Substance, the Joy Division compilation, originally only had ten songs, so it's preceded by another five including No Love Lost from Ideal For Living, b-side Novelty and rare compilation track From Safety To Where? (never previously played live before this tour) as well as Isolation and Disorder as tracks from their two studio albums.

The Joy Division songs are much more suited to Hooky's singing voice than the New Order songs that came in the first half of the set. Whilst no one could match Curtis's delivery, the likes of Transmission, She's Lost Control, Atmosphere and the night-closing Love Will Tear Us Apart (which, let's face it, is one of the greatest songs ever written, by anyone) feel like they're in the right hands (or lungs) here and now. Whilst it'd be easy, and many of these album-type shows often fall into that very trap, to just turn up and regurgitate the songs parrot fashion, it feels like Hooky still has something to prove, that he's still dealing with unfinished business, determined to never let the legacy and his part in it fade from view.

There may be many cynics about the business model Hooky has adopted post his departure from New Order, but the audience response, and the fact that they keep coming back, tells its own story. There's an appetite for these songs to be heard and an appreciation of the role tonight's master of ceremonies played in their creation. It might not be New Order or Joy Division, but the spirit of both is beating through every song of the thirty-one we're given in the two and a half hour set. To paraphrase the lyrics of one of the set's many highlights Digital, don't ever fade away.

Email ThisBlogThis!Share to TwitterShare to FacebookShare to Pinterest
Labels: Peter Hook And The Light