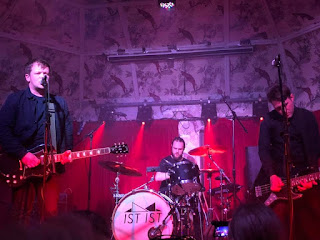 Another set of sold out signs greeted Ist Ist’s hometown EP launch at the Deaf Institute. The theatrical music hall setting could have been made for nights like this as the couple of hundred fans, here on the growing word of mouth around a band that eschews colourful videos, “bantz” and the lad culture of so many and relies solely on the power of their music. 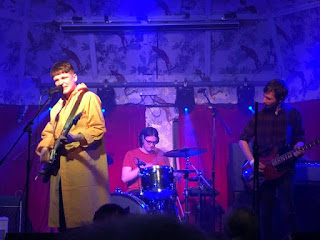 This is Tindrumm's first gig of the year and coincides with the release of a new single Shoot It from their second album. Their live sound is fleshed out from the studio recordings as Ryan and Mat have brought additional musicians on board. They still retain a lot of the cinematic theatrical stylings of the recorded material, but that harder edge works in the live environment and goes down really well with an appreciative crowd that's already filled up most of the venue by the time they make it on to stage.

That Ist Ist have achieved so much so far under their own steam is impressive, but once you hear them play, particularly live, the reasons become blindingly obvious. A guy we talk to at the end makes the Joy Division comparison they hate, but then explains as he saw them in their day it’s not the sound, it’s the uncompromising primal nature of how they do it like no one else he’s seen in the intervening years that makes it a totally valid reference point. 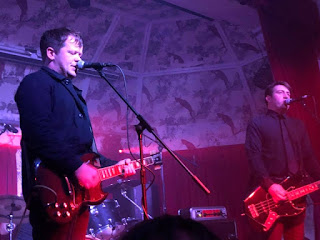 It’s not hard to see exactly what he means. Songs explode for a moment, out of nowhere, and threaten to actually, not literally, rip our heads off. And the set is crammed full of them with at least another half a dozen not even let out to play tonight. There’s a stream of singles - White Swan, Night’s Arm, Silence, Strangers, Right Before Your Eyes - plus the four tracks from the Spinning Rooms EP that would have made up a debut album that would go down in legendary mystique were they to play that game and all are present and correct tonight. They demonstrate the variety and range Ist Ist have but at the same time a clarity of purpose.

Add into that the techno styled one line battering ram of Things Will Never Be The Same Again, so simple in concept, but murderously brutal in its execution, which has the crowd taking a step back as Adam screams it as if it’s his very last words on earth before a painful death. There’s also two new songs - The Son Is The Father and Exist - that are the sound of a band stretching, breaking out of a cocoon and spreading their beautiful black wings into the world.  Emily, from the EP, builds like a dam about to burst, a watched pot waiting to boil, and when it does it creates an unstoppable force that lifts the crowd up with it. 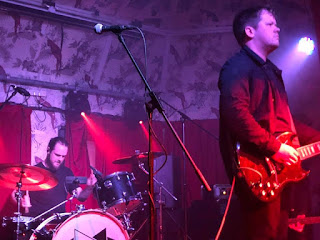 All that said, there's a subtlety to much of what Ist Ist do. The crystal clear sound in the Deaf Institute allows you to hear the detail of some of these songs, the way Joel dictates the pace and direction of the song without you realising, changing it beat by beat rather than turning it volte face, the way Andy's bass cuts through the fog, sharp, cutting and aiming for the jugular whilst Adam commands the whole of the fret board in a manner that often gets overlooked because of the ferocity of his vocals.

They take a breather before a well-deserved encore consisting of Night's Arm and a blood-curdling Diversion, a song that would confuse even the most hi-tech of sat navs, such is the winding, swerving path it takes, obliterating any obstacles that stand in its way. Adam asks us as the song stops dead still if we're still here and then they veer off in the opposite direction with us hanging on their coat tails. And then they disappear off into the night, leaving the audience shouting for crowd favourite Rats. Ist Ist have moved on though from those two minute blasts that they announced themselves with to something more spectacular, complex and absolutely enthralling. They are, simply, the best live band in Manchester right now.