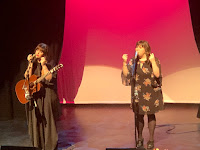 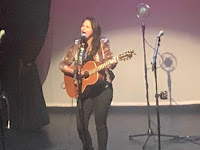 The Secret Sisters brought their Grammy-nominated album You Don’t Own Me Anymore to the reverential surroundings of Bury Met’s newly-refurbished Derby Hall for an intimate and at times amusing evening of song and story-telling with support from Bedford-born but Tennessee-obsessed songwriter Danni Nicholls.

Danni’s seven-song set mixes three tracks from each of her two albums, 2013’s A Little Redemption and 2015’s Mockingbird Lane with one from her third album that’s she about to go to Tennessee to record in May. Her songwriting makes her a perfect foil for The Secret Sisters, lovingly crafted and steeped in the traditions of country music, but with an open and warm accessible style of her own. She sings about heartbreak, particularly on the melancholic Beautiful Broken off Mockingbird Lane, which she recalls was reviewed as a “break-up album”, yet turns this round with a song about learning to “self-love” on new song Ancient Embers.

Like all great country singers she’s full of tales to accompany the songs as well, joking about her obsession with Tennessee, name-dropping the likes of Al Perkins then stopping herself and laughing at her “fan-girling” and recalling her first meeting with The Secret Sisters being chasing them through an airport to tell them how much she loved their work. Later, the sisters speak eloquently about their love of Danni’s music and it’s not difficult to tell why the feeling is mutual. After cajoling us into a gentle sing-along of the chorus to Back To Memphis, she finishes with A Little Redemption, the title track of her debut album and leaves an appreciative crowd mightily impressed.
After a brief interval, Laura and Lydia take to the stage and start with Tennessee River Runs Low. Immediately, the audience are awestruck by their effortless control of two-part harmonies when singing together and the way just a little change in tone of voice can impart so much emotion into the songs. They may only be armed with Lydia’s acoustic guitar as instrumentation, but with The Met’s crystal clear sound as their ally, it’s all they need to win the love of the reverent Sunday night crowd. At the end of the song, Laura jokes that they don’t have any happy songs, only sad ones, and we’ll need to wrestle any joy from them as we can.

Mississippi is preceded by Laura telling us how much they love digestive biscuits at which point she pulls several packets of them out of a bag at the side of her monitor and Lydia asking “Do you want to hear a murder ballad?. They later also talk about getting water bottle holders on the day they found out about their Grammy nomination, and how they both changed their lives, but the former was something they’d wished they’d had eight years ago. These themes come back in the friendly and warm between song chat that charms even those who aren’t totally disarmed by the music. 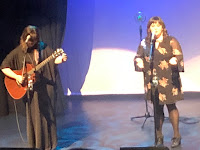 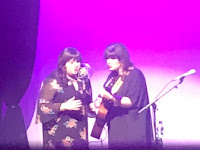 They follow Mississippi with Till It’s Over, two highlights of the You Don’t Own Me Anymore album. They’re quick to reference modestly the impact of Brandi Carlile who they worked with on the album. They’re followed by Black And Blue, from their second album Put Your Needle Down.

They move closer, again humorously ribbing each other about having to stand too close together, to sing four covers around a vintage-style microphone in the centre of the stage. Before that though, they explain the importance to them of cover songs as a means of preserving music that might otherwise get forgotten as time moves on, which is an interesting theory that we’ve not always considered. They start this section with Graham Nash’s Wasted On The Way, which they’d performed with him last year which prompted Laura to reveal a crush on him despite his age. They apologise for the lack of three-part harmonies, Laura blaming it on their mother only having two girls, to which Lydia quips “and that ship has already sailed” to the amusement of the crowd.

They argue amongst themselves which one would be Paul Simon and which Art Garfunkel before their version of Kathy’s Song. Laura claims Paul’s spirit and Lydia playing guitar as they light-heartedly argue about it. They dedicate The Everly Brothers’ Let It Be Me to a couple celebrating their fiftieth wedding anniversary before finishing the covers section with a gospel standard to recognise the fact that it’s Easter Sunday and they betray that they usually spend that at home with family and it’s strange for them to be away.

Laura confides in us that many of their songs come from her failed romantic pursuits prior to meeting her husband, and the next two songs they play are about one particular “wet rag” as If Not Me and Bad Habit, both from Put Your Needle Down, pick over the bones of a failed relationship and the pain associated with it. Like everything they do, it’s raw and descriptive to allow us to relate the tale to our own past, something The Secret Sisters are very adept at doing in their songwriting.

As you’d expect, the tail end of the set returns to You Don’t Own Me Anymore, starting with a song which they dedicate to their father called Carry Me Home. It’s followed by the album’s title track, and an apology for it being seven years since they last toured the UK. The title refers to a lawsuit that their ex-manager brought against them after the release of the second album that nearly finished them, and they talk eloquently and without rancour about how they slowly found their love of songwriting again after thinking they were done. If it were possible by this stage, it just makes everyone in the room love them even more.

They tell us they’re not going off for an encore, like they’d do “if we were professional” because that ritual is a waste of time and “you all want to go to bed”, laughing that they’ll also tell everyone back home that we refused to let them leave the stage. The two-song conclusion to the night starts with what they call their “radio hit” He’s Fine, also about the “wet rag” that Laura referred to earlier. They joke about it earning them millions of pennies and that when it was written they never expected the subject to hear it, but apparently it’s on heavy rotation on his favourite radio station in Tennessee. It’s not hard to tell why this song has done so much for them; the almost resigned to fate lyric brought to joyful life with just the acoustic guitar and the energy in their voices.

They leave us with an acapella version of Irving Kaufmann’s standard Tonight You Belong To Me, the sound of two sweet voices with only the click of fingers for accompaniment a perfect conclusion to a night where we were both intoxicated by the music and charmed by Laura and Lydia’s humble, honest and unassuming stories either told in words or in song. They promised they wouldn’t take seven years to come back, we’re going to hold them to their word.