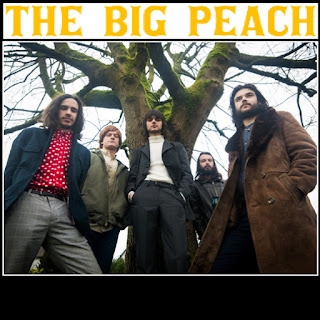 The Big Peach have created a stir on the Manchester scene over the past six months with an endless appetite for gigging and for their energetic live shows and ability to craft their influences into something that is unmistakably them. As they prepare to headline this year's When In Manchester Festival, we take a closer listen to their self-titled debut album.

Give Up Askin’ opens up proceedings and sets the tone for a record that’s been honed in the open mic scene around Manchester. There’s no shiny production as the harmonica solo kicks in, the lo-fi guitars and keys swirl around as the tale is told of an unrequited obsession. Politician follows in similar vein stylistically. The title gives away the subject declaring “they’ll steal your money and your soul and it’s all a lie, you got to see right through, read between the lines” before a guitar solo, and they like solos without ever overdoing them, takes the song away. Like someone like The La’s did, they stick to the basics of songwriting craft and warmth in the lyrics to make an impact and they do that successfully.

Game We Play talks of the trials and tribulations of romance asking “why don’t you know what you want?” Again it’s entirely bereft of any pretence, dealing in traditional well-worn styles but delivering them with such style and precision that you can’t help but fall for them. Free And Easy is even more laidback, a gloriously languid riff running through it, effortlessly charming and toe-tapping. Try listening without involuntarily being drawn in.

Rain Song, all six and a half minutes of it, slows things down, reclines and waits for its moment. Sung in an accented voice that adds to the picturesque description of watching the world go by as the weather turns, it represents a change in mood but not in their approach. Lil Suzie ramps things back up, so be prepared for the foot twitches, as they sing an ode to a girl “the one I love, you’re the one I’m dreaming of.” Like what’s gone before there’s no big show-off moments, just a deep appreciation of the music they grew up with and adding their own twists and personalities to it, a theme that runs through to the next track Rope And Love where they sing about being tied up, metaphorically, by the latest focus of their amorous intentions.

How Can You Say ratchets the guitar solo up a notch without throwing the baby out with the bath water. It’s a little more claustrophobic than what’s gone before, but without losing the genuine warmth that emits from the album. Yes You Can’s five and a minutes start to drift towards country without losing the emotional simplicity and directness.

They save the best till last. It’s Alright Mama is a buoyant joyful ode to loving what you’ve got and not dwelling on what you don’t. The music’s unerringly infectious bounce matches the intent of the lyrics perfectly, particularly as the harmonica solo kicks in and only the blackest of hearts wouldn’t feel a little joy.  And that, in summary, is The Big Peach's debut album - unerringly true to their roots and instincts, music recorded in the spirit it was conceived, warts and all.