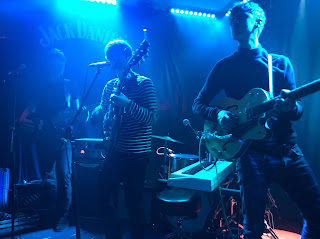 With a new single Days Of No One released a couple of months back, High Hazels made their long-awaited return to Manchester after nearly three years since their last headline show here with a packed out basement show at Jimmy's.

It feels like High Hazels have been away a long time. The Roadhouse was still open and running shows when they last headlined a show here three years ago back in May 2015. Since then they've been relatively quiet, save for last year's Weak Sun EP and recent single Days Of No One as they slowly put together the songs for their second album to follow 2014's self-titled debut. The only one disappointment is the lack of any brand new material in the set as Days had left us hoping they'd reveal more about what they've been up into the past twelve months tonight.

Tonight they've packed out Jimmy's, no mean feat for a band that haven't been here for so long, and, as they mention a number of times, are from across the hills in Sheffield. They do mute any chants of "Yorkshire" though, because James tells us "that's not what we're about." And he's right. High Hazels produce the sort of songs that transcend geography, regional affiliations and draw people together. 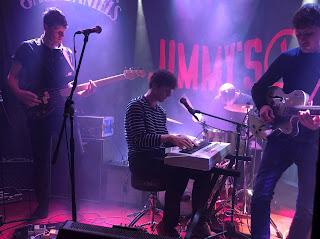 The articulate attention to detail of their recorded output is translated almost verbatim to their live show, the likes of Valencia, Loneliness Inn, Hearts Are Breaking and the beautiful keyboard ballad that is Days Of No One are beautifully crafted and delivered with a heart-warming and, at the same time, heart-melting precision and emotional clarity that holds the attention of the crowd and draws them closer.

From the early EP track French Rue, which goes back to the band's very first shows over five years ago to the aforementioned Days Of No One, there is a consistent quality to these songs. James' voice is rich and emotive, living out the words of these songs as his band mates, Scott, Anthony and Paul, create the mix of soaring, euphoric melodies and moments of insular introspection. The likes of Hearts Are Breaking from their debut and Sequin Eyes from the EP that make up the conclusion of the set possess the sort of aching romanticism that makes them timeless whilst so much around these days can be easily carbon-dated.

It feels like High Hazels are at a turning point. It's very easy these days to go out of fashion quickly if no one hears from you as another band will come along and take your place. However, the fact that they can still draw a crowd like this away from home after being so quiet for so long is a pretty impressive achievement, yet they need to build on the progression shown on the tracks off Weak Sun and Days Of No One. Their journey to date has been a slow one, but only a fool would write off a band with such undeniable technical ability and four sets of ears that instantly catch a tune and make you fall at their feet playing it.