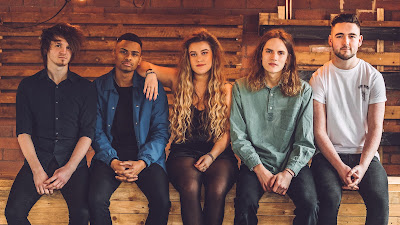 Having done a bit of reading in the music press recently, about the lack of female representation within the music industry, imagine how pleasantly surprised I was to see several bands at this year’s When In Manchester festival featuring female musicians. One band in particular, Humbar of Sheffield, caught my attention for their unique blend of soul, jazz, funk and R & B coupled with sassy, confident female vocals.

As their set was played, it occurred to me how much Julia - Humbar’s vocalist- sounded like a modern day South Yorkshire version of Amy Winehouse. When I caught up with her afterwards it turns out that Winehouse, was indeed, the main inspiration for the young singer growing up, and in fact she and her mum would listen to Amy’s music together. “There’s quite a few artists that come under the genre of Neo Soul, that are in between funk and soul and we kinda head towards that direction when we’re writing” Julia told me. It seems fitting that Humbar, being an independent band and performing at an independent festival, would be further influenced by other contemporary independent artists, among those being: Jordan Rakei and Jorja Smith.

I asked Julia what it was like being the only female in the band. I think I was looking for an answer which had a degree of gender separation in it, having read about gender inequalities within the music industry, and yet that wasn’t apparent here. “We’re like a big family” she explained. “I love them all to bits. It’s a piece of all of us {the band} it’s not like it’s one person who writes: we do it together” she went on to say.

Interestingly, the band were together before lead singer Julia started. They had many of the songs written and ready, but no vocalist. Enter Julia to fill the void: “The way that I looked at the music, was completely different to the way they looked at it”, she told me. “They said they would never have seen it my way, so it was really good” she explained further.

Only four years together as a band, When In Manchester festival marked their very first gig outside of their hometown of Sheffield. “Everybody knows everybody in Sheffield” Julia told me. “The scene is very close knit” but today was Humbar’s first gig over this side of the country. I asked her if she was happy with the turn out today, given that her band is less well known in Manchester. She had this to say: “We literally couldn’t believe it. At soundcheck, there wasn’t a soul up there, so I did not expect all those people to come up: that was so nice”.

Humble words indeed, for a band whom I believe are supremely talented and deserve to be playing to wider audiences with the fullness of time. Certainly, seeing them perform live with effortless charisma, people loved what they were witness to, dancing and swaying to the infectious tunes which we were privileged to be watching. I have high hopes for their future.

Humbar currently have two EPs out and are hoping to record a third EP or a single later this year. You can catch them at Peddler Market in Sheffield on the 4th May as well as a further date on 7th July at Sharrow Festival.

They are Julia Guest on vocals. Jacob Matthews on keyboards, Felix Watts and Lewis Carr on guitar, Danton Laromani on drums and James Armstrong on bass.

Email ThisBlogThis!Share to TwitterShare to FacebookShare to Pinterest
Labels: Humbar