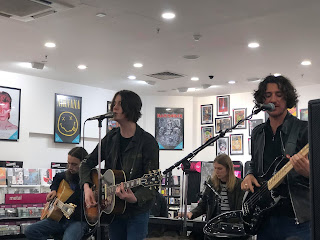 Blossoms celebrated the release of their second album Cool Like You with an intimate stripped-down performance of seven songs from the album plus a requested crowd favourite on the top floor of Manchester's HMV store on Friday evening.

The roar is deafening as Tom, Charlie, Myles, Josh and Joe emerge from the back room and make their way down the side of the store past a set of fans that vary from schoolkids to their parents' generation. It's one of the remarkable things of Blossoms' rise, and potentially crucial to it, that they've got an appeal to all ages. The new album, reviewed here, is set to emphasize that still further, it's drenched in gorgeous electronic hooks that wouldn't feel out of place on an eighties compilation of the bands people of my generation grew up with, whilst still retaining the timeless ear for a song that characterised their self-titled debut, yet they do it with a freshness and a lyrical dexterity that means the younger members of the audience hang on every word as if Tom is telling them their life stories and trials and tribulations.

The seven songs from the album make the transitions beautifully from their recorded versions to these rearranged takes on them, testament to the inherent quality of the songwriting craft behind them. Already people are singing every word, even on those that only were revealed at midnight. It's all aided by a crisp clear sound that would put established venues to shame. Each song feels like a single in its own right, yet collectively they make a formidable album that builds on the debut.

Where the first two singles, There's A Reason Why (I Never Returned Your Calls) and I Can't Stand It, every bit as shimmering and glorious even without some of their bells and ribbons, might be the limit of great songs for many bands, they feel like they're flowing off a conveyor belt here. Cool Like You, Unfaithful (which Tom makes clear is not about him, but a friend), How Long Will It Last, I Just Imagined You and the outrageously tender and heart-wrenching Love Talk that deals with life on the road and leaving loved ones back at home. 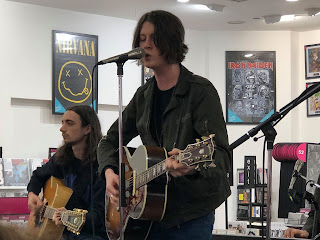 Unlike many bands that break through they've not lost the ability to connect with their audience too. There's an amusing moment before someone demands that they play Imagine. Tom says he knows the song but isn't going to play it, but then looks at the person who shouted it who's leaning against a rack to stand up and chides him gently for being pissed. He also talks to a young girl Evie at the front, who's attending her first gig, and dedicates a song to her, whilst reminding Joe that it's also the name of his first girlfriend with a grin on his face.

As they finish the seven songs, they're told there's time for one more song. They leave it open to the audience to decide which, and surprisingly, to us, it's Honey Sweet that's chosen rather than one of the bigger singles off the debut. As the opening bars kick in, the store is turned into a wave of arms and mobile phones in the air desperate to snatch a snippet of a song that has clearly captures many hearts and minds.  They then hang around to chat with everyone and sign copies of the album.

It's great to see a band of their size still do this sort of thing. Whilst it'll obviously help in the race to secure a second number one, you sense that they're not doing it out of duty as many do, but because of the connection they've made in the city where they played their first and their biggest gigs to date. Whilst they'll always be defiantly Stockport, Manchester still wants its share.

Blossoms played There's A Reason Why (I Never Returned Your Calls), I Can't Stand It, Cool Like You, Unfaithful, How Long Will This Last?, I Just Imagined You, Love Talk and Honey Sweet.