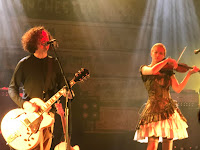 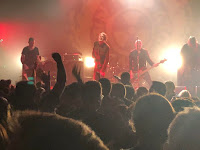 With Love From Stourbridge, the joint tour of The Wonder Stuff and Ned's Atomic Dustbin, hit Manchester Ritz on Saturday night. The rotating headline tour saw each band play a twenty-song set of songs that took much of the audience back to their youthful days when the two bands were a permanent fixture in the charts.

On paper The Wonder Stuff would be headlining this tour, given their run of top ten singles in the early 1990s that saw them commercially eclipse Ned's Atomic Dustbin in that respect, but it's tribute to Miles Hunt's modesty and joy of performing that he and his band seem unperturbed by opening up proceedings. The crowd have already packed the hall and the Ritz's infamous bouncy dance floor gets one of its most severe examinations in a long time.

Their set focuses primarily on their first three albums, understandable given the indie hero status that Eight-Legged Groove Machine and Hup gave them, before The Size Of A Cow put them firmly in the top ten and brought them to a wider audience. They're a different band these days, but these songs possess timeless qualities that mean they still send the front rows into one heaving mass, one that's lighter of palate (ourselves included) and less fleet of foot, but no less energised by the likes of Can't Shape Up, Who Wants To Be The Disco King and Unbearable. During Mission Drive, we're treated to the impressive sight of a crowd surfer stood on the shoulders of their friend, arms aloft and dancing the best way she could.

Miles asks us whether we want to hear It's Yer Money I'm After Baby or Radio Ass Kiss and then they play both. The latter's fitting in a way as the two new songs they play - Don't You Ever and For The Broken Hearted from their last album 30 Goes Around The Sun - suffered the same fate as is referenced in the vitriolic rant at the way songs get playlisted or discarded. The crowd give them the respect they deserve though, even if also helped to serve as a breather after throwing themselves around to On The Ropes and Caught In My Shadow.

It's credit to them though that they still want to make new material when they could rest on their laurels and go down the classic album tour route ad infinitum. The ecstatic response to their big hits suggests they could do just that, and also confirms the importance of them to the youthful memories of the crowd, but the energy and passion they display more than shows that they're doing this for the love and to have as good a time as the people out in front of them clearly are.

The Wonder Stuff played Red Berry Joy Town, On The Ropes, Don't You Ever, A Wish Away, Can't Shape Up, Mission Drive, Circlesquare, Caught In My Shadow, For The Broken Hearted, The Size Of A Cow, Golden Green, Cartoon Boyfriend, Room 512 And All The News That's Fit To Print, Here Comes Everyone, It's Yer Money I'm After Baby, Radio Ass Kiss, Who Wants To Be The Disco King?, Give Give Give Me More More More, Unbearable and Ten Trenches Deep. 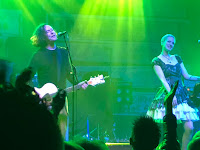 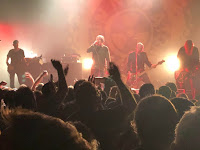 Ned's Atomic Dustbin were always the darker harder brother of the bands that came out of the Black Country scene. While The Wonder Stuff flirted with pop and Vic Reeves and Pop Will Eat Itself went dark and electronic, Ned's remained fairly true to their roots and tonight that shows too. Harsher and more abrasive, their crowd are less into the indie disco classics and take the work as a whole body. Not Sleeping Around and Until You Find Out hit us second and third songs in, whilst arguably their two best known songs Kill Your Television and Selfish are saved for the triumphant encore.

In between they focus on their first two of their three albums - fifteen of the twenty songs coming from God Fodder (nine) and Are You Normal (six). Unlike The Wonder Stuff this is their original line-up playing the songs they wrote and recorded together. They haven't ventured into new material territory yet, but that matters little to the heaving mass of the crowd in the now sweltering Ritz. Their unusual two-bass approach, still uncommon these days, gives the songs a different dynamic to most. They're still as direct and fuss-free as they were, and despite Jon's protestations to the contrary, they still possess an energy that transmits itself from the stage to the audience.

Whilst they might not commercially be able to match the success of The Wonder Stuff, they match them for the response they get here, testament to the fact that they have remained true to what made them shooting stars for the two years between those two albums before the traditional music business snobbery aimed its arrows in their direction. They were never about making artistic statements like Blur or Suede who became the darlings of the music press as Ned's were dismissed, but one look around The Ritz shows just how much they meant to the people that really mattered - the gig-going audiences for whom tonight was a chance to take a trip down memory lane, let down any remaining hair and let loose for a few hours.

Ned's Atomic Dustbin played Suave and Suffocated, Not Sleeping Around, Until You Find Out, Trust, Walking Through Syrup, Less Than Useful, Capital Letters, A Leg-End In His Own Boots, Stuck, Throwing Things, Terminally Groovy, Legoland, Who Goes First?, Traffic, Cut Up, Happy, Grey Cell Green, Intact, Kill Your Television and Selfish.