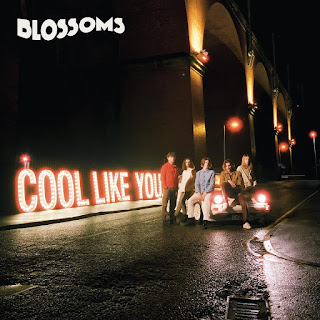 Blossoms return with their second album Cool Like You, less than two years since their self-titled debut spent two weeks at number one in the charts. Recorded over the course of just twenty-two days on breaks from their endless touring schedule, it's drenched in the glorious pop gloss for large parts of the record but yet is more thematically consistent than its predecessor and sounds like a band that's prepared to make another step up.

That theme is young love, or more accurately the trials and tribulations of it. Whether Tom is singing in the first person or about other people, the simple yet articulate tales that he tells throughout Cool Like You are designed to speak to their fan base, male or female, about the pains, the angst, the uncertainty of growing up and learning lessons. And they've set it to gloriously euphoric tunes that take influences from left, right and centre and package them up into something that's brilliantly simple in execution like the very best pop music. And make mistake, this is pop music, popular despite the indie snobbery will await this record in self-anointed cool circles.

There's A Reason Why (I Never Return Your Calls), the recent single, opens up Cool Like You, and sets down a marker from the minute the synth-drenched intro kicks in through the build into the "is it me or just a dream that never dies" line that leads into the song's uplifting chorus. Like much of what's to come it's unashamedly sparkling and shiny and irresistible to those who want songs to stick leech-like to their sub-conscious.  Can't Stand It, the lead single, shuffles in marvellously off-key for a few seconds, Tom ruing things he's said and the fact he lies awake at night thinking about the mistakes he's made. When he declares "Why do I fall in love with the least bit of attention, I need some direction, affection" he's talking to the confusion that many feel, but few express so openly, honestly and backed with a track that calls to mind all sorts of the very best eighties dancefloor pop.

The album's title track deals with emotional turmoil and lack of sleep (a recurring subject) at the inability to simply shrug feelings aside and act like you're not bothered. The album's crisp precise production allows all the subtle nuances to be heard without rendering it clinical and allowing the tone of Tom's voice to emphasize the words he's singing. Unfaithful clocks in at three minutes, the perfect length for a pop song, starting with a bold electronic shot across the bows that comes back throughout the track with the chorus "It's fatal, unfaithful" as the song manages to squeeze in the first guitar solo of the album and a section where Joe's kick drum takes over dictating the middle eight's build back to the chorus.

Stranger Still slows down the pace a little, Tom's voice taking on a reflective nature showing some vulnerability as he considers the perils of life on the road "please believe me, I don't want to be a star, thought about you this evening, wondered how you were feeling" before the song concludes with the simple unequivocal "if I had you to myself, I'd be happy where I am" on repeat. How Long Will It Last deals in the "will we won't we?" stage of relationships, Tom questioning "sleepless nights in and out of love with you, it's the last chance to catch this flight." Like so much of the first half of Cool Like You it expresses emotional insecurities wrapped up in sugar-sweet synths.

The second half of the record diverts from that track a little, showing a more experimental side to Blossoms without veering too far off course. Between The Eyes starts with a verse that's cloying and claustrophobic before opening up in the chorus whilst I Just Imagined You sets off at a hare's pace and never slows down, a magnificently urgent distracted hook underpinning the song as a vocal call-and-response kicks in. It all feels effortlessly simple in its execution, but that is so often the case with the very best music of this type.

Giving Up The Ghost starts with Tom singing about "we left our initials on some door" about another love that comes back to haunt him at night. A keyboard riff gives the song drama and intent and a brooding menace that doesn't really appear on the rest of the album. Lying Again returns to the carefree vibe of the first half of the album, even if the lyrics where Tom confesses "although I speak with intent, I'm lying again" about the gap between what you want to do and what you actually do.

They save the best for last though. Love Talk is slowed down, opening with a repetitive keyboard riff that ripples through the first minute of the song, before it blossoms into glorious life as Tom lays bare the emotional torment of never being home that the success of the last few years has had on the band and the ability to form relationships - "you're just a flight away, you give me that you talk, it only made me feel worse, I hate leaving the town that owns me."

Like the band themselves, Cool Like You is a sign that fame and fortune hasn't changed them one bit, still down to earth, affected by the same things and therefore being able to write songs that their audience can relate to. It's unfussy, uncluttered and isn't trying too hard, the production is light touch enough to allow the simple qualities of the songwriting to shine through. It'll delight their ever-expanding fan base and charm those that are discovering them for the first time. They unashamedly flaunt the music they love in what they do without ever copying it. The indie thought police might be all over them by the time the album comes out but they and the hordes that will swoon at Cool Like You's feet will not care. This is the sound of perfect modern pop music made by five lads from Stockport.