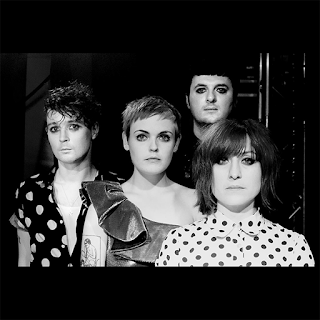 Desperate Journalist have just released a new EP entitled You Get Used To It as a follow-up to last year's Grow Up album. We caught up with bass player Simon as he returned home from a European tour ahead of Friday's headline set at London's Oslo for a chat about the EP, their recording methods and their appeal in Germany and the rest of the continent.

For those who aren’t familiar with you, could you give a brief intro to who Desperate Journalist are please?

We are Jo (vocals), Rob (guitar), Simon (bass) and Caz (drums). An indie/post punk band based in London. We're pretty much DIY but release our music through Fierce Panda records.

You’ve just released your You Get Used To It EP? Could you tell us how and where this was recorded?

All five tracks were recorded at Dean Street Studios in Soho with our friend Keith Top Of The Pops. It Gets Better, Nothing Happens and About You were done in the Grow Up album sessions, Incandescent and The Bomb we finished off later.

We generally record the rhythm tracks live to give it that band in a room feel. Then Rob layers the guitars, and vocals go on last.

What strikes us listening to the EP and your back catalogue is the clarity of the instruments and the vocals, the fact that everything can be heard and not lost in the mix. Is that intentional and if so why do you consider it so important?

We mixed the first album ourselves at Rob's house and it does have a certain charm, but I wouldn't say we're completely happy with it. We were still finding our feet at that stage. I'm much happier with Grow Up and the new EP, most of which we co-mixed but with the benefit of proper studio facilities. It's important to us to sound how we want to, rather than letting someone else make those decisions.

Is the songwriting process a collective effort or does one of you bring songs to the rest of the band?

Rob brings most of the music to the band, and Jo writes the lyrics and vocal melodies. We finish the arrangement together in the rehearsal room but recently Rob's demos have been increasingly fully formed, so not much gets changed. But at least three quarters of us have to like the song idea for it to get finished. That's band democracy!

Jo’s lyrics are quite direct, open and unfiltered and don’t pull any punches. Do you get many people talking to you about they relate to them?

Yeah we do get people relating to the lyrics, it's a really good thing. We all grew up loving bands for their lyrical qualities as much as the music, so it's nice to be in a band with a lyricist like Jo. It's not contrived with Jo either, the songs are very honest.

The video for the lead single off the EP It Gets Better sees Jo learning to ride a bike. Where did the idea from that come from?

Jo had the idea as believe it or not, she couldn't ride a bike. The video relates to the theme of the lyrics; facing adversity I guess. Our manager James is taught her one cold Saturday morning on Hampstead Heath. Jason Weidner, who does all our videos, captured it really well.

There was a very positive response to last year’s album Grow Up and the support dates with The Slow Readers Club. Does it feel like there’s a ground swell building behind you?

I'm not sure about a groundswell. To me it feels like we're driving in the slow lane on the motorway (can you tell I've just been sat in a van for 9 days?) but we are gradually getting there and achieving the things we want to.  We really enjoyed the Slow Readers Club gigs, they have such a loyal following who thankfully seemed to really like us too.

You’ve just finished an extensive European tour. Does it feel strange that you can go and tour abroad in such a way and why do you think European audiences get you?

It's great that European audiences seem to get us. We've toured Germany a few times now so I feel very at home there. It is a bit surprising that we can play somewhere random like Munster and sell more tickets than we do in Birmingham, where two of us are from. But I really love getting to travel with the band, so I'm not complaining.

If someone reading this hasn’t heard of you before, how would you sell Desperate Journalist to them?

I'd probably say come and see us live, drink too much cider and enjoy yourself. Then wake up with a terrible hangover and put Grow Up on your record player. It's really good!

Desperate Journalist's official site can be found here and they are on Facebook and Twitter.  The EP can be ordered via their website or the 12" vinyl via their Bandcamp.