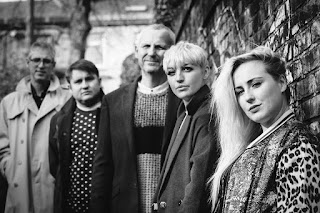 The word "legends" is used too often in music. Stuart Ralston has no hesitation however in using it to describe Blackpool's Section 25, the Factory Records greats as they grace a Glasgow stage for the first time in six years.

As I make my way through the snow and the driving rain to reach Hug and Pint, on Glasgow's Great Western Road, I'm wondering why I'm heading to their intimate surroundings and not the Barrowland Ballroom. That Section 25 remain a cult band / Britain's best kept secret some forty years after inception is a mystery. Tonight's set is a curious one. We get old and we get new. However we don't get anything from their excellent recent records, the first ones to feature the second generation Cassidy members Jo and Beth.

Laid Back Life is the first of six new songs road tested tonight and showcases a softer, more chilled Section 25 with a beautiful lead vocal from Beth and a simple keyboard refrain. The Greatest Thing increases the tempo a little and is a fine, uplifting, optimistic addition to the ranks as is All I Ask, which sees vocal duties shared by Beth and Jo.

Wretch,  from 1982's The Key of Dreams is a pulsating classic, dominated by Vincent Cassidy's beats. Of the new songs Don't Get is the hardest by some way and has much more of a punk leaning than the other ones delivered tonight.

Beth urges the crowd to live for today and forget about tomorrow as she introduces Charnel Ground - she wishes she could ask her Dad (founding Section 25 member) Larry what he was singing about on the 1980 single.

Floating Sun for me is the standout new track - it's light, spacious and fragile with a heartfelt vocal from Beth. At the back, Vincent produces a Hannettesq beat as Steve Stringer conjures up another commanding guitar line.

The show rounds off with the classic trio of The Process, Looking From A Hill Top and Dirty Disco. The first two are taken from the years-ahead-of-its-time From The Hip. Recorded with New Order's Bernard Sumner and released in 1984, these songs are timeless.

Beginning and ending with songs from Always Now, Dirty Disco ends the show and sees both band and audience dance the night away.

A Section 25 outing in Scotland is a rare thing and tonight's set was a brave one, challenging the audience with half an album's worth of new material being debuted for the first time. However, Section 25 pulled it off. We look forward to the new album and the continued success and acclaim it will bring such a unique band.

They play Newcastle Think Tank on April 7 before supporting The Railway Children at Lindon Borderline on May 12.