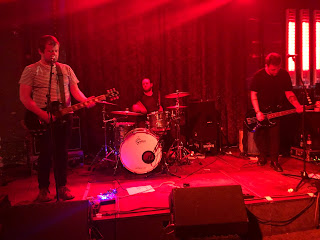 Ist Ist played their first show outside the UK with a nine-song set at Berlin's Rosi's club featuring tracks from their Spinning Rooms EP, old singles and a couple of new as-yet-unreleased tracks. Initially curious, the audience was won over as the set progressed.

Rosi's is the sort of place that you wouldn't find in England. In a reclaimed industrial area of East Berlin, it's a perfect party place, an open space in the yard with two indoor live or club spaces and a laid-back friendly atmosphere where everyone's cool and no one is out of place.

It's the ideal place for Ist Ist. Despite not fitting into any scene they've built themselves up from opening slots in the Northern Quarter to headlining the likes of Gorilla and The Ritz back home and spreading their wings across the UK. Refusing, and probably unable, to cow tow to the fashion for colourful shirts and big hair cuts, their weapons of song are darker and more blunt, appealing to those who demand something different.

A German shouting Joy Division at them after the first song gets a curt "fuck off" from Adam, but delivered with a grin that had the guy laughing with them completely unoffended. He tells us "Guten Abend wir sind Ist Ist aus Manchester" before checking it's OK and then Andy tells us about missing his flight and having to travel via Frankfurt. At the end as the crowd shout for them to play more, Adam leaves us with the announcement that they're available for children's birthday parties. It's that ability to resonate with an audience in their own way and break down walls despite the darkness of some of their songs that makes Ist Ist unique.

Tonight, they're even more raw and back-to-basics given you can't bring a full set up on an Easy Jet or a Lufthansa flight and it makes the live experience more battering and bruising. They've dispensed with many of the two and half minute explosive blasts that they announced themselves with a couple of years back and with the likes of I'm Not Here and Diversion from the EP and the two new songs Son Is The Father and Exist they still possess that ability to blast away at an audience's defences and leave them exposed to the sonic cacophony that they're creating. 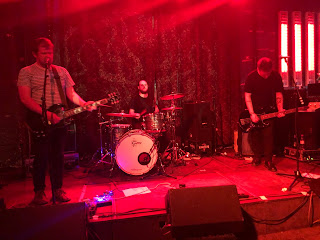 The sound is perfect for them, you can hear every single metallic beat of Joel's precise drumming that dictates the pace of these songs, the subtle basslines that suddenly twist and turn a song and take it down a different dark alleyway and the violent expression of Adam's vocals. The initially reticent crowd move forward, some start to dance and the cheers get louder at the end of every song. The likes of Silence, Strangers and Emily, as punishing and bruising as they are, particularly Adam's menacing growl on the latter, still have moments that you could imagine transporting them from a sweltering Berlin club to a huge hall as the choruses kick in with lifts the weight of which a three-piece with no sonic trickery shouldn't be able to achieve.

Exist is a brilliant song that drives forward under its own unstoppable momentum, with Joel's drums at its very heartbeat, whilst the older songs that have stuck in the set, Night's Arm in particular, are now a much more complex spiralling beast than they were at birth. They leave us with Diversion, and despite the calls for more, it's practically impossible to follow it. And that's Ist Ist in a nutshell, a band built in its own way, ploughing its own path, obliterating anything standing in their way. You'll either love them for their belligerence or loathe them for a perceived arrogance, because being "alright" is about the worst thing you could ever say about a band.