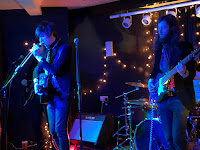 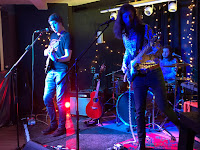 Carousel Clouds launched their Tales Of Coincidence album with an intimate show in the Peer Hat basement in Manchester on Tuesday night. An eight-song set transformed the songs from CD to the live environment and also included a new song written since the album's completion. Support came from the last-minute stand-in The Mantells.

The Mantells only joined the bill for the show about lunchtime. They've not played together this year, joking their last discussion was what Christmas song to play, but with Dale from the band now in Carousel Clouds, they step in to save the day after Abbie Ozard pulled out ill. They have to decide their setlist as they go along, but they manage to pull it off remarkably well once they agree which song to play next. The highlight is their single Going Dancing from last year. Given the short notice nature of the set, it's an impressive performance, the unpreparedness adding a little bit of unpredictability to it.

The beauty in Carousel Clouds' music is the way they almost effortlessly sweep you off your feet. Songs that are happy to mellowly seduce you with an acoustic guitar suddenly lift you up and carry you along on the weight of their melodic guitar and soaring rhythms. It's a trick they pull off on the likes of Torment, Grace (Look No Further) and The Greatest Noise, whilst a brand new song called Skin And Bones, that they joke will be on their next album sometime in the 2020s, probably does it more than the others, especially when Dale uses his pedal board to create magical noise.  This is music made for music's sake, not for ego, certainly not for money, but for the love of creating art to share with others. 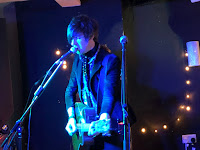 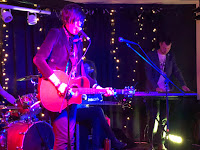 The fact that these songs are on first listen so free of pretence makes them even more potent. There's no big show-off moments, Neil is an unassuming front man, when he starts to sing you listen, drawn in by the heartfelt warm emotions of the song and the way his voice emphasizes just the right bit to grab you. This translates to the live stage as much as it does on record despite the absence of Tamsin's vocals tonight. The rest of the band - Dickon on guitar, Matt on drums, Dale on bass and Jan on keyboards - are the perfect foil, their control of the pace and the intensity of the songs matching Neil to a tee. They finish fittingly on Fortune Quarter, the closing track on the album, which ends in a swirling gentle cacophony of distortion from the guitar pedals as Neil departs the stage. Whilst album launches can often be showy and spectacular in intent, this one fitted the mood of the record perfectly - affecting, understated and heartwarming, and that makes it somewhat unique in these harsh times.

The album is available to preorder via Bandcamp.

Email ThisBlogThis!Share to TwitterShare to FacebookShare to Pinterest
Labels: Carousel Clouds, The Mantells