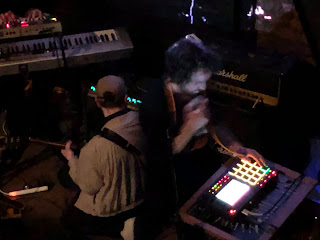 SOFIAHH brought their intense live experience to the intimate surroundings of the Eagle Inn on Saturday night and left us questioning whether we'd see them ever again at the end of the set. Support came from Tremors and Lynchs.

Lynchs have been growing their reputation very quickly and the room is as packed for them as it is for anyone else on the night. They've got a certain arrogance to them, or at least it comes across that way, in that they're sure of what they're doing and what response they'll get. They start with latest single Think Responsibly and finish with their only other released track Waxwing. They neatly bookmark a set that's brimming with anger that's focused and directed. Their singer wears a white t-shirt with what looks like two gaffer-tape crosses on the nipple area - no one knows what it means, and he doesn't say, but it feels like it's making a statement, as do the songs that are expressed powerfully. We're particularly impressed by one song mid-set that "has no name, so we can't give it to you" and one that they're about to go into the studio and record. They're certainly a band to watch out for. 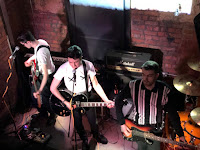 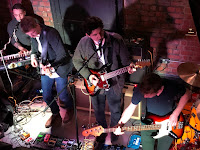 Next up are Tremors who've been around the Manchester scene for a couple of years now. Having missed them a couple of times since we first saw in 2016, most recently when they supported Neon Waltz, we're keen to see what they've been up to. They've fleshed out their sound on songs like Crystalline and Go Steady from their recent EP and they've got a whole gamut of influences and styles running through their set. They've definitely still got the anthemic tendencies we noted back then that shows ambition to play beyond venues of this size and there's a passion in their eyes and in their playing that shows belief in what they're doing, even if they lack the edginess of the other two bands on the bill.

SOFIAHH for those that don't know formed out of Hartheim after the tragic death of Gaz Devreede in 2015. It's taken a while for the rest of the band to reform understandably, and front man Mike makes reference to one song being about "a guy who would have been on stage with us" as he introduced it and you can sense the pain they still feel. When he tells us before they finish the set with "the most beautiful song ever and it's not one we wrote" and they deliver a wild version of Bjork's Hyperballad that takes the original and leaves little other than the mesmeric feeling when it finishes still standing, he precedes it by telling us that this is the end for the band. 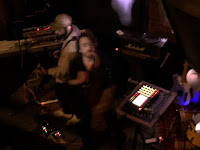 Before that revelation SOFIAHH deliver a set that isn't for the faint-hearted. With stark visuals cast onto the brick wall behind them accompanying the songs, they draw you in and spit you out with the intensity of songs that build, that defy traditional song structures, leaving you unsure of what is going to happen in the next fifteen seconds and what position Mike is going to assume. With drums, keys, guitars and other effects colliding together as Mike declares solemnly "we can't go back to that place" early in the set as the visuals flash a huge crowd of people, it's impossible not to be drawn in. Taut and tense, their recent single The Knots takes us on a journey that leaves us battered and bruised. There's a dark sense of humour too, a song being introduced as being about "toxic masculinity" then has Mike commenting dryly on the "nibbles table" that's holding one of their boxes of magic tricks.

If this is to be the end of SOFIAHH so soon, it'll leave us with a sense that their journey was only just about to start and that they'll be departing with many roads unchartered and unexplored as both them and Hartheim before them were not prepared to play by any conventional rules.