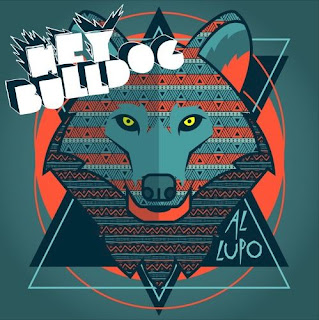 With the imminent release of a new single Al Lupo (April 20) and a headline show at Night People in Manchester this Friday (13), we caught up with Hey Bulldog's front man Rob Manton for a chat about the single and the Italian connection, their new material and plans for the rest of the year.

It’s been a year or so since we spoke, what’s been going on in the world of Hey Bulldog?

It’s been a mixture of gigging, writing, recording.

Playing our first European gigs was great last summer we always really enjoy playing on the bigger stages, we’ve got new songs that we’re still developing and the first couple of months of the year we’ve been playing some really good gigs building up to the new single release.

You’ve got a new single out on April 20th called Al Lupo, could you tell us a little about the song please and why the title of the song is in Italian?

We were playing a festival in Sicily in August so ‘In Bocca Al Lupo’ (Into the mouth of the wolf) was a phrase people would say to us as performers meaning good luck, the music for the song came from the very first jam we had when we got back from the trip, so the energy of the music and the metaphor of the saying seemed to fit perfectly to some up what that whole experience meant.

You’re also headlining Night People on April 13th. You’ve played a lot of support slots recently. Does it feel good to be doing a headliner of your own?

Yeah we love playing support slots with good bands, people like The Lucid Dream, Sextile and The Schizophonics but with the single coming out we wanted to do something a bit more focused on us, so we put together the lineup with The Empty Room guys at Night People in Manchester and got some great bands like Deja Vega and Freakout Honey to play with us.

Will you be playing new songs?

Yeah it will be nice to be playing a little longer so it gives us chance play a couple more songs, we’ll playing a new one and doing something else we haven't done for awhile....

Having the keyboard now has definitely opened up a new creative door into what we can do as a three piece, so it will probably appear in more songs, No future (part ii) does seem to have become a live favourite too and with it being a mostly instrumental track it wasn’t something you would have naturally predicted, so I’m sure the seeds of the song will take root in other things we do.

We’re always looking to develop and keep our own identity, there’s so many bands that just sound exactly the same or pale comparisons of their one or two main influences.

Originally part of the reason for naming the band after a Beatles track was to be in a band that was capable of doing a wide range of really good songs and taking different directions in a natural progression.

What have you got in the pipeline for the rest of 2018?

We’ve got some exciting festivals and bigger support slots coming up for the summer, another single release with some more headline shows. We’re talking to labels so possibly doing a full album would be nice too!