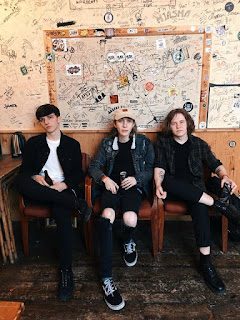 At last year’s When In Manchester festival, I came across a band called Sapho for the very first time. If you saw them on the street, you would just think they were a young group of friends, there’s certainly nothing ostentatious or obvious about them, but on stage, they come alive in very powerful way. Only a simple three-piece, Sapho are school friends from St. Helens, and relatively new on the Rock scene. Having done their very first interview last year, I wanted to catch up with them a year on, to see what was new, what their plans were and how their performance compared to this time last year.

Watching their set in a bigger venue than the previous year, I was pleased and proud to see a bigger, more engaged audience, and a much more confident and engaging rapport with the crowd from frontman Liam Abbott. As I turned to see who was watching them, I saw several people clapping and dancing and was delighted to see such a fantastic response toward a band who had clearly grown and developed since their fifth gig, when I met them back in 2017.

After their performance, we congregated in an upstairs room in Gullivers and had a chat. I wanted to discuss how far they’d come, the fact they’d extended their set, and their enhanced performance style. About how they choose which songs to put in their set, Liam told me this: “We’re really picky with what songs we put in”. “Some of them don’t get over the hill”, furthered bassist, Brad. Although, interestingly, and perhaps demonstrating how skilled they are as musicians, drummer Luke went on to say, “The majority of our songs, we learn very quick, which is weird”.

From what they told me, it seems as though the Sapho lads are keen to showcase only their very best material, and I think in doing so, and adding perhaps only a song or two more at a time, slowly, they are able to keep interest without compromising any artistic integrity. Whether they realise it or not, I think this is a very clever move. The quality of the songs they do have is evident in their performance and certain things make them stand out: “ We do like long intros” Liam said, “We like to mess about a bit {with a song} “We enjoy it, if there’s a good outro” he added. “A lot of the songs we listen to have mad outros” Brad told me, and it is clear that this rock influence has inspired Sapho’s back catalogue. Certainly, from an audience point of view, they appreciate these elements too; they seem entirely an integral part of the songs and not in any way for effect or anything else.

Within the last year, Sapho have had great success as support for The Clone Roses, playing their biggest gig to date in front of around seven hundred people. “They’re really nice guys, they’re brilliant” Brad said of the experience, and seemingly they were well received too: “In the crowd, people told us they really loved it, we’ve never really had that, yet” he went on to say. There’s so much to love about Sapho. Not only do they put out high quality music, but they’re so unassuming and almost seem unaware of how good they are.

This summer, Sapho have some free time coming up and the plan is to record and hopefully release a single. “We wanna put all the work into singles, and an EP further down the line” Liam explained. And beyond that, the band are just keen to get gigging anywhere they can. I think what’s refreshing about this group of friends, is that they’re in it for the music, and the fun. Of their gigs Luke said “It’s a night out, innit and having fun”, which to me, speaks volumes of their attitude towards what they do: they simply enjoy it.

I asked them where they’d like to be, and I suggested would it be cool to enjoy a similar level of success such as fellow Indie band Blossoms, to which they replied: “To be fair, we did say we’d be happy if the biggest we got, was to support The Blinders” (Liam). And if they could gig anywhere with anyone? They’d support The Blinders at The Leadmill in Sheffield. Let’s hope 2019 is the year for that, but in any case, I feel sure that this won’t be the last we hear of Sapho. I look forward to seeing what they do next, and catching up with them again in a year’s time to see how far they’ve come.

Email ThisBlogThis!Share to TwitterShare to FacebookShare to Pinterest
Labels: Sapho