TRACKS OF THE DAY : Ethan And The Reformation - Fractaline Fantasies / Broken Guitar 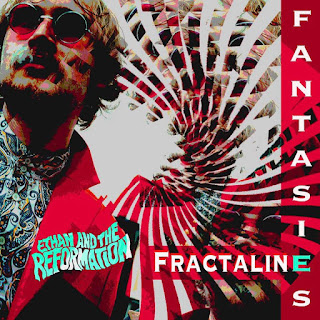 When guitarist Mick Mac of Ethan and The Reformation got in touch with me, asking for a single review of his band’s latest release, I didn’t hesitate. Seemingly, having read a recent blogpost I had written, reminiscing about when I met and interviewed him and the rest of his bandmates a year ago, it prompted him to release a single after a period of inactivity. To say I was delighted is an understatement. And of the songs? They’re stunning. Hearing them now, after having heard them performed a year ago, brought back all the memories of the first time I heard them perform live, and the powerful and confident performance they achieved.

Released on 28th April, is the single Fractaline Fantasies, along with B side, Broken Guitar. The single itself is a slow, melodic number, with its roots in 60s psychedelia, but with a modern, contemporary edge. The track’s intro sounds like an alarm, cleverly engaging the listener and grabbing their attention in a unique way. What follows is a catchy, tuneful riff before Ethan’s trademark vocals commence. It’s deep, bassy, with a lovely tuneful instrumental and harmonic vocal section. The song is downbeat, wistful, and listening to it is like floating along on a beautiful cloud: just like summer. It’s hard not to be seduced by the dream like pace and melody, and in parts reminds me of slower Soundgarden or Pearl Jam track. Although comparisons to other bands can be made with this song, and the nod to the 60s is evident, Ethan and The Reformation are truly their own band, having crafted their own sound, and creating compelling, melodic songs that leave the listener wanting more. Fractaline Fantasies is no exception.

B side Broken Guitar was always a favourite of mine to see performed live, and it makes the perfect track to release alongside the former. It’s an extremely poignant song, and all the more beautiful for that. This song has the ability to reach out and touch people, by expressing such depth of feeling and emotion, and making it so relatable. This is what sets this song apart for me, from their other tracks; it’s their ballad. As the song begins, it has a different sound to the band’s other numbers, being of a more country style. It’s an ode to being broken and has a very melancholic feel to it. It’s about reaching out to someone who is desperate. It’s hard not to fall in love with this song. It has irresistible melodies, and is stripped down in the first half, allowing each verse to be heard, and the song’s message to be absorbed. Halfway through, it changes key, pace, adds bass, percussion, and keys, loses the vocals and becomes much more uplifting.

I would urge anyone reading this to give these songs a listen. This band is something very special, and this latest single release, showcases the range, depth and quality of their repertoire and talent as musicians.