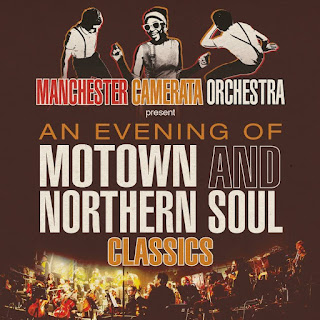 Over the past few years, orchestral tours by bands have become a commonplace occurrence. Manchester's experimental Camerata orchestra and celebrated composer Joe Duddell came up with a different idea - to recreate the magic of Motown and Northern Soul with an orchestra and live band in a seated venue. Manchester's Bridgewater Hall was the setting as they attempted to recreate the magic of Motown, Wigan Casino and The Twisted Wheel in more lavish surroundings.

To deliver this ambitious task the Camerata recruited Joe who then put together a house band made up of familiar names on the Manchester music scene including Larry Gott of James, Nathan Sudders of The Whip, Pete Marshall of Paul Heaton and Jacqui Abbott's band as well as Peter Mitchell and Dave Maric and he arranged the huge thirty song performance over two sets and an encore. Vocals were provided by five guest vocalists - each bringing their own style and delivery to the show. Beth Macari, Sharlene Hector, Paul Stuart Davies, Wayne Ellington and Dominic Lawson allowed the song selection to be broad, either singing individually, or with one taking the lead and a combination of the others providing backing vocals or harmonies to recreate the original vocals as closely as possible for most of the evening.

To set the tone for the performance in the main hall, there was an hour of Northern Soul DJs in the upstairs foyer to get people in the mood, either for a dance or simply to soak in some of the classic tunes of the two genres. Whilst the majority may have been around in their heyday and were here to see how the music that defined their youth would be translated boldly into a classical offering, it's also refreshing to see many who wouldn't have been born at the time. One of the key objectives of this event would be to ensure that the legacy of the times were refreshed and instilled in the minds of younger people. 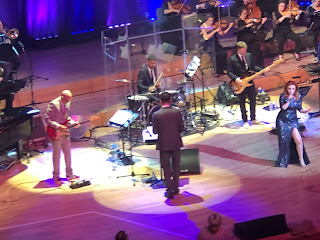 Back in the main hall, the challenging task of ensuring that the right balance between orchestra and band was met head on, not an easy task with piano, brass and strings competing with live drums, guitar and bass for space, but the Bridgewater's sound allowed the requisite separation so that the nuances could be heard without the songs having to be disassembled and made unrecognisable from the originals. The set was also kept fresh by rotating the lead vocalists throughout allowing Sharlene's infectious energy on the likes of What! and You Don't Know Where Your Interest Lies to run next to Beth's stunning command of some of the most revered standards of the time, particularly Don't Lose Your Head and the three guys to deliver as if they were in the clubs of the time rather than in this more cavernous space, Paul's delivery of the Wigan Casino standard Long After Tonight Is All Over getting the front row up and dancing along with the four stage dancers who add to the visuals of the evening with some moves that had us wondering quite how they pulled them off.

The audience's reaction was interesting to observe. It felt mixed between wanting to get up and dance, and the Bridgewater's usually strict policies on such matters was relaxed for the evening, but it felt like many didn't know whether to get up and dance or to sit and observe and soak in or were simply too polite to risk upsetting those around them. It meant a slightly muted response during the songs, although the applause at the end of them told its own story, until towards the end when Sharlene encouraged them to get up and move around.

It'll be interesting to see how this works in the summer when this is being performed to a completely different audience altogether at the Neighbourhood Festival in Warrington and what the reaction will be. Whilst songs that will be more familiar to that crowd - such as Tainted Love, You Keep Me Hangin' On and Stop In The Name Of Love are likely to get a bigger reaction than the likes of Heatwave and There's A Ghost In My House, the knowledgeable crowd tonight seemed more keen on the latter.

During one of the few audience to crowd interactions, Sharlene also seemed to indicate that there might be a tour of the show as well. It'd be a shame to confine such an invigorating set that's clearly been intently thought out and with a cast of performers who can do such legendary songs justice to one or two shows. Whilst those who can remember the halcyon days of Northern Soul clubs and Motown's heyday might still talk with reverence about those days like my generation does about the Hacienda, it's important that this wonderful music doesn't get lost in the more disposable approach to music that downloads and the demise of physical formats have brought.

Set 1 – Landslide, What, You Don’t Know Where Your Interest Lies, Ain’t Too Proud To Beg, Tracks Of My Tears, I’m On My Way, There’s A Ghost In My House, My Girl, I Need You, Dancing In The Street, I Never Loved Her Anyway, You Keep Me Hangin’ On, Stop In The Name Of Love, I Heard It Through The Grapevine, Reach Out (I’ll Be There)

Set 2 – Turnin’ My Heartbeat Up, You Didn’t Say A Word, Tainted Love, This Old Heart Of Mine, Heatwave, Better Use Your Head, Out On The Floor, If That’s What You Wanted, Long After Tonight Is All Over, Time Will Pass You By, ‘Cause You’re Mine, Do I Love You (Indeed I Do)

Encore – Ain’t No Mountain High Enough, You’re All I Need To Get By, What Becomes Of The Broken Hearted