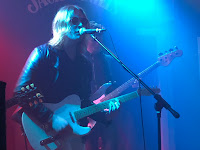 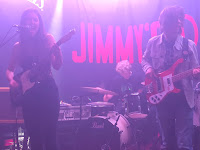 Rory Wynne launched his self-titled debut album which launched at midnight with an intimate show at Jimmy's in Manchester, performing the album in full as well as his What Would Rory Wynne Do? and three other tracks. Support came from the mysterious The Mysterines.

"Who are The Mysterines?" proclaims the banner on their brand new Facebook page. It's a good question as no-one clearly did know as by the time they take the stage we're the only people at the front of the room, such is the power of social media these days in discovering bands. That's all about to change as they've just been announced to support Miles Kane on his upcoming tour.

Within half an hour though we know all about them. Rarely has a new band that we know nothing about made such an impression. They already have a set crammed full and overflowing with bittersweet reflections on love and life, tainted with anger and uncertainly, cleverly observed and delivered with a power and punch that is going to stand them in great stead. In Lia, they've got a front woman and guitarist who's set to shatter and smash glass ceilings, whilst George and Chrissy provide a tight, focused and powerful rhythm section that belies their age.

Bet Your Pretty Face rages at the open doors that men are greeted with compared to women and its delivery leaves you in no doubt that to argue will leave you bloodied and bruised. Their set closer Gasoline rages against someone who's wronged her, insistent and repetitive declarations of hate before the showstopping "I love you" as the song stops dead at the end. Before that the likes of Take Control, PHD and Resistance already feel like they're fully-formed anthems for the teenagers of today.  The Mysterines are going to be a very very very big deal. 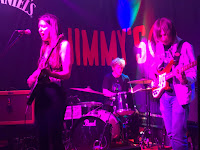 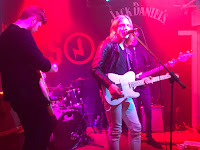 The lights of Jimmy's are dimmed and a searching spotlight scans the room as Rory's band and the rest of us await his arrival. He strolls onto stage, shades over his eyes, swigs from a bottle of wine and picks up his guitar as the familiar tones of Star In The Sky from the EP echo around the room. It's followed by another EP track In The Dark before he announces he's going to play the album in full.

It's clear that he's not content to just repeat the album parrot-fashion. The songs have been worked on to make them fit into the live environment and on the whole they sound harder and fleshed out than the brighter and shinier versions on the record. What that doesn't dim though is the quality and immediacy of most of them, the initially reticent crowd being drawn forward slowly to get involved with songs they'd not heard before other than the two taster tracks Friends and Little Miss Edgy.

As the set progresses you can feel the confidence on stage blossoming and everyone in the room relaxing as the songs from the album start to flow, each one feeling like a single in their own right. Let's Have A Party, Enigma and Little Miss Edgy are the three that push their way to the front of the queue in the crowd's response, busting their way through the audience's curiosity and getting the front row moving. And, like on the record, the sequencing of them feels spot on.

Once the album's done, we get a couple of new songs - Need You Tonight and Mistake Me For A Stranger - that feel like they'd fit on an extended version of the album before he completes the set of songs from the EP with After Me and Tell Me Now. Many bands at Rory's stage of his career would still be resting on the laurels of their first two or three tracks they put out, but the likes of Post-Party Confusion and I Know She Knows have already been condemned to a life on people's iPhones with no room for them in the set. He does though finish with Why Don't You, a song that's basically too good to simply leave on the shelf.

Rory Wynne is now out there in the wild, waiting for people to hear it. We're still surprised and a little shocked that it's being launched in such modest surroundings, such is the strength of these songs and the ones that have preceded them. Hopefully it's simply a case of being a slow burner and we'll hear these ringing around the city's bigger venues and further afield, because to us the mystery still remains why the plaudits being thrown at others aren’t being directed towards him.

Email ThisBlogThis!Share to TwitterShare to FacebookShare to Pinterest
Labels: Rory Wynne, The Mysterines