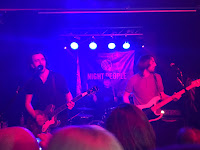 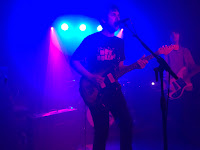 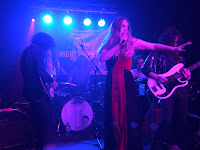 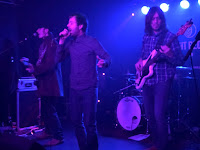 Hey Bulldog launched their Al Lupo single with a band-packed evening at Manchester's Night People last night. Supported by Savannah, Freakout Honey and Déjà Vega, they celebrated their latest release with a forty-minute set that allowed them room to play tracks not usually aired and demonstrate why they're one of the most technically proficient bands in town.

Savannah open up proceedings, the Telford band's Facebook profile declaring them "a PROPER rock and roll band" and it's capitalised for a reason. Savannah trade in big anthemic songs that match that description like No Goodbyes and Head Above The Water which  are new tracks. Their next single Family Man is the highlight of the set, which concludes with the sprawling Number 9 which starts with Liam declaring "this is music" a la Richard Ashcroft. Whilst their hopes of leading "a British musical revolution" might be fanciful, they know how to write and deliver songs that pack a meaty punch and they'll certainly be flying the flag with gusto. 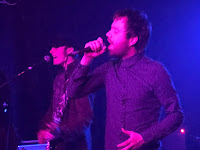 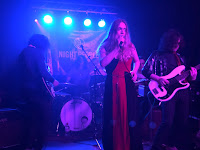 Next up are Freakout Honey, a band that's undergone several revolutions in their time. Once they were a dark introverted collective, now they shine like glitterballs through the dark, invoking the psychedelic spirit of Haight-Asbury and imbuing it with a Mancunian rain-drenched shimmer. On tracks like Steady As She Goes, Paris lends a touch of dramatic impact to the proceedings, the range of her voice moving from pop diva to deep soul without seeming to break sweat whilst her band mates coolly continue about their business. So Far is the stand out track with a more dense claustrophobic build to it before they finish with a wonderful darting instrumental that they demand people dance to.

You have to be brave to invite Déjà Vega to support you, because they're the most powerful unstoppable force of nature playing on this scene right now. Unperturbed by issues releasing their debut album, it feels like they've just exhaling all that spent up aggression every time they walk on stage. There isn't much to some of these songs, just drums, bass, guitar and voice, but the way they amplify everything and deliver with an intensity that's uncomfortably violating in nature, makes them exhilarating.

The most unlikely earworm of Mr Powder's riff, played with both hands on the body of the guitar rather than one on the neck, the pent-up explosive torrents of Telephone Thing and Pentagrams plus another untitled new song set the crowd, fairly placid up to now, to dancing about to the chaotic angular rhythm. They finish, as always, with The Test, a song that grows a life of its own each time, mutating into something improvised, unpredictable and seemingly always on the edge. Jack ends up amongst us, then twists his voice through his pedals, before leaping back into the crowd with his guitar this time as Mike and Tom continue almost oblivious. There isn't a band around town at the moment that set the pulses racing like Déjà Vega right now. 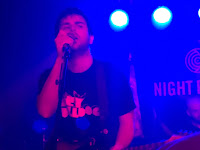 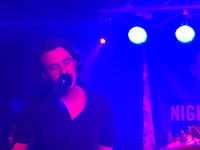 Hey Bulldog have the sense not to take them at their own game, and they have no need to as they've aced their own particular take on how you can push the boundaries of what you can do as a three-piece. Across their eight song set they display a musicianship that stands them apart; songs that are perfectly crafted and structured and delivered with a style and panache that's so precise and targeted that you can't fail to be impressed. They also do it without it feeling cold and calculated and excluding their audience.

The likes of Under The Spell, Find The Sun and their new single Al Lupo draw the listeners in and don't let them go, whether it be the moments that Rob and Matt lose themselves in what they're doing or their voices combine, complementing each other to lift the song, or the intense rhythms and canvas that Ben's drums provide the songs. No Future Part 2 hints at a different more electronic keyboard driven outlook for them without relinquishing what has got them to this point where they can pack this room. They finish on Divide And Conquer but the audience aren't going to let them go that easy, particularly as this is their first Manchester headline show for a while and they've got longer than their usual half hour slot, and they treat us to Numb, which ends up being the highlight of their set.

Hey Bulldog's official site can be found here and they are on Facebook and Twitter.  Read our interview with them and listen to new single Al Lupo here.