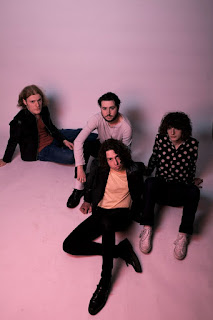 When I saw that Stockport-based four-piece, Kashmere, were playing a gig in my hometown of Leeds, I didn’t hesitate in going along to see them. Having watched them perform an electric, sell-out show at The Deaf Institute in Manchester just two months prior, I was keen to ask them all about the evident progress they had made in just one year, since I had first come across them playing at popular gig venue Jimmy’s, in The Northern Quarter of the same town.

The Lending Room show in Leeds was brilliant. Not a note out of place, each band member maintained impeccable timing throughout, but more importantly played with an exciting confidence and infectious sound which showcased their ability as band to really own their gig. Joey successfully enticed the audience forward and the band as whole engaged the crowd right through to the crescendo of the final song, which was fantastic to see and be a part of. After the gig, we congregated outside and over a drink and a cigarette, started our chat.

I wanted to find out with just one more show left, how the rest of the tour had gone. “London was mint”, Joey told me, “We played London back in September last year to about 15 people when it was quite a static crowd and played this time to about 50 people who knew the words and were dancing; most of the tour has been like that” he went on to say. “London was probably the crowd that was the most up for it, up to now” Charlie furthered, “Apart from tonight really” he added. To me, this is a very exciting sign of things to come: London is a hard crowd to please for any Northern band so the fact that they are enticing audiences so far removed from the Manchester scene is very promising, indeed.

My next question was aimed at finding out what had caused the hugely positive change in the band’s performance. I couldn’t help but compare the difference in Joey as a frontman from back in May 2017 to now, in which he has gained an apparent effortless ability to intoxicate the crowd, performing with confidence, style and charisma. “I think we’ve found our sound now” Joey explained, “We’ve got belief in our own set, the songs are better, and we plan it to be like a proper show: we’ve established the sound”.

Of their recent sold-out Deaf Institute performance, Joey had this to say: “We knew going into it, it was gonna be a special gig, just cause it had sold out”. “It was quite a step for us” offered Charlie, and the band are confident of another successful hometown gig on Saturday 28th April at Night People. However, they’re not overly concerned if it doesn’t entirely sell out, as Charlie put it: “People get too caught up on sell-outs, as long as people are having a good time, who’s arsed?” And Andy added “And as long as we’re having a good time too”. “We’re in this band, cos we love doing it” Charlie went on to say, “We’d have it in front of two people or two thousand people”.

Kashmere’s first single ‘Blow Your Mind’ came out back in 2016 but the band have been together since 2014. Today, Joey Newey and Andy Law are the only two original members. Andy went on to explain a bit a about the band’s history: “Me and Joey have been in bands for the past ten years, and we started Kashmere at the end of 2014”. “We were a completely different line-up and were a five-piece back then. In 2015 we started gigging and recorded a few demos, built up a fan base, gigged all over the country and then in 2016, we got Charlie on board, which was a big step up, then 2017 we got Freddie on board which was another step up”.

Freddie stepped in to replace bass player Dave Pennington, and interestingly, it was almost by accident. “We all went to a party hosted by some friends near where I live, and it was a fancy- dress thing”, Freddie explained. “I was unsure about going but went with some of my friends. A girl I know was speaking to me, saying that Kashmere needed a bass player, just as I was in a bit of a rut, musically, so she introduced us”. Ironically, the band weren’t going to go the party either, so it was definitely a case of both parties being in the right place at the right time and timing, being everything.

I asked the band about their latest single ‘Tokyo’ which dropped at the start of the month and found out that it isn’t actually about Tokyo at all. “Our old guitarist Jack and I used to say we’d love to have a song called Tokyo”, Joey told me. “When I started writing what became Tokyo, the lyric just fitted in perfectly. The theme of the song is about having been to a perfect place, and nothing else looking as good as it, so Tokyo is just used as a metaphor for that” he divulged further. The song does feel quite oriental, as the band all stated, which led me to ask them a bit more about their overall sound as a whole.

Kashmere describe themselves as ‘Indie doom’ but if I had to put them into my own words, I’d say they’re like the dark side to fellow Stockport contemporary band, Blossoms. The difference being however, in the two bands’ instrumentation. “Our guitars are very clear, we’ve still got a lot of synth, but Blossoms have got a hell of a lot of synth; their leads and hooks are done on synth, whereas ours are guitar, backed up by synth so it’s kind of the other way”, Charlie told me of the difference between the two. “We’re still a synthy pop band, but we’ve got a lot of grit” added Andy. “Andy and I are from bands where we’ve got a lot of metal influence, and we’re just trying to build that stadium sound” Joey went on to say. “We’ve got those kinda synthy indie bits, but it’s backed up by straight-up rock guitar” he told me. It’s clear that a lot of thought has gone in to honing and refining their sound and as a band they have crafted meticulously, exactly how they want it to be.

One thing became very clear to me as I chatted to Kashmere: they’re very driven and ambitious, but nonetheless down-to-earth, grounded and with a very realistic understanding of their industry and how it works, as well as the steps required to achieve their goals. One thing is evident right now though, there’s a big buzz around the band, and they seem to be naturally outgrowing the smaller venues that they play.

“Recently at the gigs we’ve been playing, quite of lot have people have come up to us afterwards and said that we’re bringing a stadium sound to venues that shouldn’t be able to sound like that” Joey explained. “Our support band in Glasgow were absolutely raving about it, that we were bringing such a massive sound to tiny basement venues” he went on to say. “Even tonight, the place was shaking” added Charlie. And he wasn’t wrong. I was dancing down the front and sure enough, a girl turned to me and said exactly what others are saying to Kashmere: that the band should be playing in bigger venues.

Whilst discussing what might be next for them, I was keen to find out what they thought about getting signed to a label, as it seems so much harder now, than say twenty years ago. “It’s all about getting the right deal at the right time” Charlie started to say, “You can get signed for one single, then get dropped, so it’s got to be right” he went on to explain. “It is timing”, Andy continued, “If you release an album through a record label, it’s got to surrounded by a big, ascending hype otherwise it can just flop”.

Certainly, while they would like to get signed at some point, they recognise that it’s not the be all and end all, and they are all very clued up and informed on how things work and are very committed to their music and honing their songs. They’re not after a quick fix, they’re in this for the long haul: “We’ve just gotta pace it all out, we know we’re not gonna be one of these bands that everyone’s gonna jump on within two seconds, we’re a band that’s growing slowly, and if you look at other bands that have done that, they’ve then gone on to be the biggest bands in the world” said Charlie.

I came away from our chat with an unshakeable feeling of excitement. It certainly seems that the band have slowly but surely been gathering pace and momentum since the off, tweaking their songs, playing to bigger crowds and gaining a steady following in the process. As I interviewed them, everything they were telling me sounded tremendously promising. I most definitely believe this is band well and truly on the up. Watch this space: Kashmere are coming to a stadium near you, soon.

Email ThisBlogThis!Share to TwitterShare to FacebookShare to Pinterest
Labels: Kashmere