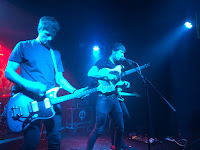 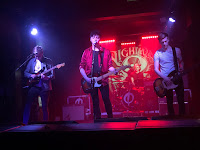 In between their UK and European dates with Editors, October Drift finished off a short run of shows of their own with a packed out show at the Night And Day Cafe in Manchester on Thursday night with a set including their recent single All Broken Down, some old favourites and a cover of one of the city's favourite sons.

The Blackpool four-piece Jekyll open up proceedings and there’s already a sizeable crowd gathered for their set. They’re slowly building a strong reputation on the live scene with performances like this and they get a great reception from an audience that connect with the likes of Mania and Othello as well as a new song with a working title of Bran Flakes.

Visually they’re starting to match the ambitious scale of their music which is aimed for rooms bigger than this one. Widescreen expansive verses build into huge choruses without forgetting to give the songs space to breathe. In Joel they’ve got a commanding front man, more so every time we see them, and behind him, Lewis, Liam and Mike also look and sound the part. They might be slow burners, having been around for a few years now, but Jekyll are still moving forward, developing their craft and their fanbase and tonight will have done them no harm at all. 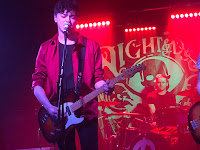 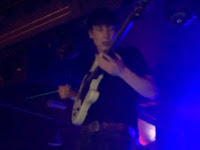 October Drift are riding high on a wave at the moment. This mini tour is sandwiched between dates on Editors’ UK album preview shows, including the cathedral round the corner a few weeks back which will have helped to swell tonight’s packed attendance, and the European tour which starts at the weekend. Add to that All Broken Down, their latest single, which has started to knock down some of the walls that get put up for bands of their genre that aren’t in the first flushes of youth.

That said, it’d be hard to put October Drift in a box and categorise them. They possess an energy and a live set that is powered by an insatiable energy and passion in what they do. They’re totally lost in the moment throughout their ten song set, Kiran ends up amongst for three of the songs, including making his way to the bar at the back and singing half of Lost stood on it looking back at the stage. Bassist Biz and guitarist Dan, in particular, throw themselves around the stage so much you wonder how they actually manage to play their instruments. Right at the back, it’s impossible to underplay the role of drummer Chris, adding backing vocals to Kiran’s breathless exclamations, whilst holding the chaos in front of him together and dictating the pace and power of the set.

All this visual excitement however means nothing if you don’t have the songs. One of the benefits of operating under the radar before starting to make your mark is the ability to build a robust set that doesn’t just focus on one or two key tracks and October Drift now have an arsenal at their disposal from the soaring opening of Cherry Red to the as yet unreleased anthem The Past that finishes the main set that means that the forty five minutes they’re on stage never gives the audience a moment of let up. The likes of Losing My Touch, which sees Kiran ill-advisedly trying to play his guitar using the underside of the speaker above the stage, and Cinnamon Girl have blossomed in time with the band into songs that the audience sing back word for word, drawn into the whirlpool they’ve created. 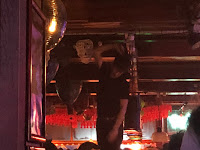 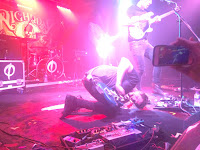 Even when things are slowed down at the start of the glorious Forever, October Drift have the audience exactly where they want them, agog at the sheer ferocity of the performance and the intoxicating intensity with which it’s delivered. They’ve always had that in them, but now it feels like they’ve got it in focus a lot more and it’s directed and targeted in a way that makes them a thousand times more powerful in their impact.

Infinitely polite, thanking us for choosing to come out and see them, there’s a sense as the roar dies down at the end of The Past and they nod to where they are with their own take on Joy Division’s Atmosphere, which they make sound like one of their own songs, that October Drift’s time is now. They sense the door is open and they’re about to kick it down.

October Drift played Cherry Red, Robots, Don't Give Up, Losing My Touch, Cinnamon Girl, Lost, All Broken Down, Forever, The Past and Atmosphere.