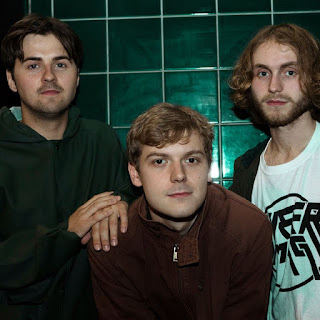 Ahead of their appearance at this weekend's When In Manchester, we caught up with one of the more local bands on the bill, Gardenback. They've built a strong reputation with some great live performances as well as a couple of singles over the last year or so. We had a chat about their past, their favourite gigs and their plans for the future.

Could you introduce Gardenback please and tell us a little about how you got together?

We're Ellis, Neil and Jacob James. We're been playing together since our teens in various bands, but since 2016 we're back together in Manchester and been releasing music as Gardenback.

The name is an interesting one, how did you land on that?

Ellis was reading a book about David Lynch and came across the word 'Gardenback', it was an unfinished project of his. We liked the word and struggled having an original thought.

What have been your highlights of being a band so far?

Our favourite gigs have probably been our Christmas ones, our last one we sold out Sacred Trinity Church and the time before we crammed The Castle Hotel. Last year we were lucky enough to play Cotton Clouds festival, it was amazing playing just down the road from home to such a huge audience, but really we love small sweaty intimate gigs and have had memorable nights at Manchester's smallest and finest venues.

It's been a few months now since your last single Bulldogs.  Do you have songs recorded and ready to go and when can we expect to hear them?

We've got a few songs recorded from earlier this year and are in the studio again imminently. You can expect within the next few months to hear something new.

You cover Talking Heads' Psycho Killer in your live set. What made you choose that song, it's pretty much a sacred cow in the eyes of many people?

For us, we were having fun with it during rehearsals and we're big Talking Heads fans. We like to throw in a cover as long as we enjoy playing it.

You're playing the When In Manchester festival at the weekend. Are you looking forward to be playing one of the most innovative and exciting small city festivals?

Yeah, we're really excited to be playing alongside so many great emerging bands. It's an amazing new festival and the team behind it have been brilliant. So we can't wait for a day out across Manchester's venues.

At the other end of the scale, you've also been announced on the Kendal Calling bill.  How does it feel to be among such illustrious company on the bill?

We're excited to see the big name acts, but they've done a great job with the smaller bands as well. We recently played with Deja Vega and Scarlet, they were both great live and we're excited to meet up again. Also bands like Pins, The Blinders and The Orielles, they've blown us away with their releases, we're really excited to see them play a festival set. We're also really excited to be playing the House Party stage, it's got a great history at the festival and again the line-up for it is superb.

We're really focused on our live shows, new releases and writing more. We're currently planning our first tour with Elephant Management for later in the year and hope to have a few more major announcements soon. We're incredibly excited for our Manchester dates this year as we're playing some of our favourite venues we haven't done before, but also can't wait to go further afield.

If you had to sell your band to someone who had never heard or seen you before, how would you set about it?

Music to soundtrack your disappointment.

Email ThisBlogThis!Share to TwitterShare to FacebookShare to Pinterest
Labels: Gardenback