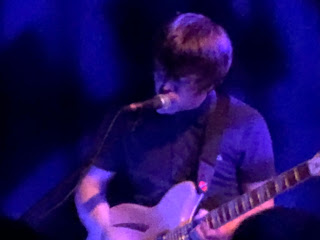 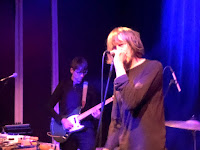 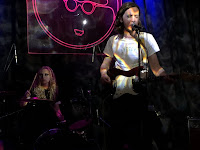 The Lucid Dream are one of the country's most challenging bands, operating under the radar with a dedicated fan base and a belligerent self-belief in what they're creating. With a fourth album almost ready to go with a radical evolution of their sound that extends boundaries and broadens the palette of their inspirations into an acid house inspired musical haze. As a preview of what's to come they've played two shows, at Dalston Victoria and their biggest headline show to date at Manchester's Band On The Wall. Support came from Three Dimensional Tanx and Pale Rider.

Pale Rider, with less than a dozen gigs to their name are causing quite a stir back in Liverpool and now further afield. We saw one of their first gigs last year with The Lucid Dream at the Shipping Forecast, but weren't quite prepared for what they'd become. Like a butterfly erupting from a chrysalis, they've grown wings and flown. Whether it be Ben's at times demonic at others messianic stage performance, Louis and Sophie's powerful, potent rhythm section that takes songs by the scruff of their neck and forces them down your throat or the way Fran delivers the killer blow to the dizzy listener with his guitar whether he be down on his knees or with the guitar raised above his head, Pale Rider take no prisoners and demand your submission. They don't say a great deal because quite frankly they don't need to. Debut single I Run On Rain feels like an opening summation when compared to some of the newer material they play. Moon, in particular, feels like the sound of a band still exploring their possibilities but bludgeoning anyone who gets in their path. 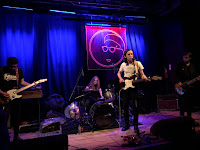 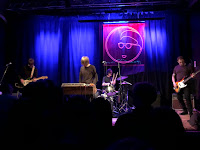 Three Dimension Tanx are up next and they're a band that don't play too often round here, so there's a small army of dedicated fans down the front who don't leave much room for the rest of us as arms flail, pints are spilled and chaos ensues. They're a band schooled in many of the finer traditions of bands of the city despite their own Lancaster bloodline. Shades of The Fall, keyboard sounds reminiscent of early Inspirals form the backbone to many of their songs, but unlike so many bands that stop there and end up being a competent pastiche, Three Dimensional Tanx take it and twist it and create something of their own, which explains the devotion of the guy who nearly takes our head off with his elbow. They blast their way through eleven songs in just over half an hour, from opening track Moonwrecker which is a decade and a half old to songs from a new album that they're planning for later in this year. They go down a storm with The Lucid Dream's crowd.

Much has been made, by the band themselves and then the reaction of the fans to the first single SX1000, of The Lucid Dream's new direction. Often such talk is just that, talk, but SX1000 on its own dismissed any such notion. Two other new songs Ardency and set opener Alone In Fear might not create the same furore that had the band tongue-in-cheek have "Psych Traitor" badges made, but they represent a band that's not afraid to take their blueprint, tear it up and piece it back together in a different order.

Songs might not be the right description for the likes of Bad Texan and the dozen or so minute trip of Epitaph from their previous album Compulsion Songs or Monalisa from their self-titled second album. Each one of them possesses as many ideas as most bands have on a whole album as they take a transfixed audience on a magical trip for an hour and a quarter. 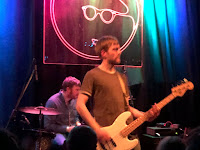 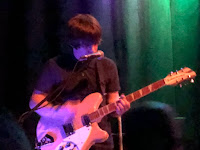 There's moments of dark acid house inspired instrumentation where they could be DJs rather than a band directing a seething mass of hedonism seekers down the front and sections of songs like I'm Like A Star In My Own Right where they employ a melodica to create a very different vibe altogether. What makes them so magical though is that the journey between two such extremes feels like a natural one, a gang of four revealing their creative spirit layer by layer.

By the end of the night, the several hundred that have packed out the Band On The Wall are reduced to one seething mass, intoxicated by what they're witnessing, something more resembling a warehouse rave with a live band than your traditional gig. They might look like any other four-piece band of lads, but the minute they start to play, there isn't a band even remotely approaching what The Lucid Dream are doing.