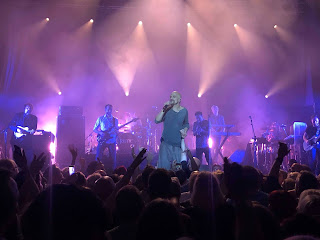 James' Better Than That tour continued into its second night with a first return to Warrington's Parr Hall since the band filmed a live concert of their then-unreleased Seven album. In front of a packed crowd, they recreated the feel of that with songs from their forthcoming Living In Extraordinary Times album, as well as revisiting both some of their biggest hits and some rarities pulled out of the deep rabbit hole of their extensive back catalogue. Support came from Newcastle's Lanterns On The Lake.

Lanterns On The Lake opened proceedings with a six-song set. Spread out in a line across the front of the stage, their performance is an assured confident one that goes down well with the growing crowd that’s filling up the building. Whether it’s the new material like the majestic drama of Every Atom or the likes of The Crawl and the title track from their last studio album Beings, there’s an intensity to their performance that the James crowd appreciate even if they’re not familiar with the band or their material.

Switching between keyboards and guitars, Hazel’s voice is wracked with the emotion of the words she’s singing, from softer, more gentle moments to the set’s conclusion when she’s fighting against the building maelstrom of sound as Paul uses his violin bow to stretch the boundaries of sounds from his guitar. You sense them growing in confidence from the night before and as the set progresses. 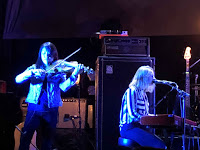 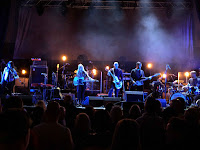 James kick off their set with Hank, drums kicking up out of the darkness with a pounding tribal beat. As the song starts the stage is lit in alternating red and white lights which adds to the staccato feel of the song. For those wondering what Living In Extraordinary Times is going to sound like, it’s the perfect opening gambit. It’s James, but not quite as you know them. It’s followed by Coming Home Pt 2, which Tim tells us is about his son, and it possesses one of those trademark earworm choruses that the band have produced so many of over the years. It’s clear tonight, at least where we’re stood, that the thousand or so crammed into the Parr Hall’s intimate space, are here to celebrate both the old and new James.

Gone Baby Gone is a slightly left-field selection, one of the last songs from La Petite Mort to be played live, but one that’s burrowed its way into the band’s thinking. Jagged, angular and punchy, it’s perfect for the strobes that light the stage and for Tim to lose himself in the music. With newcomer Debbie adding further percussion, it sounds harder, faster and more potent than it’s ever done. Moving On follows, a clear sign that James are intent on mixing the older (as in not new album) material around significantly. Soaring, heartfelt and poignant, it tells the truth to the lie that post-reformation James can’t produce something that impacts people’s lives and connects in the way the likes of Ring The Bells, which follows it, did for so many. The magical thing about Bells is the way it never feels old and tired, it doesn’t need reinvention or the type of surgery that the likes of How Was It For You did, yet they’re still pushing the boundaries of where the song takes them and the audience. 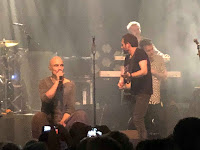 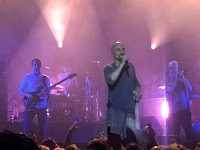 Better Than That is next and Tim comes down to the barrier and then misses his cue as he’s trying to get up on to it. James being James this is no drama, and they start back up after Tim tells us this is going to be a better gig than the two in 1991 where they filmed the Seven live video. He ends the song crowd surfing on a sea of arms and with a battery of camera phones pointing at him. As he comes back he chastises the latter playfully, saying that’s the reason Iggy Pop now walks with a limp because he kept being thrown about rather than being carried. Leviathan, another new one follows, and is possibly the best of the lot, particularly when they slow down the journey of the song and then bring it back to life spectacularly.

Scarecrow, from their 1986 debut album Stutter, hasn’t been played live since 1991, and we did think Tim was joking the day before when he told a heckler that they’d been rehearsing, but here it is and it still feels as vital and agitated now as it did back in the day. The lineage between old and new James definitely feels more open and alive now than it has for a long time. Protect Me enjoys a resurrection too, only having been played once since the reformation at the third comeback show. It’s so off the cuff that Tim has lyric crib sheets, to which he tells us we’re so forgiving, but him and Jimmy only have one memory between them these days. 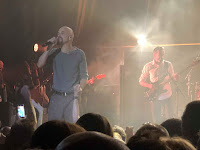 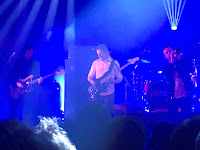 Heads returns us to the new material, something that Tim tells us Morrissey wouldn’t do. Certainly he wouldn’t produce a song like this with punishing bass lines and beats that get the audience clapping along to something, Llandudno attendees apart, they will never have heard before.  How Was It For You gets one of the biggest roars of recognition of the night and this slowed down version feels more potent tonight in this more intimate setting than it did the night before. Curse Curse is gloriously playful, upbeat and sees Tim back amongst us, putting his life in our hands as he’s carried around back towards the sound desk, turned round and then escorted back, all without dropping a word.

Busted follows and is the most beautiful, aching and personal of the new songs and you understand why the band wanted this released even though it didn’t quite fit on the record. It’s got traits of the new sounds of the album, particularly in the breakdown, but equally it wouldn’t feel out of place on something like Laid either. Five-O, opening with an extended violin solo, brings tears to people’s eyes such is the deep emotional investment into the song. As it slowly accelerates it lifts the whole building in a way bands’ album tracks never should, but which James always seem to manage.

Many Faces is introduced as being about Trump’s Mexican wall, but Saul adds that we don’t have to look too far from here to see the racist shit that the song rallies against to huge cheers. The “there’s only one human race, many faces, everybody belongs here” section is sure to be a future singalong once people are familiar with it, but for now, before that happens, it’s wonderful to appreciate it as it’s been written.

Tim’s off into the crowd again for Born Of Frustration, but this time he scales the speaker stacks and climbs on to the balcony where he stops to dance with people as he makes his way round to be met by Andy who’s entered at the other side. There’s a moment where they stand face to face, vocal soaring with the trumpet call, and then they pass and complete their circle. The main set finishes with an ecstatic Come Home that transforms this corner of Cheshire into a heaving Manchester night club for the final five minutes. 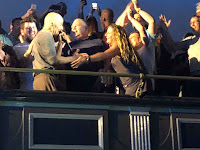 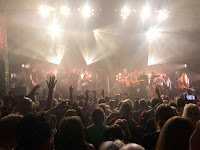 Sometimes, as the previous night, opens the encore, but tonight Lanterns On The Lake join them on stage to give extra vocal lift to what’s now undoubtedly the band’s anthem. They’re still managing to create the euphoric atmosphere that the song generates without it slipping into repetition or Pavlov’s dog syndrome – Tim asks the question how they follow that, but they then answer their own question. Nothing But Love follows and has the spark that was missing the previous night, the backing vocals, so crucial to the song, are back up in the mix and gives it that joyful lift that reflects the words of the triumphant chorus.

Getting Away With It (All Messed Up) and Laid complete the encore. The latter is almost performed twice, first slow then fast and that’s the majesty of this relatively simple (by James standards) song whose exclusion on the last tour seemed to generate more angst than Sit Down being dropped. It leaves everyone streaming out buzzing, not just at a set of old favourites, but also at the promise of a new album that will be James, but, like each time they reinvent themselves on a new record, not quite how we know them.

James played Hank, Coming Home Pt 2, Gone Baby Gone, Moving On, Ring The Bells, Better Than That, Leviathan, Scarecrow, Protect Me, Heads, How Was It For You, Curse Curse, Busted, Five-O, Many Faces, Born Of Frustration, Come Home, Sometimes, Nothing But Love, Getting Away With It (All Messed Up) and Laid.

Better Than That / Busted / Broken By The Hurt / Hank

And read about the new album Living In Extraordinary Times here.

Email ThisBlogThis!Share to TwitterShare to FacebookShare to Pinterest
Labels: James, Lanterns On The Lake