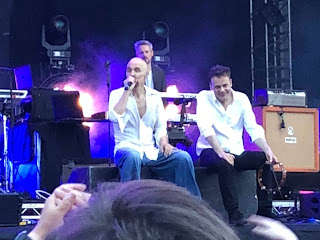 James started their festival season with the Southampton leg of the Common People festival. A co-headline slot with Lily Allen saw them given an hour and a quarter slot, enough to allow them to introduce an all-ages crowd to new material from their Living In Extraordinary Times album as well as deliver them some old favourites.

It's a slightly surreal set of surroundings as James took to the stage on Southampton Common. The main stage line-up - The Sherlocks, Sparks, All Saints, James and Lily Allen - feels like it's catering for a family festival, but not all members of that family at the same time. James haven't been to Southampton since 1997 and despite the town's strong independent scene (with the brilliant Joiners club at the fore), it's not really on the national gig circuit and recently lost its HMV store. As a result, the festival's busy but not packed. 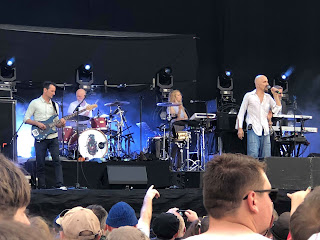 The weather forecast predicted thunderstorms and just as they finish their last preparations, huge drops of rain start to fall and it threatens to become a downpour to make some of the summery outfits on show look very inadequate. Thankfully it holds off so the summer vibe that's run through the day continues.

The set starts with Hank. And it sets a curious tone for the gig. Ordinarily you'd expect the new songs to get the least reaction at a festival like this, understandably so of course, but the minute the multiple drums kick in, the crowd react. Even without the benefit of the impact of the lights it's a powerful opening to the set. Better Than That gets a similar reception, particularly when Tim comes down to the crowd, finds a friendly face and strong arm, to hold him on the barrier and prevent him being dragged in, but again there's something in the strength of these songs, driven by the power of the percussion and the lift of the backing vocals being added to the James cauldron. So rather bizarrely they get at least as good a reaction around us than "the happy song about death" Moving On which follows it, Tim telling us at the end that "no one told me death could be beautiful too." 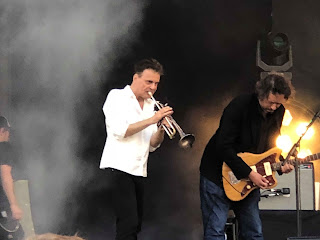 Tomorrow gets some cheers of recognition, despite people around us who have no concept of set build to a climax, demanding Sit Down already.  Tim heads across to Saul and sings directly at him, whilst Saul head down focused ignores him completely, engrossed in the moment. It's followed by Coming Home Pt 2, described at the end by Tim as the next single and the first time they've written a sequel. Of the new songs we've heard so far, with the possible exception of Many Faces, it's got the closest lineage to James' past, the building verse and the soaring lift of the chorus. "You might know this one" Tim says as the unmistakable opening notes of Out To Get You pierce the humid atmosphere. It appears not as many as he thought do, but it leaves us pondering the fact that, playing a set to an audience that know little of James' catalogue other than the four big ones towards the end, it's the new songs that make the strongest connection.

Many Faces is introduced as being about the wall Trump wanted to build on the Mexican border and all the racist bullshit surrounding it. It's still got the magic of a song that the band are learning to play live, an extra chorus coming in the middle of the first verse, where any other band would be trying to replicate the album version verbatim, but no one knows any different. It's going to end up as a big singalong at the end by the time the album comes out. 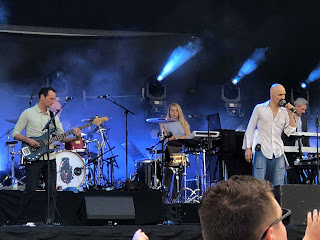 Next up is Getting Away With It (All Messed Up) and sandwiched between Many Faces and Heads, it serves as a reminder, if any was needed, just how much the James of 2018 vintage has developed sonically from what went before. Heads is visually as well as aurally stunning, whether it be Tim's dramatic delivery, the sight of Saul and Debbie on drums or Adrian on cello, or its staccato and razor-sharp edges.

James are festival veterans though and know that however much you experiment with the set, you need to leave the crowd with big hitters. Come Home sees him out amongst us, on the barrier and then crowd surfing, a particularly brave move here where there's likely to be more wanting to capture an iPhone moment rather than holding him up. 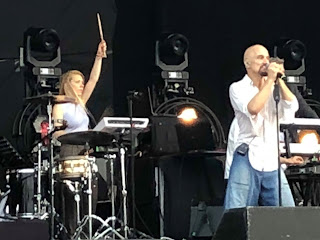 There's some confusion then about how long they have left and there's a quick change of plan as Sometimes is seemingly brought forward in the set, Tim telling us they should have done it when it threatened to rain. Most of the band line up along the front of the stage, including Debbie who goes full on rock star with her guitar playing, while Tim directs us to Adrian's superb guitar solo before the song comes back to its communal ending where there's a touching moment where Saul brings his daughter on stage and sings with her around the mic crouched down so he can look into her eyes. Around us in the crowd, friends recreate that moment and that's the magic of the song. 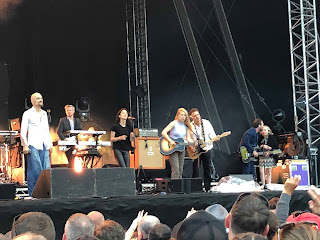 They start up the opening bars of Laid, the crowd start to bounce and things come to a crashing halt. "Well that was stunningly dramatic" Tim laughs, but as they kick back in, no one minds in the slightest as the crowd finally start to bounce around. Nothing But Love sees a sea of arms raised aloft as the song's sentiment captures the crowd's attention.

"We weren't going to play this, but seeing as we've got extra time, just this once but you can't tell anyone" is possibly the least mysterious introduction to a song ever, but the Southampton crowd go bonkers as the opening bars of Sit Down strike up. "Let's mess with it" Tim urges the others, and the great thing about this song being played so rarely is that when it is it's always different, almost freeform in its nature.

As it reaches the breakdown, Tim and Andy perch themselves on the monitor and Tim tells us "let's sing this for Liverpool Football Club" unaware that Mo Salah, for whom the song has been adapted by their fans, is already sat down next to Klopp on the bench and Karius was about to find himself ridiculous. It sates those unfamiliar with the extensive James back catalogue and sends them away to the beer tents continuing to sing it way after the band have departed.

Details of their upcoming Living In Extraordinary Times album can be found here.