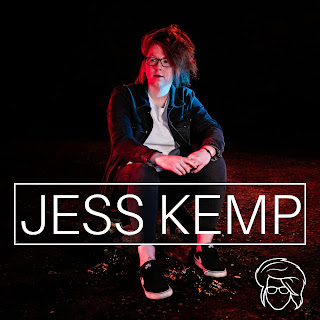 Jess Kemp releases her latest single No Shouting / On The Ground today and celebrates with a co-headline show at Manchester's Deaf Institute tonight. We caught up with the proudly independent songwriter for a chat about the two new songs, her songwriting process and how she got into music in the first place.

First of all, could you introduce yourself please and tell us a little about how you got into music?

Hello, well my name is Jess Kemp and I’m a 23 year old singer/songwriter from Irlam, Salford. I’ve been gigging on the Manchester circuit for around 7/8 years now… I remember that because I used to have to leave the pub at 9pm on open mic’s ha!

My first memory of playing music was when I had a guitar passed down from a family friend, it was a white Marlin Seagull and I’ve still got it now hung on the wall in my living room, it’s a proper nice guitar. However, when I inherited it I was far too small to get my arm around the body and play it properly, so I started playing it laid flat across my knee.

As I got a bit older around the age of 12/13 I started to teach myself a couple of chords and then gradually writing some songs… some really embarrassing songs actually but that happens. And yeah, from there, I just carried on writing and playing more gigs, playing where anyone would have me and a few years of that eventually led me to my first time in a studio with Sugar House in St. Helens and the release of my debut single “Stars”.

I then fell in love with recording and self-releasing so then followed my EP “Camden” and the next single “VondelPark” and now we’re here… with “No Shouting” & “On The Ground”.

You’re about to release your new single No Shouting / On The Ground. They’re not your first releases though are they?

Could you give us a little insight into No Shouting please?

I enjoy telling this story for some reason… maybe as I know that secretly some people can relate!
It’s basically about when you’re in a relationship and you’re the person that causes literally allllllll the arguments and all the fall outs, particularly during a night out when you’ve had one too many Coors Lights. Thankfully, I can joke about this now because I feel like I’ve grown up a lot since I originally wrote this song, I definitely hit my teenage hormone years at around 21 and they seem to have been and gone in the space of 2 years haha! The song is a massive apology to my girlfriend after countless argumentative episodes during a time where I was a teenage tearaway ha!

And On The Ground?

On The Ground is probably one of the most honest songs I’ve ever wrote. It tells the story of feeling like you’re giving something your all but getting absolutely nowhere. I try not to get frustrated in this industry and I definitely don’t like airing my frustration through public speaking or social media.. however I felt like having a bit of a moan so I put it in a song! **Fun Fact - This song was originally called "Blood & Gravel” as it hints at a drunken tumble however my 8 year old niece told me that was too gory and said it needed changing.

How do you write songs and develop them into the finished article?

It happens really sporadically, usually when I don’t have the time to sit and write one, like when I’m supposed to be leaving the house in 20 minutes or something.. and then it just falls out so I note everything down chords/lyrics everything and record a voice memo until I’ve got time to sit down again and have another go. With "On The Ground" and "No Shouting” both songs started out this way but I felt like they needed a bit more ‘tude so to speak.. So I took them to my band in rehearsal and from there, we made louder, fuller versions of them ready to go and record in the studio!

You’re headlining the Deaf Institute with Dave Gorman on Friday. Is this your biggest headline show so far and are you looking forward to playing one of the city’s most iconic venues?

Finally, how would you describe your music to someone who’s never heard of you before?

Acoustic fronted indie-pop I think was the latest phrase I came up with! Looking at the setlist for Friday too, you’re not going to be standing still much! It’s going to be big!!