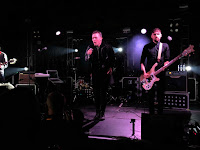 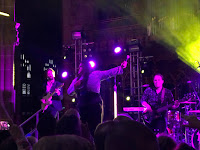 On the day of release of their third album Build A Tower The Slow Readers Club played the iconic Manchester Cathedral, a show that sold out under an hour on presale alone. With a nineteen song set featuring all but one of the ten tracks off the album and a selection of old favourites, Manchester celebrated their newest favourite sons in style. Support came from Doncaster’s favourites Bang Bang Romeo.

Since signing to a major label Bang Bang Romeo’s star has been in the ascendancy. It’s just over two years since these two bands played together at a tiny theatre across town so some of the crowd are familar with them, but by the end they’ve won over a whole raft of new fans. Songs like Johannesburg, Chemical, Invitation and the set closer Adore Me are instantly memorable, aided by the passionate performance of the irrepressible Anastasia and her mightily impressive set of lungs and the band’s engaging stage personalities.

The roar that greets READERS coming on to stage shook the very rafters of the building, to the point that Aaron comments there are small bits falling from the roof, and it’s immediately clear this is going to be an incredibly special night of celebration of a band that’s got here against the odds with little support outside the band’s own tight knit network of friends and family. Now they’ve got the city and the world falling at their feet. Build A Tower is a glorious statement. They’ve delivered their finest work to date when the pressure has been on for the first time. The new songs already sound assured, bold and confident as they’ve elbowed aside old favourites in the set and feel like they’ve been around for years. Very few bands can make that claim playing a record no one has had more than a few hours time with. 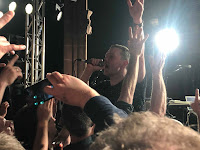 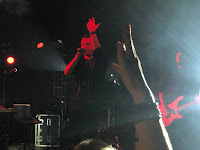 The Cathedral sound, at least down the front, is the best we’ve ever heard. There’s a nice echoey reverb that works perfectly to accentuate the band’s increasingly expansive canon of anthemic tracks. The slower ones, like Never Said I Was The Only One where Aaron takes to the keyboards and Through The Shadows, take on particular poignancy whilst their two breakthrough singles Lunatic and You Opened Up My Heart sound every bit the game changers they’ve become. On The TV which has the potential to outstrip both of them has the crowd replicating the now infamous Starkie stomp and arms held aloft clapping along in glorious unison, Aaron telling us at the end it’s the best response they’ve ever had to a new song, whilst Distant Memory, Build A Tower’s crowning glory, builds and then soars for the last ninety seconds of magnificent sonic cacophony.

The old songs don’t take it lying down of course, standing up for the old order. Start Again packs a punch more powerful than ever before, the crowd mimicking Aaron’s clock like arm movement as he declares “time will come to take its toll.” One More Minute, prima facie evidence that their success is way way overdue, is so belligerent it’s impossible to resist its charms whilst I Saw A Ghost and Forever In Your Debt, which conclude the main set and encore respectively simply put the roof on the top of the skyscraping tower they’ve built. 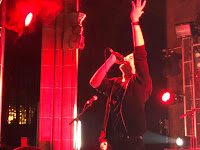 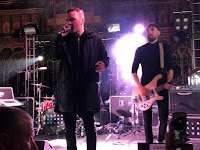 They’ve achieved all this whilst remaining as humble and approachable as when they were playing the smaller venues of the northern quarter to the diehard few who can’t stop grinning at what’s happening here as evidenced by the snaking queues at the merchandise desk at the end for signings and in Aaron's genuine joy at seeing his and his friends' album on sale out front in Piccadilly Records and HMV. Aaron sounds more confident and powerful than ever, his voice moving from stadium filler to intimate and heartwrenching without breaking sweat, coming down to barrier to celebrate with us. Behind them, Kurtis exudes effortless cool, Jim never stops dancing foot to foot and David delivers the pummelling beats that lead the dance.

The Slow Readers Club’s time is now. Nights like this are the sort that will go down in the already colourful history of this city’s music scene. Never has success been so deserved, so worked hard for with a steadfast unerring belief in the music and its power. The only question now is how far can they go.

The Slow Readers Club played Lunatic, Supernatural, Fool For Your Philosophy, Sirens, Lives Never Known, Plant The Seed, One More Minute, Never Said I Was The Only One, Through The Shadows, Start Again, On The TV, Not Afraid Of The Dark, Feet On Fire, Block Out The Sun, Distant Memory, I Saw A Ghost, Cavalcade, You Opened Up My Heart and Forever In Your Debt.

Build A Tower is out on now on CD, cassette, cherry red vinyl and a limited edition marigold and black vinyl exclusive to their website. On the same day they also release a CD and vinyl version of their six song set recorded with Joe Duddell and a string quartet at Festival No 6 last September.