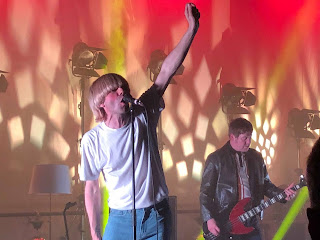 Returning home for a week-long festival to celebrate their hometown of Northwich, now called North By Northwich in honour of the Austin festival, The Charlatans played the first of four sold out nights at the town’s Memorial Court with a career spanning set from their debut album Some Friendly right through to two tracks from their forthcoming EP Totally Eclipsing, from which two tracks are debuted tonight.

The Memorial Court is the sort of venue that thirty years ago might have found itself on the occasional gig circuit, but in these days of big city gigs, towns like Northwich are starved of the sort of shows that would inspire its kids to form a band. Venues like The Salty Dog, that are hosting hand-picked bands each night, are fighting the good fight, but North By Northwich is aiming at redressing the balance.

With four nights to play and many of their dedicated audience here for the duration, there’s some tough setlist choices to make between sating the casual fans’ desire to hear the big anthems of the nineties and pleasing the hardcore’s love of the newer material, which extends to a warm response for the two brand new songs, and the band’s desire to remain challenging to both the audience and themselves. 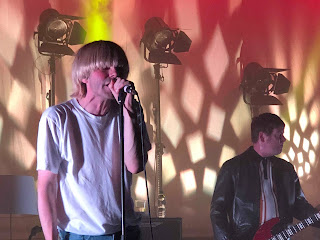 As a result many of their biggest tracks - Just When You’re Thinkin Things Over, Weirdo, One To Another, North Country Boy and How High - are present and correct and get an ecstatic response with the centre of the pit becoming one sweating heaving mass of bodies and a sea of arms from the traditional night closer Sproston Green. Yet, for a band with three decades of material under their belt, there’s plenty saved for the other nights too.

In their place is much of the new material that the band is equally proud of. So Oh, Talking In Tones and Different Days are songs that don’t feel out of place amongst the chart veterans and Let The Good Times Be Never Ending feels like the perfect anthem for this phase of the band’s career. The two new songs - Indefinitely In Your Debt and Totally Eclipsing, both played to a live audience for the first time - show that their creative juices are not being diluted even if the chart positions are being served up in one of the new bars down the road. Tim’s energy levels never drop and you sense that they’re still pushing their own boundaries in songwriting.

There’s time for a few rarities. Bird is a strange choice as it’s been played less than a handful of times, whilst the likes of Another Rider Goes Up In Flames and Up To Our Hips’ lead-in single I Never Want An Easy Life (If Me And He Were Ever To Get There) make welcome returns. 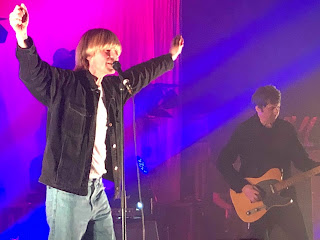 Tim’s on great form all night, constantly encouraging the crowd to get moving, get involved and to sing along. They take a little while to warm up as it’s a Monday and partly because of some niggling sound issues that take a few songs to resolve but his boundless enthusiasm is somewhat infectious and draws people in so that by the end, as Sproston Green starts with its extended instrumental and concludes in a similarly euphoric manner from the stage, everyone is in the moment. He politely dismisses football chants with “they’re a good team” and seeks to acknowledge all four corners of the room. There is, as ever, little showmanship from the rest of the band but that would be alien to their philosophy.

Night one down and we have to applaud what The Charlatans are doing here. They’ve turned this into an event that showcases so much, celebrates a lot and gives Northwich a place on the map again and nights like this that people will talk about in town folklore.

The Charlatans played Forever, So Oh, Just When You’re Thinkin’ Things Over, Plastic Machinery, Indefinitely In Your Debt, Weirdo, Another Rider Up In Flames, Come Home Baby, Bullet Comes, One To Another, Talking In Tones, Bird, Totally Eclipsing, Let The Good Times Be Never Ending, North Country Boy, How High, Different Days, I Never Wanted An Easy Life (If Me And He Were Ever To Get There) and Sproston Green