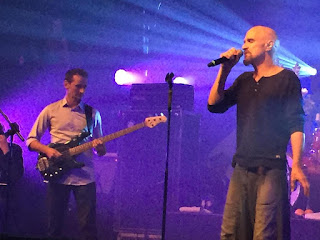 Stuart Ralston ventures to the picturesque Scottish town of Oban on a beautiful summer's evening to catch old favourites James, and witnesses something spectacular.

“Thank you for a fucking great evening” announces singer Tim Booth at the end of a marathon, exhilarating, roasting two hour James set during which they showcased seven spectacular new songs, revisited favourites and reworked others. A mesmerising experience.

My first James gig for two years! And, what a way to welcome them back. The Corran Halls in Oban is a heaving sweating mess by the end of the evening. James didn't do a best of set, or a crowd pleasing set, or a going through the motions set. Instead, they do what they do best. As a veteran of the legendary Barrowland gigs, I can honestly say tonight's show is up there with the best of them.

Opening with the Section 25 influenced new one Hank, most of the band knock out a tribal beat. It's an impressive opening and one which demonstrates that the band are willing to test the audience.  Jim's bass line is more imposing and menacing than ever. Out front, Tim delivers traditional James  lyrics, attacking the Trump based world we now find ourselves in. James 2018 mean business and are light years ahead of where they were when Girl... was released two years ago. 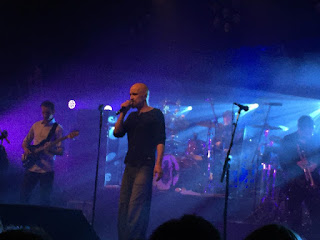 Tim announces What's It All About as a little bit more psychedelic (that Hank). On first listen, it lies somewhere between Laid and Whiplash era James and still has a rawness and an energy and a fragility about it. Tim sings like he means it. At times ,What's It All About features some beautiful orchestration with Adrian on cello (as he is on many of tonight's songs) before ending with just Adrian by now switching to an acoustic guitar and Tim's vocals. There is a lot going in there in just the one song. These early indications are that the new album is going to be something special indeed. For many of the assembled crowd however, this near fifteen minute opening gambit proves too much and incessant chatter ensues.

Whilst I draw breath, the more casual fan laps up 1997 single Waltzing Along. Not my favourite James moment but it galvanises the crowd and shifts the show up a gear.  They keep up the pace with a blistering Say Something and by now everyone in the room is singing along as one. A truly uplifting experience. The Shining from the underrated Pleased To Meet You album is yet another cue for chatter from some. It's a revelation and takes me back to that stunning new songs tour from 2000 where the band were throwing loads of new songs at the audiences each and every night. PS follows. Like The Shining, it wasn't a single but has an endearing quality. These two tracks show just what depth James have in their back catalogue. Both are delivered with a real passion. At the back drummer David Baynton-Power has never sounded so good. For a hall that rarely sees bands like James, the sound is superb.

A trio of new ones follow – Heads, Coming Home Part 2 and Leviathan. Heads attacks the current political climate again and features yet more tribal drumming and is well received by the crowd. Coming Home Part 2 sounds absolutely delightful – there's a lot in there musically and lyrically and the new album can't come quick enough. New percussionist Deborah is introduced by Tim midway through the show and she is a revelation, adding yet another dimension to the band. I can't really split the new ones – they are all potential singles and  Leviathan is no exception. Perhaps it is closest in sound to that which they carved out on the last album.

I can't believe that I'm here listening to Scarecrow. Whilst it has featured in sets earlier this week, I'm ecstatic to finally hear it live again. It's older than some of the audience. Simple and basic with added trumpet flourishes from Andy Diagram, it could easily be the highlight of the set “still pretty good” quips Tim. A reworked, slowed down How Was It For You? sees the band improvise whilst Tim goes on a rather successful crowd surf. Fred Astaire is similarly stripped back and features one of Tim's best vocals of the night. Many Faces is introduced as one we will all love when the album comes out but then the most incredible thing happens. By the end of the song, the whole room are already singing the chorus back to the band - ”There's only one human race, many faces, everybody belongs here”. Incredible. 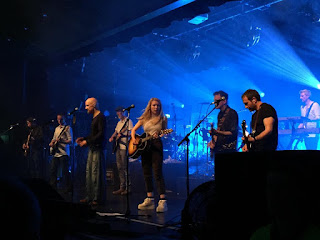 Better Than That sounds already like an old favourite. Perhaps the most uplifting of the new ones. Anthemic, catchy, and sounding superb in the live environment. Another winner. One of many winner tonight. Each and every bit hitter they roll out hits the spot – Getting Away With It, Born of Frustration, Sometimes. Indeed, the crowd even begin Sometimes a full two minutes before the band begin playing. Sometimes is as uplifting as it has ever sounded with everyone in the band on guitar and Lanterns on The Lake joining in on vocals too. A magnificent celebration.

Moving On and  Attention are mixed in with the closing numbers and both sound outstanding. Mark Hunter in particular stars on the latter, creating an expanded version to that which is found on record. Moving On sees another emotional crowd response before Laid brings the show to a close. It's so good, they play it twice – first the slow, stripped back version before launching into the frantic pop single.

I had my reservations about tonight. They were well and truly dismissed about twenty seconds in however. This is James, doing what James do. A stunning team performance where they tested each other and they tested the audience throughout the entire two hour show. The musicianship is incredible. Saul Davies has a quiet night but oozes cool , Adrian Oxaal is truly stunned by the audience reaction at times and Andy continues to be intuitive, adding glittering touches to many of the songs.

Tim compared the Corran Hall to the Barrowland at one point. The heat and the passion generated in there tonight by band and fans matched or even surpassed those shows that are remembered so fondly.

Details of their upcoming Living In Extraordinary Times album can be found here.