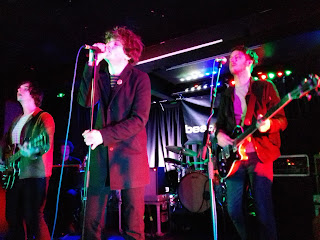 Still touring in support of last year's highly praised Strange Hymns album, Neon Waltz begin a short Scottish tour, starting tonight in Dundee. The six piece from John O Groats play a stunning set, opening with the dynamic and anthemic Perfect Frame. At the back, holding it all together is the amazing powerhouse drumming of Darren Coghill. As the band immediately fire into Strung Up, guitarists Kevin and Jamie create a beautiful psychedelic swirl. Folklore slows the pace down slightly as frontman Jordan Shearer owns the stage.

School House, from their new EP, sees a slight change in direction for the band. The song is built around a delicate keyboard arpeggio before Sundial injects pace once again. The band fall silent as Calvin Wilson swaps his bass for an acoustic guitar to duet with Jordan on the delightful I Fall Asleep. One of highlights of the set yet missed by so many who take it as their cue to talk.

Sombre Fayre and the stunning Bare Wood Aisles sees the band back on familiar territory. Like the best Neon Waltz songs, Bare Wood Aisles is a classic. With choppy riffs and hazy keyboard swirls and more of Coghill's wonder beats, it is the set highlight.

Heavy Heartless is darker and more reflective than the rest yet retaining just enough to be an anthem and sees the audience join in. Dreamers sees the band shift up a gear and the audience are finally stunned into silence and sing along with Jordan as one. The cheers at the end say it all.

Bring Me To Light draws the 45 minute set to a close. A fast paced, Primal Scream influenced rocker it sends the all-ages crowd home happy. For Neon Waltz, the hard work is paying off. The fan base continues to grow and fall in love with their unique sound.