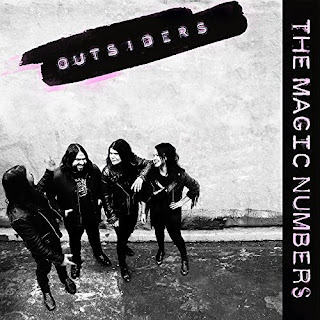 The Magic Numbers return with their fifth album Outsiders, their first since 2014's Alias. Whilst their commercial star might have dimmed since they burst onto the scene over a decade ago, they come out fighting with the best record of their career to date.

The Magic Numbers still suffer from the classic debut album syndrome. Destined to be always remembered most fondly by the masses for that self-titled opening shot, particularly the two big singles Forever Lost and Love Me Like You, they're fighting an at times futile battle to shake that albatross when it comes to releasing new material. Which is a real pity as Outsiders is possibly their best work to date, the ten songs bathe in the band's love of uplifting harmonies and sixties and seventies melodies, but they stamp their own larger-than-life personalities over them. Where you might be able to point the finger at them for over-elaboration in the past, there's no such concerns on this record.

Shotgun Wedding sets their stall out from the start, the opening line "this is our love, don't steal, you keep twisting the knife I can't feel" dictating the vibe of the song which runs right through the centre of it. The production is crisp, unfussy, as it is across the whole album, which allows everything to be heard as it was intended and encourages them to keep things simple. Romeo's lead vocals have never sounded as rich, deep and confident as they do here, as on Ride Against The Wind as he tells the stories of those who refuse to conform with an affinity and sense of togetherness. There's flashes of guitar and brass and the traditional layers of vocals from Michele and Angela which make it one of the strongest songs they've ever put out.

Runaways might slow things down a bit, but that doesn't compromise anything that's gone before, if anything it accentuates the emotional warmth of the record as Romeo ponders age-old questions about love and life - "baby you've got to nothing to prove, can't you see in my eyes I'm just as reckless as you." The chorus of Sweet Divide as their voices intertwine and lift the song outof its seat and the listener out of their comfort zone is one of the album's high points, if not their entire career's, followed by a guitar solo that's got a much harder edge to it than you'd traditionally expect from them. It then almost becomes a different song as Romeo fights a call and response battle with Angela and Michele over the line "coming out of the shadows running" before brass and then the chorus kick back in. There's so many ideas here, but rather than feeling cluttered as they've often done on previous record, here they feel like they're joined seamlessly and pulling in the same direction.

Wayward has an almost country-feel to it and there's a richness of emotion to Romeo's voice across its two and a half minutes that gives it a timeless feel and both unsettles the listener and leaves you feeling that everything's going to be alright in the end. The Keeper, which clocks in under three minutes, another sign of the slimmed down approach to their songs, is a playful Wurlitzer of a track, touching on new ground for the band without losing those melodic and harmonic qualities that have kept them a smaller but ever more dedicated fan base over the years.

Dreamer is another song that simply envelops the listener in beautiful affecting harmonies, the sort that make the heart skip a beat and join the search for answers to the question they pose "heartache why won't you leave us behind?" A wistful guitar skips around in the background as Romeo ponders more questions on Power Lines, but retains a positive outlook as he declares "these are hard times and we can make it through these hard times."

Lost Children is even more sparse and stripped down, a deep and personal delve into the deepest recesses of Romeo's soul, declaring "we're all lost children waiting to be found" and whilst it's dark and foreboding in parts, you sense that everything will be alright. The album concludes with the brooding and claustrophobic Sing Me A Rebel Song which demands "a song that's going to save my life tonight."

The Magic Numbers had two options as they surveyed where they stand today; either go down the classic album tour route for easy money and a short to medium term boost to the popularity or to hide themselves away and produce the best record of their career. If you're looking for another Forever Lost then this isn't the record for you as they've unequivocally done the latter, even cheekily referencing the fact in the album's title.

The album Outsiders is being sold via the band's Pledge Music campaign.