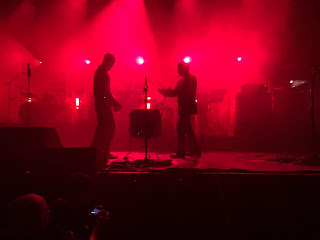 James continued their Better Than That tour with a sold-out Saturday night show at Blackburn's King George's Hall, a venue they hadn't visited for twenty-seven years. Dan Starr was at the show for us and reports back on a night of new songs and old favourites. Support came from Lanterns On The Lake.


Let's get this over with right away. This was a standout gig, maybe the best that this reviewer has seen James do in the last decade. It was that good. King George’s Hall in Blackburn was on fire with passionate love.

James are supported on this tour by Lanterns On The Lake. Sometimes support bands are given short shrift by an audience who are only there for the main act, particularly on rowdier Friday and Saturday nights. But because James has only selected small venues for this tour, most of the tickets were snapped up by hard-core fans who seem to appreciate the support acts that the band select; and with some fans doing multiple shows, it was clear that many already knew and appreciated Lanterns. They played a strong set that built upon itself to an intense crescendo that got the crowd warmed up for the main event. 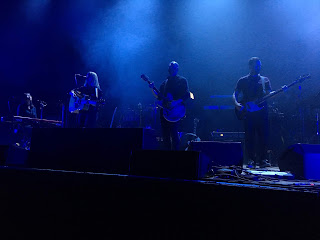 The interlude was relatively short, and with the lights down low, James erupted from the dark with a primeval percussive explosion that was a signal of what was to come. As at the previous two shows, they started with Hank, with and Tim, Andy, Saul, Dave and new member Debbie Knox-Hewson all pounding the rhythm on drums. Hank is a great opener; not only because it builds, but the lyrics show a raw passion and zeal that takes the band to a new level. The new material, and different drum-heavy arrangements of fan-favourites, power the band and crowd through the first act of six songs. Even the normally light and frothy Gone Baby Gone has a new and better darker urgency to it. Make no mistake, this band are angry about the world and hungry to be listened to. As a side-note, the light show was also spectacular, and the daisy floodlights a nice touch.

New song Busted, from the current EP, marks the move to the second act that give the band and fans a chance to catch their breath. Busted already feels like an old friend with Andy's signature trumpet soaring and lifting Tim's melodies even higher. Hot on the heals are Coming Home (Pt.2) and Leviathan. This hat-trick of new songs are bedding down well and show that fans are for a treat when the new album is released in August. James always pull out the odd forgotten gem, and polish it. For this tour they’ve resurrected Scarecrow from 1986’s Stutter, which they last played live an unbelievable 27 years ago. It gets a great reception from the crowd, with the new underlying percussion arrangement giving it a modern shine.

Newbie song Many Faces was next, but with a different calypso-inspired arrangement from its premier at the Manchester Albert Hall last December. The new arrangement works well, creating a happy and relaxed mood to propel the crowd in to Moving On. Moving On was a superb rendition, with Tim reaching over the barrier to sing directly to audience members. You can tell he gets as much from these passing moments as the fans. I might have got something in my eye at this point; it was that good. 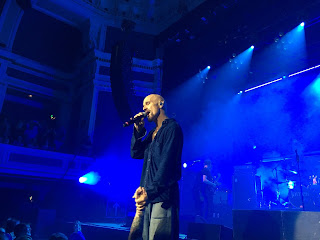 James then crank it up for the romp thought the final third act. Tim dives into the audience for How Was It For You and is surfed aloft almost right round the King George’s Hall. Born Of Frustration provides more audience interaction as Andy pops up around the balcony like a manic trumpeting troubadour. And Attention is even better with the stronger drum beats that are the new band trademark.

Things then screech to a halt in true James style. Tim announces that he’s had a note from ‘Simon’ in the audience who’d like to say something. Simon duly sticks his hand up and he and his wife are extracted on to the stage. Simon thanks Tim for helping him celebrate his 40th birthday, at which point there is some head-scratching and Tim announces that he’s got the wrong Simon. The wrong Simon is dispatched and right Simon is duly found, given the microphone, and proposes to his partner Ann, who thankfully accepts; and the band then launch into Nothing But Love. James fans love these all messed up moments.

For the final two of the main set, the crowd are up, moving and singing for the current single Better Than That and Come Home. The audience keep singing all the way through the encore, which is started by fan favourite Sometimes on seven guitars, and followed by Simon’s theme-tune of the night, Getting Away With It (All Messed Up). The only acoustic part of the night is Saul’s start to the final song Laid, which soon kicks off and leaves everyone cheering for more.

It seems as if this small-venue tour has electrified and reenergised the band. Tim hasn’t looked more relaxed in years, and it really shows in the performance and fan interaction. The perpetual undercurrent of drums that Debbie Knox-Hewson brings throughout, imbues energy that drives things forward, leaving both Tim and the audience exhausted but elated at the end. That was a belter of a gig. Bells are still ringing in my ears.

James played Hank, To My Surprise, Gone Baby Gone, Heads, Ring The Bells, Walk Like You, Busted, Coming Home Pt 2, Leviathan, Scarecrow, Many Faces, Moving On, How Was It For You?, Born Of Frustration, Attention, Nothing But Love, Better Than That, Come Home, Sometimes, Getting Away With It (All Messed Up) and Laid.

Better Than That / Busted / Broken By The Hurt / Hank

And read about the new album Living In Extraordinary Times here.

Email ThisBlogThis!Share to TwitterShare to FacebookShare to Pinterest
Labels: James, Lanterns On The Lake